Carey and daughter Monroe got ready for the ceremony at the Dream Suite, an exclusive hotel room located above the Pirates of the Caribbean ride. Wearing princess-inspired gowns, Carey (dressed as Cinderella) and Monroe rode in a Cinderella-style horse-drawn carriage to Main Street, where Cannon and son Moroccan were waiting (both were dressed in Prince Charming costumes).

Cannon walked Carey and the twins down the aisle to the front of Sleeping Beauty's Castle, which was the backdrop of the ceremony. Cinderella's Royal Footman officiated the ceremony (attended by 250 guests), which concluded with a fireworks display.

The guests were escorted to Fantasyland for the reception, which was decorated with 15,000 flowers and 10,000 crystals. Cannon DJ'd the event, and guests also rode the Matterhorn Bobsleds, the King Arthur Carousel, Peter Pan's Flight and Snow White's Scary Adventures.

The carriage picked up Cannon and Carey returned them to the Dream Suite at the end of the night. 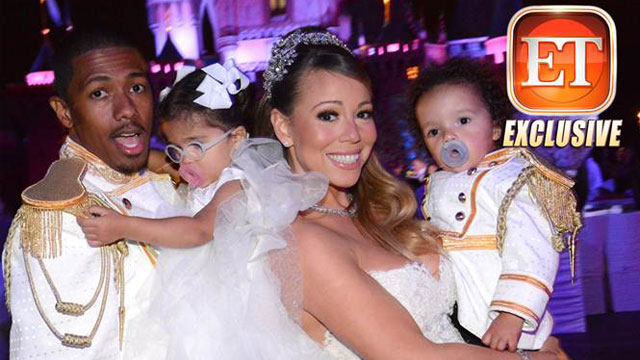 Carey makes her way to her guests:

Entertainment Tonight also reported that Monroe and Moroccan celebrated their second birthday at the Fantasy Faire section of the park earlier in the evening with 150 guests.

Carey and Cannon have renewed their vows every year since they married in 2008. After dating for less than two months, they tied the knot in the Bahamas in 2008; then, they re-wed in the Maldives in 2009, at their Beverly Hills home in 2010, in the hospital in 2011 (Cannon was being treated for mild kidney failure), and at the Eiffel Tower in 2012.

Click through the slideshow below to see photos of Carey and Cannon's Eiffel Tower vow renewal ceremony.

Love Is In The Air Again