As Taylor Swift and Nicki Minaj work through their bad blood, there's no better time to take stock of how artists, fans, and critics snub and snipe at one another. Amid clashes in the music world, are we leaving enough room for celebration and compassion? 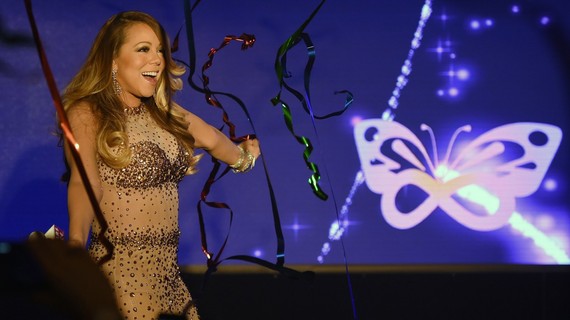 This month, Mariah Carey kicked off the summer stretch of her Las Vegas residency with the concert series Mariah Carey #1 to Infinity, featuring the singer's 18 No. 1 U.S. hits (1990-2008). Fans packed the Caesar's Palace auditorium, twittering and tweeting with anticipation before the show, then erupting in screams as soon as the faintest silhouette of the diva materialized on stage. Carey's supersonic vocals, flashy props, and electrified audience came together for a virtuosic production from beginning to end.

I went to the show not so much as a musicologist (my profession), but as a fan. I yearned to hear some of my favorite Mariah pop hits and power ballades, the songs I played on a loop on my Discman during carefree childhood and angsty adolescence. Listening to Carey's chronological, live renditions of Billboard-topping songs, I succumbed to an overdose of nostalgia.

But throughout the night, as Carey's colossal voice made me break out into goofy grins and unabashed tears, a tiny voice chirped in the back of my mind. No, not my conscience: rather, it was Jon Caramanica's scathing New York Times review of Carey's Vegas debut back in May. I stumbled across this review before coming to see Carey for myself. In his narrative, Caramanica bemoaned Mariah as a fallen legend, a singer who was once "something superhuman," but now, mere "decaying manufacturing machinery." He fixated on Carey's struggle with her signature high notes, as have several other critics (see here, here, here, and here).

Yes, it's the job of music critics to pick at details and submit concrete opinions. Yet let's face it: when judging musicians, we pick on things like pitch and intonation not least because it's easy to do so -- literally as easy as A, B, C. We have standard vocabularies for such technicalities, and it's effortless to pick on high notes precisely because they're so hard to hit. With weekly diets of American Idol, The Voice, and America's Got Talent, everyone these days can feel like experts when it comes to assessing singers. If Randy Jackson can blithely say "pitchy" as a catch-all appraisal of countless Idol contestants, surely we can too.

In our Internet era's culture of humiliation, people jump at opportunities to shame singers who sound off, as with last year's leaked raw (pre-Auto-Tuned) vocals of Britney Spears. It's "gotcha!" journalism, music edition. 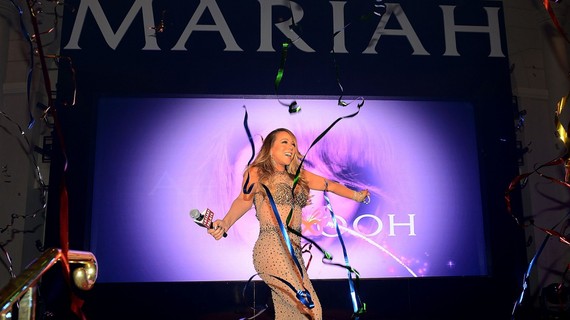 To nitpick that someone sounds sharp or flat can make us feel smart and superior. (Or consider Internet discussion threads and people's tendencies to assail others' grammatical and spelling errors; as with music, commenters seem to obsess over such minutiae only when they don't have anything better to say.) If I wanted to quibble about details, I could point out that Caramanica mistakenly observed how Carey "sang parts of several songs an octave lower than the recordings." Carey, in fact, rarely dropped down full octaves: instead, she frequently came down intervals of 3rds and 6ths (texturally compensated with light melismas), and the occasional bluesy 4th/flat-5th (as in the chorus of "Hero"). But I won't quibble, since to me, these details are uninteresting.

Because so what if Mariah Carey indeed can no longer belt out accurate high notes like she once could? With her multi-decade career, she has taxed her vocal cords to the max. If her voice today sounds relatively strained--a stark matter of anatomy and aging (what musicologists who study disability might call "late style," e.g., concerning Beethoven's deafness) -- it's not her responsibility to somehow regain the able-voicedness she once possessed. No: it falls on us, the listeners, to listen to this difference differently, compassionately. Fans, of all people, understand this best. At the concert I attended, audience members cheered (a particularly shrill man in the row behind me kept shouting "I love you!" and "You're perfection!") even in moments when Carey sounded imperfect. They did so not because they necessarily lacked critical faculties or musical chops, but because they were marching to a different drum, grooving to beats of loyalty and love.

In his review, Caramanica quipped that Carey's "rasp felt like a glitch, not a goal." How many of us, however, can claim we haven't all felt like a glitch from time to time -- out of tune, out of order? Isn't it when we're at our most vulnerable that we most desperately crave acceptance, care, and leeway? Is it possible to measure a singer's merit not by odd notes here and there, but by the metrics of tears, smiles, and inner stirrings? For that matter, did you care whether Barack Obama sang perfectly when he performed "Amazing Grace" at the end of his eulogy for Rev. Clementa Pinckney? Even if we can discern he didn't sing perfectly well (on key, in time), would any of us deny he sang profoundly good (with heart, with purpose)?

You could argue that when you pay good money to see a professional artist, you expect something professional. But I suppose that depends on what we want to get out of a performance, professional or otherwise. Pleasure? Uplift? Edification? Does any of this depend on whether Carey hits her multiple high-high-E's at the end of "Emotions"?

No one likes fair-weather friends -- the people who stick around for the high points, but abandon ship when you need a shoulder to cry on. I'm not sure we should be fair-weather listeners either -- critics who applaud solid high notes, yet cry foul at the first sign of weakness.

Next time you go to a concert where a singer's voice cracks, why not try treating it as a learning opportunity--not for the musician, but for yourself? Ask yourself why you judge and why you care. Contemplate whether your ears have become so entrained to certain tonal and musical standards that you're missing other aural pathways to beauty and truth.