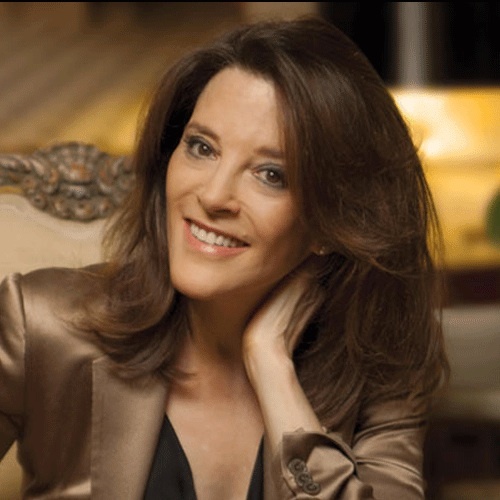 
Marianne Williamson, former Congressional candidate in Southern California (CA-33), is back on the political frontlines. Although Ms. Williamson did not win a seat in the U.S. House of Representatives in last year's election, her campaign initiated a new political conversation. At the end of the month she is taking the conversation to the next level through an event she is hosting in Los Angeles called Sister Giant.

Marianne, who ran on a platform of reducing corporate influence in the political process and bringing more heart and compassion into policy-making, lost the House seat to Ted Lieu, a former California Democratic state senator. While a lifelong Democrat herself, Marianne ran the congressional race as an Independent, making the statement that she was not beholden to either party.

"Policies either have heart or they don't," said Ms. Williamson. "The problem is that politics in America has become a magic show." In our interview, she described how politicians present a heart-rending image to distract us from policies that are filled with anything but heart. First instance, in her words, First Lady Michelle Obama growing a vegetable garden over here so perhaps that will distract us from the fact that Monsanto is given the key to the kingdom to the FDA over there.

"There is nothing loving, compassionate or conscience-filled about fostering economic and social policies that make the rich richer and the poor poorer," she said. "You can't say you are a champion of Main Street and at the same time champion the rights of Wall Street to trample over the interests of ordinary Americans."

Ms. Williamson believes that Americans need to be far more savvy about this. "We need to take a much deeper look at the positions that politicians are taking, not just the fuzzy photographs or one-off images they present," she says.

Sister Giant aims to be a catalyst for building this citizen savviness. At the conference, participants will hear from speakers such as Senator Bernie Sanders (I-VT), civil rights attorney Lisa Bloom, organic food advocate Elizabeth Kucinich, political commentator and activist Cenk Uygur. They will also be able to meet with representatives of organizations who are doing work in the areas that Marianne ran on, such as overturning Citizens United, racial justice, reducing mass incarceration, fighting the encroachment of GMOs in our food supply, and building a more peaceful world.

"Knowledge is power," says Ms. Williamson. "A lot of people feel passionate about getting the money out of politics, but they don't know exactly what to do," she says. "At Sister Giant, they will get clear about what the situation is now and where it needs to be, what the main organizations are that are doing the work, what the exact work is to be done, and how they can plug in."

"When lights go on inside people's minds, everything else takes care of itself. That's why we read great literature, that's why we study philosophy, that's why we create and love art. We are always on the lookout for those activating moments, those big ahas. And when those big ahas occur collectively, extraordinary historical change can happen."

During Ms. Williamson's congressional campaign, she spoke about the de-democratization of America and how we have a system, where over the last few decades, major resources of our country have been siphoned off into the hands of a very few.

"Our founders created a system where governance is to be in the hands of the people. And it would not have been so easy for a corporate elite to take over the reigns the way they have over the last few years had we, the citizens of this country, not abdicated so much of our own responsibility to be vigilant on behalf of democracy," she said.

Ms. Williamson is adamant that there is a limit to what we can do from the sidelines, and that as much as non-profit work and a transformed private sector are important, we still need to take far more seriously our role as conscious citizens.

"We have a presidential election in front of us and I think all of us should be thinking very, very deeply not just about the people who are running, but the actual policies they stand for," she says. "We should educate ourselves. We should read, and we should question."

While Sister Giant started, back in 2010, as a conference for women, helping women understand their place in history and encouraging women to use their political voice and become politically active, it now is a movement of both women and men. "The most important thing is to help expand a more meaningful political conversation, and that simply isn't gender-based," says Ms. Williamson.

Ms. Williamson contends that no one conference is the Answer. But, she says, when a conference is filled with the energy that passionate, conscious people bring to it, then magic happens. "It happens inside us, and we leave the conference having been touched by something."

"It's certainly not something for right now. I think I would know already if there were a calling for anything anytime soon. But I can only know what's true for me now," she says. "It's other people's turn to run now."

Join Sister Giant in Los Angeles, California on March 28-29th and/or via Livestream. Get details here.

Tabby Biddle, M.S. Ed., is a women's leadership mentor and coach, specializing in helping women find their voice. She is the author of the bestselling book, Find Your Voice: A Woman's Call to Action. Learn more at tabbybiddle.com.