Voters in Washington, D.C., Oregon and Alaska followed Colorado and Washington in voting to legalize cannabis for recreational use. The historic votes signal victories for pro-legalization advocates hoping to bring legal cannabis to even more states in 2016.

Cannabis entrepreneurs in Oregon and Alaska, which are slated to open retail pot shops in coming years, say they are thrilled. (D.C.'s measure did not legalize the sale of marijuana.)

"I'm very excited. I've been medicating with marijuana since I was 21 years old," said Mario Mamone, who owns the medical marijuana dispensary Maritime Cafe in Clackamas County, Oregon, and who suffers from back spasms dating to the late 1960s when he was a soldier in Vietnam.

"I've always been afraid I'd be arrested and thrown in jail. But this lifts the stigma," he said.

But it's not all sunshine and roses for the marijuana industry that's developing in the Pacific Northwest. Cannabis entrepreneurs say the way legal weed is being rolled out by state governments can be problematic. Their concerns add to the growing pains experienced by advocates and regulators in trying to figure out the best way to safely regulate the fledgling industry.

For example, Oregon's historic vote on Tuesday won't do much to get Mamone's dispensary back in business. Maritime Cafe, which is located a few miles from downtown Portland and began providing Oregon residents with medical weed in 2011, was forced to close earlier this year when Clackamas County enacted a moratorium on cannabis sales.

"It's put us through some hardship," said Mamone. "We signed a lease on a new, bigger space next door [to our current location] before the moratorium, because we had no idea it was coming."

Mamone said he's been paying his $3,100-a-month rent plus all his bills every month, but the business "hasn't had any revenue since May."

He's been talking to county officials to try to lift the moratorium as soon as possible -- before the scheduled April 2015 end date -- but his business may have to remain shuttered until then.

Meanwhile in Portland, just a few miles away, medical weed is already being sold freely by dozens of medical dispensaries. Under the new law, those dispensaries will be eligible for a license to sell retail pot.

But not all of them are interested in doing that. Sally Bishop, the owner of Green Goddess Remedies, a shop that sells marijuana buds, edibles and THC concentrates, isn't sure she wants to branch out into the retail market, even though it could be lucrative for her and her family.

That's because she fears the retail weed industry will lead to lower-quality pot. 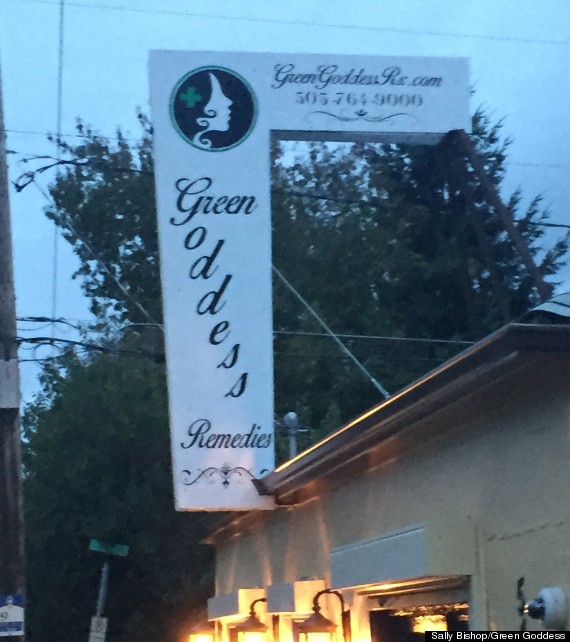 "Retail changes the vibe. It becomes mass consumption. It turns into, like, Budweiser beer," said Bishop, a 49-year-old mother of two. "Whereas, here on the medical marijuana side of things, we have more of a microbrew mentality. Our growers take a lot of pride in what they do."

Oregon's new law will allow anyone 21 and older to possess up to 1 ounce of weed in a public place or 8 ounces at home. But there won't be recreational pot shops in Oregon for another couple of years. The state first must figure out how the system will be regulated and begin the process of issuing licenses to eligible entrepreneurs.

Unlike Washington, Oregon already had a fairly robust medical marijuana system in place when it legalized recreational weed. The state decriminalized pot back in the '70s and legalized it for medical use in 1998. Still, for years, medical patients had to grow their own weed (or have a caregiver grow it for them). Actual medical dispensaries weren't fully authorized to do business until this year.

Since Oregon already has a medical pot system in place -- and because taxes in Oregon will be lower than they currently are in Washington -- retail pot in Oregon is projected to be substantially cheaper than in neighboring Washington. In Oregon, it's predicted to be about $145 per ounce, while in Washington it gets sold for about $20 a gram, which works out to be over $500 per ounce.

In Alaska, things are different. Although the state legalized medical marijuana the same year Oregon did -- 1998 -- it never set up a dispensary system, forcing people to make arrangements to grow their own weed or obtain it on the black market.

As a result, Alaska may face some of the same difficulties that Washington has had in trying to create a dispensary system from scratch.

But pot entrepreneurs in the Last Frontier are still excited. "This is great for Alaska and great for America," said Michael Smith, who owns The Healing Center Medical Clinic in Anchorage, which doesn't sell medical marijuana but instead helps people obtain state-issued cards that let them grow their own.

Smith, 49, says he will definitely be applying for a state license to sell retail weed, but he won't be doing it in Anchorage, where he said he's heard talk of a possible moratorium on pot sales.

"You never know what politicians might do, what kind of pressure they could get from their constituencies," he said. "I mean, the vote here in Alaska was only 52 to 48 [percent], so it was a very close call. There's still a large demographic that could push against this."

Alaska's initiative doesn't allow local governments to criminalize marijuana, but it does allow them to ban the commercial industry.

So Smith bought a space in rural Alaska -- in the Matanuska-Susitna Valley, to be precise -- where he plans to grow and sell recreational weed if he wins a license from the state. He said he's less afraid of a moratorium happening there.

"It's a little more liberal there than in Anchorage," he said. "They have a history up there of growing some well-known strains [of cannabis]. I mean, they've been growing Matanuska Thunderfuck since the '70s. So I think people up there are really going to come out to take advantage of the end of prohibition. And I wish everyone well, I really do."