Thousands of families of critically ill children and advocates for marijuana reform launched a national campaign Wednesday supporting the legalization of certain strains of cannabis oil that have shown therapeutic benefits.

Rep. Scott Perry (R-Pa.) first introduced the Charlotte’s Web Medical Access Act, named for 8-year-old Charlotte Figi, who successfully treats her debilitating seizure disorder with a non-psychoactive form of marijuana, last year. The measure, re-introduced in March after revisions, would remove similar types of medical cannabis from the federal list of Schedule I substances, which the federal government considers to have no medicinal value. All forms of marijuana are currently illegal under federal law.

“We’re not trying to do something fringe here,” Charlotte’s mother, Paige Figi, who's spearheading the campaign, told The Huffington Post by phone in advance of the launch. “This is a human rights issue. This has been lifesaving for my daughter.”

The campaign, dubbed the Coalition for Access Now, kicked off with an event at the National Press Club in Washington. In the coming months, the group plans to educate lawmakers and the public about the benefits of therapeutic hemp oil, which is derived from the marijuana plant and has been used to treat thousands of children with uncontrolled epilepsy.

Before Charlotte began using cannabis oil, she suffered sometimes hundreds of seizures a day. She had been treated with a cocktail of pharmaceuticals that produced an array of side effects, but failed to ease her convulsions. Three years ago, feeling like they were out of options, Figi and her husband learned about a strain of medical marijuana rich in CBD, a compound that doesn’t produce the “high” commonly associated with smoking pot. They decided to try it.

“She’s 99.9 percent seizure-controlled now,” Figi said of her daughter. “She’s walking and talking and going to dance class. It worked.”

Figi decided to share her daughter’s story on Dr. Sanjay Gupta’s groundbreaking CNN documentary “Weed” in 2013. Hundreds of families in similar situations swarmed the family's home in Colorado, where marijuana is legal for both medical and recreational purposes. The purveyors of the strain used to treat Charlotte, which is administered in an oil or capsule form, named it Charlotte’s Web in her honor.

“We had this big influx of medical refugees,” Figi said of the families who upended their lives to relocate to Colorado. “We saw the same thing over and over again. Now, thousands of children are controlling their conditions with this.” 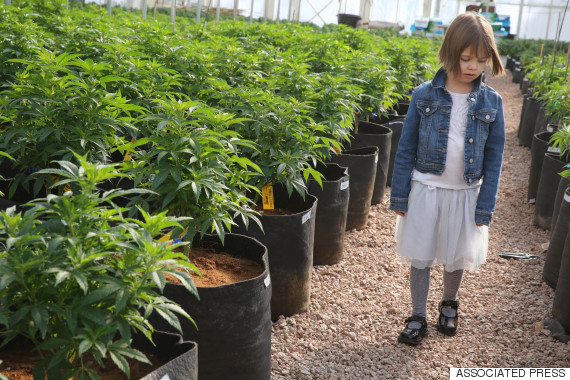 In the year and a half since Charlotte’s story first made waves, 13 states have passed laws allowing children with intractable epilepsy to treat their conditions with CBD-rich strains of cannabis, including conservative strongholds like Georgia and Utah. Thirteen more are mulling similar legislation. Research on a drug derived from CBD is underway, but for now most doctors consider the substance's success anecdotal.

But the plant’s illegal status under federal law creates significant barriers. Families can’t cross state lines with the oil in their possession. And it can’t be shipped between states, meaning all the cannabis consumed in one state must also be grown and produced there.

Moreover, each state law is written differently. In Utah, in-state cultivation is prohibited, forcing families who want to treat their children with cannabis to procure it at their own risk. New York, which passed one of the nation's strictest medical marijuana laws last year, won’t provide it to patients until after a grace period.

“Until the federal law passes, state laws don’t allow you to do much of anything,” Figi said. “They’re too limiting.”

Children are dying in the meantime. Wisconsin resident Sally Schaeffer lost her 8-year-old daughter, Lydia, to a seizure in her sleep on Mother’s Day last year, one month after her state adopted its own CBD law. The Wisconsin legislation, which Schaeffer lobbied for and which Gov. Scott Walker named Lydia’s Law in her honor, contains an amendment that prohibits children from using the cannabis oil outside of a clinical trial. No hospital has yet signed on to conduct any trials.

On Wednesday, the Drug Policy Alliance released a video that tells the story of 7-year-old Ohio resident Sophia Nazzarine, whose parents are desperate to treat her seizure condition with medical cannabis, but are prohibited from doing so in their state.

Figi said her goal is to have the Charlotte's Web Medical Access Act signed into law by July. Some conservative lawmakers, including Perry and Rep. Paul Ryan (R-Wis.), who oppose other forms of medical marijuana, have already voiced their support. Figi said the coalition will spend the next few months lobbying other Republican leaders.

“We don’t have a full year or two years to go through all the committees -- we’re making calls every day,” Figi said. “A mistake has been made and we’re trying to fix it. With enough eyes and ears on this issue we can fix it.”

Maggie, 20 months old
Nichole Montanez
Maggie has been suffering from seizures since she was six weeks old, and has hundreds of seizures on any given day. Her family relocated from Tennessee to Colorado late last year to use a combination of intensive therapy and cannabis oil to treat her symptoms.
Hunter, 7 years old
Nichole Montanez
Hunter suffers from intractable epilepsy and developmental delay. He's been on numerous medications that have failed to alleviate his seizures and he continues to decline "cognitively, physically and emotionally," according to his mother. He recently started cannabis treatments in the hopes that cannabidiol can provide relief.
Piper, 2 years old
Nichole Montanez
Piper was born with a rare genetic disorder that causes her to suffer from seizures and has rendered her non-verbal, unable to crawl or walk and visually impaired. She has been on nine medications to try to treat her symptoms, and started taking cannabis oil last October. Since she began taking a low dose of cannabis, her family has begun to see small improvements.
Calvin, 14 years old
Nichole Montanez
Calvin has an extreme form of autism that has rendered him nonverbal. After 22 days of taking cannabis, he has begun using words to communicate. According to his mother, he used to have up to 20 head-beating episodes per day, and has only had one episode total in the three weeks he's been using cannabis. "I cried everyday for the first week of him using cannabis," his mother wrote on Montanez's blog. "We no longer had to pull over and restrain him on our way to therapy."
Sydni, 9 years old
Nichole Montanez
Sydni suffers from Doose syndrome, which causes her to have up to thousands of seizures each day. She functions at the academic level of a three-year-old and takes nine different medications. Her family recently started her on cannabis oil in the hopes that it will reduce her seizures.
Emily, 4 years old
Nichole Montanez
Emily suffers from a debilitating form of epilepsy that has yet to be diagnosed. Her family recently moved from Indiana to Colorado in the hopes that a cannabis prescription will help ease her seizures.
Jordan, 18 years old
Nichole Montanez
Jordan was diagnosed with Dravet syndrome when she was six months old and has suffered from seizures for her entire life. On her worst days, she's unable to eat, drink or function. Her family recently relocated from Cleveland to Colorado to try cannabis treatments.
Tyler, 11 years old
Nichole Montanez
Tyler has a rare, drug-resistant form of epilepsy called Lennox-Gastaut Syndrome. He has spent months living in the hospital and has been placed in two medically induced comas. He began taking a low dose of cannabis in October and his family has begun to see "small victories."
Kennedee, 2 years old
Nichole Montanez
Kennedee was born with Walker-Warburg Syndrome, a severe and rare form of muscular dystrophy that claimed her older sister's life when she was just two months old. When Kennedee was born, she was only given a few months to live. Since starting her cannabis treatment, "we have seen a personality we didn't know she had," her mother wrote on Montanez's blog.
Charlie, 6 years old
Nichole Montanez
Charlie suffers from Dravet Syndrome and has seizures in the middle of the night, every night. His family hopes his use of cannabis oil will make him able to communicate and reduce his dependence on other drugs.
Cora, 6 years old
Nichole Montanez
Cora was born with a rare multiple-malformation syndrome that causes her to have body and head overgrowth and various abnormalities of her brain, limbs and vascular system. She also suffers from dozens of seizures a day, has undergone multiple surgeries and uses a head switch to communicate. Her parents are beginning to explore cannabis treatments as a means for relief.
KC, 9 years old
Nichole Montanez
KC has suffered from multiple daily seizures since he was three years old and has yet to respond to any treatments. After two weeks using cannabis, he began exhibiting progress. "A boy who would previously wobble and stumble as he walked was now running up hiking trails and jumping into his dad's arms," his mother wrote on Montanez's blog. "He has even been cracking jokes!"
Charlotte, 7 years old
Nichole Montanez
Charlotte used to suffer from more than 40 seizures per day, and now, according to her mother, "her wheelchair and seizure helmet are in storage collecting dust." Charlotte was the first child in Colorado to be treated with cannabis oil, and her story inspired the name "Charlotte's Web," which is the high-cannabidiol, low-THC strain used to treat other children with similar conditions.
Zaki, 10 years old
Nichole Montanez
Since he was just a few months old, Zaki suffered from up to thousands of seizures per day. He has been seizure-free since he started taking cannabis oil more than a year ago.