From that peak of over 10 million, the Drug Enforcement Administration said the number of marijuana plants eradicated dropped to 6,735,511 in 2011 and 3,933,950 in 2012, just a fraction of the 9 million marijuana plants the DEA had hoped to destroy.

DEA officials attribute the decline in part to the state of California, declaring in the agency's 2014 budget proposal that California's financial constraints resulted in "the decreased availability of local law enforcement personnel to assist in eradication efforts."

The DEA also stated that drug trafficking organizations are moving their operations from public lands to private agricultural grow areas and that those who do still grow on public lands locate in "vast mountainous regions, which are more difficult for law enforcement to detect and reach." 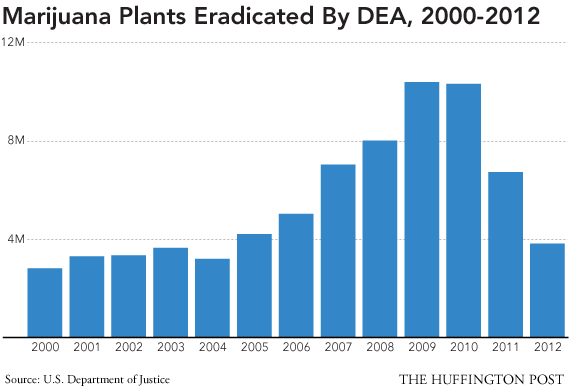 Some of the agricultural marijuana grow sites have "operated under the guise of its state's medicinal marijuana laws," the DEA stated. Plants cultivated on agricultural grows are "super-sized and more robust" and can produce larger quantities of marijuana, according to the DEA.

The DEA budget request also opined that the legalization of marijuana "would increase accessibility and encourage promotion and acceptance of drug use," and said that federal prosecutors "continue a letter writing campaign to encourage property owners to voluntarily close dispensaries/grows." A DEA spokeswoman referred questions to the Justice Department.

Separately, marijuana seizures have also decreased along the nation's borders. The U.S. Border Patrol said in its budget report that cannabis captures were down 9 percent from 2011 to 2012, to 2,999,000 pounds. That decrease came even as the Border Patrol apprehended 7 percent more people illegally attempting to cross the border.

The Justice Department is currently debating how to handle the legalization of marijuana in Colorado and Washington. Attorney General Eric Holder has met with officials from both states, but has not yet indicated whether the federal government will challenge the state laws in court.

Advocates hope that legalization in the states, along with rapidly shifting attitudes toward marijuana use among the public at large, could filter up to the federal level.

At least one group opposed to the war on drugs cheered the new numbers.

"When the DEA cites the 'decreased availability of local law enforcement personnel to assist in eradication efforts' as a reason it's having a hard time enforcing marijuana prohibition, it validates the state-by-state strategy" put into place by drug policy reform advocates, Tom Angell, chairman of Marijuana Majority, said in an email.

"Just as states repealing their own bans on alcohol made it increasingly difficult for the federal government to enforce Prohibition in the 1930s to the point that national ban was soon repealed, each new law that removes local police from the marijuana enforcement equation hastens the day that Congress is going to have to catch up with the majority of voters that polls show support legalization."

This post has been updated with comment from Marijuana Majority and with U.S. Border Patrol statistics about marijuana seizures.

Marijuana Eradication By Law Enforcement Plummets Over 60 Percent
Legal Marijuana Across The U.S.