A Colorado entrepreneur is pushing to make buying marijuana nearly as easy as shopping for heirloom tomatoes.

Justin Hartfield, the CEO of a Denver-based website that maps and collects reviews on marijuana dispensaries, is currently shepherding an initiative that would allow “organic cannabis farmers markets” in the city of Boulder.

Colorado legalized recreational weed in 2012, and regulators at the state level are working out the rules that brick-and-mortar recreational pot shops will have to follow when they open their doors next year. Hartfield wants local officials in Boulder to push even further, allowing the creation of markets like the ones now used to haggle over white asparagus and organic lavender.

“I got news for you: Marijuana is legal in Colorado,” Hartfield, a longtime marijuana activist, said. “It’s no longer a drug in a sense. It’s a plant. It’s a commodity. There’s no reason not to allow trade in it openly.”

Marijuana remains illegal under federal law, but federal authorities have mostly allowed medical marijuana dispensaries to exist in states where the drug has been legalized for that purpose. Now that Colorado and Washington have legalized the drug for recreational use, how federal authorities will respond is unclear.

Hartfield admits his idea -- first reported on by Boulder’s Daily Camera newspaper -- is likely to be “controversial,” but says it’s nothing more than a logical extension of the movement to make pot legal. His proposal envisions plots within agricultural areas in Boulder set up as secure spaces where cannabis growers would “showcase their products, introduce their customers to the growing operation, demonstrate their practices, and host community-oriented events that provide marketing opportunities.” From 26 to 99 vendors would be allowed. 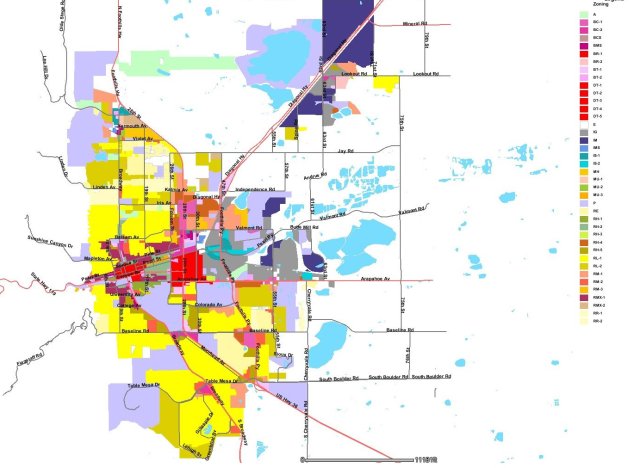 Hartfield wants weed farmers markets to be legal in zoned agricultural areas in the city, shown in light green in the map above.

“It really is very similar to any other organic market,” Hartfield said. “The only difference is this plant has certain peculiarities that, say, a tomato doesn’t. Boulder has a rich history of organic markets, and Boulder is also a city in a state where cannabis is legal. It just makes sense.”

Several county and city officials interviewed by The Huffington Post weren’t so sure the plan would make sense under local regulations, but said they would be open to set the plan in motion if that happened to be the will of Boulder’s citizens. Mike Bunuelos, a spokesman for the City of Boulder, explained current regulations don’t allow anything but produce grown at an outdoor farm to be sold on agricultural land. That would make it illegal to set up ganja stalls in farm areas, since Colorado state regulations currently only allow for weed to be grown indoors.

“What they’re proposing is to sell a product in an agricultural zone, and under our current regulations that’s not allowed,” Bunuelos said. “We would have to change the current zoning legislation, and that would have to be a political process involving the City Council.”

Dale Case, director of the Boulder County Land Use Department, was more succinct: “The elected officials are the ones that would direct us to do something like this.”

Both municipal officials also noted that state regulations regarding retail sales of marijuana, which would supersede local rules in most instances, are still being hammered out.

That fact does not necessarily dissuade Hartfield, who is using the push for marijuana farmers’ markets to drive attention to one of his business ventures, a startup website called SimpleGov.com. The site, which promises people the ability to funnel all kinds of requests directly to city officials in their town, is hosting the Boulder petition.

Following a blast email to 300,000 people across the United States earlier this week, Hartfield’s plan for an outdoor kush bazaar had garnered 66 supporters on the site early Friday.

Hartfield said he’s aiming to start by getting local officials to simply comment on his plan.

In regards to regulations for marijuana sales, local officials in Colorado are “kind of punting, passing the buck on marijuana," he said.

"The [state marijuana legalization] laws are brand new, and haven’t been fully enacted yet," he said. "They’re waiting to see what it looks like, and we realize they really want to get it right. But we're pushing them to act on it."

“Right now, we’ll consider any response from the officials as a success -- good, bad, or indifferent,” Hartfield said.

Marijuana Farmers Markets Proposed In Boulder
16 Facts About Marijuana And The U.S. Economy