PORTLAND, Ore. -- Oregon ended marijuana prohibition at midnight Wednesday, joining Colorado, Washington state, Alaska and the District of Columbia in legalizing recreational use of the drug.

The new law means Oregon likely will reap benefits that appear to have followed legalization elsewhere: Reduced crime, from a legal industry supplanting a black market; higher tax revenue, once weed is legal to sell; and police forces and courts unburdened by droves of misdemeanor pot offenders.

Oregon voters in November approved Measure 91 with 56 percent of the vote. Starting Wednesday, adults 21 and older can legally possess up to eight ounces of marijuana inside their home and up to one ounce outside. Adults can grow up to four plants per household, out of public view.

WHAT THAT MEANS FOR YOU

You can get high -- as long as you're not in a public space. The short video below details the basic rules for those toking up in Oregon, and The Oregonian has compiled a solid list of answers to frequently asked questions.

Oregon lawmakers said Tuesday they were excited to reap legal weed's rewards. Anthony Johnson, who co-wrote the law, said legalization means weed will be treated like beer and wine. It's a victory for casual users, who previously would have been labeled criminals.

"It supports people who want to succeed in society," Johnson said at a press conference. "There’s no reason we should saddle people with crimes on their record that prevent them from having good educational and employment opportunities."

Before legalization, 7 percent of all arrests in Oregon were for simple marijuana possession, according to The Oregonian. The ACLU reports that people of color were more than twice as likely to be cited for marijuana than white people. The enforcement issue will change dramatically, predicted U.S. Rep. Earl Blumenauer (D-Ore.).

"We’re turning a page," Blumenauer said Tuesday. "We are suffering, and have for years, with unequal application of justice ... [We’re now] able to focus on our attention of enforcement on people who would put it in the hands of our children, and away from criminalizing behavior that most people think should be legal for adults."

For now, it's not legal to buy or sell marijuana -- though local organizations are circumventing that by giving weed away. The Oregon Liquor Control Commission has said it won't be ready to dole out licenses to sell until late next year.

Legislation that still needs House and Senate approval would allow medical marijuana dispensaries to sell weed to the public as early as Oct. 1, The Oregonian reports. That bill will make pot easy to obtain for adults, considering there are 269 medical marijuana dispensaries in Oregon -- more than there are McDonald's or Starbucks locations in the state, Vocativ reports.

Full marijuana legalization has a long road ahead. Twenty-three states have decriminalized marijuana in some form, though it remains banned by the federal government.

State forecasts have suggested that Colorado and Washington could generate more than $800 million in combined revenue before 2020 thanks to marijuana sales, HuffPost's Matt Ferner has reported. 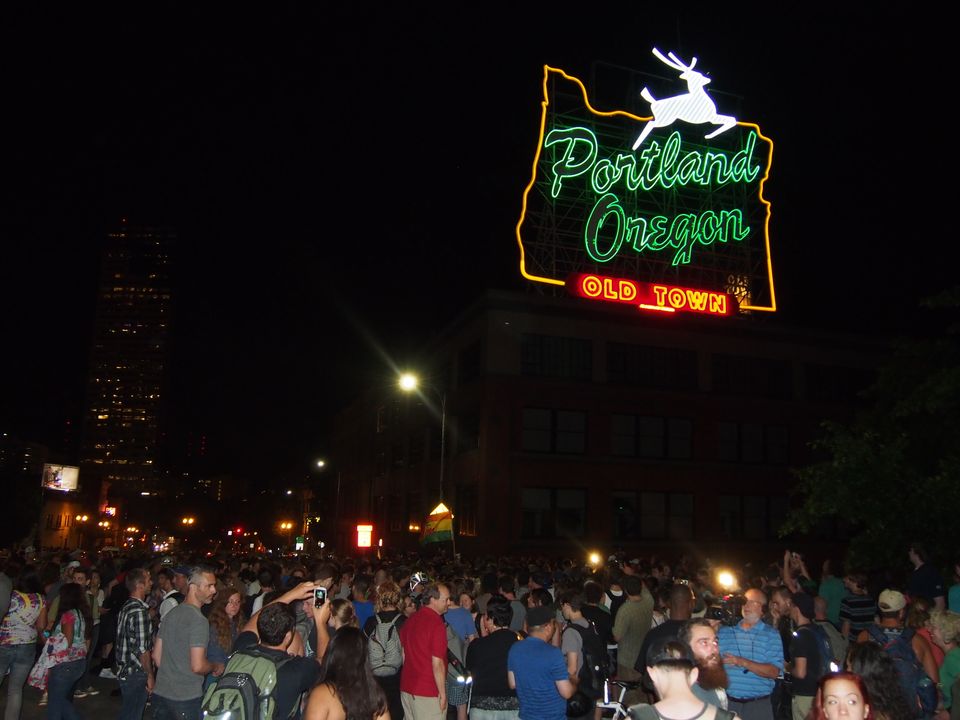 1 / 18
Thousands flocked to Burnside Bridge in Portland at the stroke of midnight July 1 to celebrate the end of marijuana prohibition in Oregon. Weed isn't yet legal to sell -- so NORML and partygoers gave it away.
Andy Campbell / The Huffington Post