Support for marijuana legalization is slowly rising, like the cloud of smoke you'll see above Ann Arbor's 4/20 rally Wednesday.

Data compiled by the Pew Research Center and drawn primarily from the General Social Survey has found a consistent trend towards supporting legalization of marijuana for recreational use, but no poll so far has shown a majority in favor. 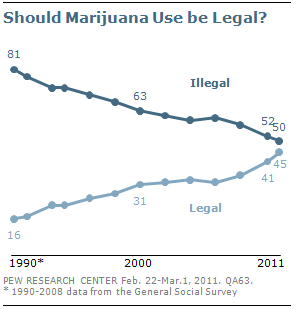 In a poll released Tuesday by CNN, 41 percent of American adults said they favored legalizing marijuana, while 56 percent opposed. Another poll, conducted early last month by the Pew Research Center, found 45 percent of adults supporting legalization and 50 percent against it.

Demographic trends show that the movement to embrace legalization will likely continue: Both recent polls reveal younger respondents as the most likely supporters. In the Pew poll, the majority of 18-29 year olds (54 percent favor/42 percent oppose) and a slim plurality of 30-49 year olds (49 percent support/47 percent oppose) said marijuana use should be legal. In the new CNN poll, about as many respondents under 50 said they supported legalizing marijuana (49 percent) as opposed it (50 percent).

Should surveys begin to show majority support for legalization, however, recent evidence from California suggests anti-marijuana campaigns can still have a big impact on public opinion. Proposition 19, a measure on last year's ballot that would have legalized recreational marijuana use in the state, ultimately failed 53.5 percent to 46.5 percent. All four pollsters conducting multiple surveys during campaign season found a drop in support for the bill over time. Three of the four polls initially revealed a higher level of support than opposition, but all four final polls showed opposition exceeding support.

The CNN poll found independents more likely to back legalization than either Republicans or Democrats, although none of the partisan groups showed majority support. In the Pew survey from last month, Democrats were most likely to favor legalization, along with a plurality of independents.

Both the CNN and Pew surveys found those who have attended college much more likely to support legalization than those who have not. According to CNN's research, those who attended college opposed legalization by a five percentage point margin, while those who did not opposed it by 27 percentage points. The Pew poll, which broke responses down further, similarly found that college graduates and those with some college education were much more likely to support legalization than those with a high school education or less.

In the CNN poll, non-whites were less likely to support legalizing marijuana than whites, even though, as the Human Rights Watch has reported, blacks will more likely be arrested for drug possession than whites (the CNN poll did not break down the "non-white" category further because the sample sizes would be too small).

Higher-income individuals were amore likely to support legalization than those with lower incomes, CNN also found.

The polls did not take into account legalization of medical marijuana, which typically yields higher levels of support.

Unless current trends reverse themselves, future 4/20 rallies could see majority support within a matter of years. Whether that support will remain after opponents attempt to sway public opinion as they did in California remains to be seen.