BELFAIR, Wash. -- Other than a skunky aroma, the waiting room at the Cannabis Care Foundation in Belfair, Wash., resembles your typical pharmacy. Chairs line walls next to stacks of magazines -- in this case, issues of Rolling Stone -- and a steady stream of patients step up to the counter with doctor's notes.

One by one, salesman Adam Dempsey leads them to the back of the shop, where they can choose from an extensive weed menu -- products with names such as Frankenstein, Garbage, Snoops Dream and Sour Diesel. 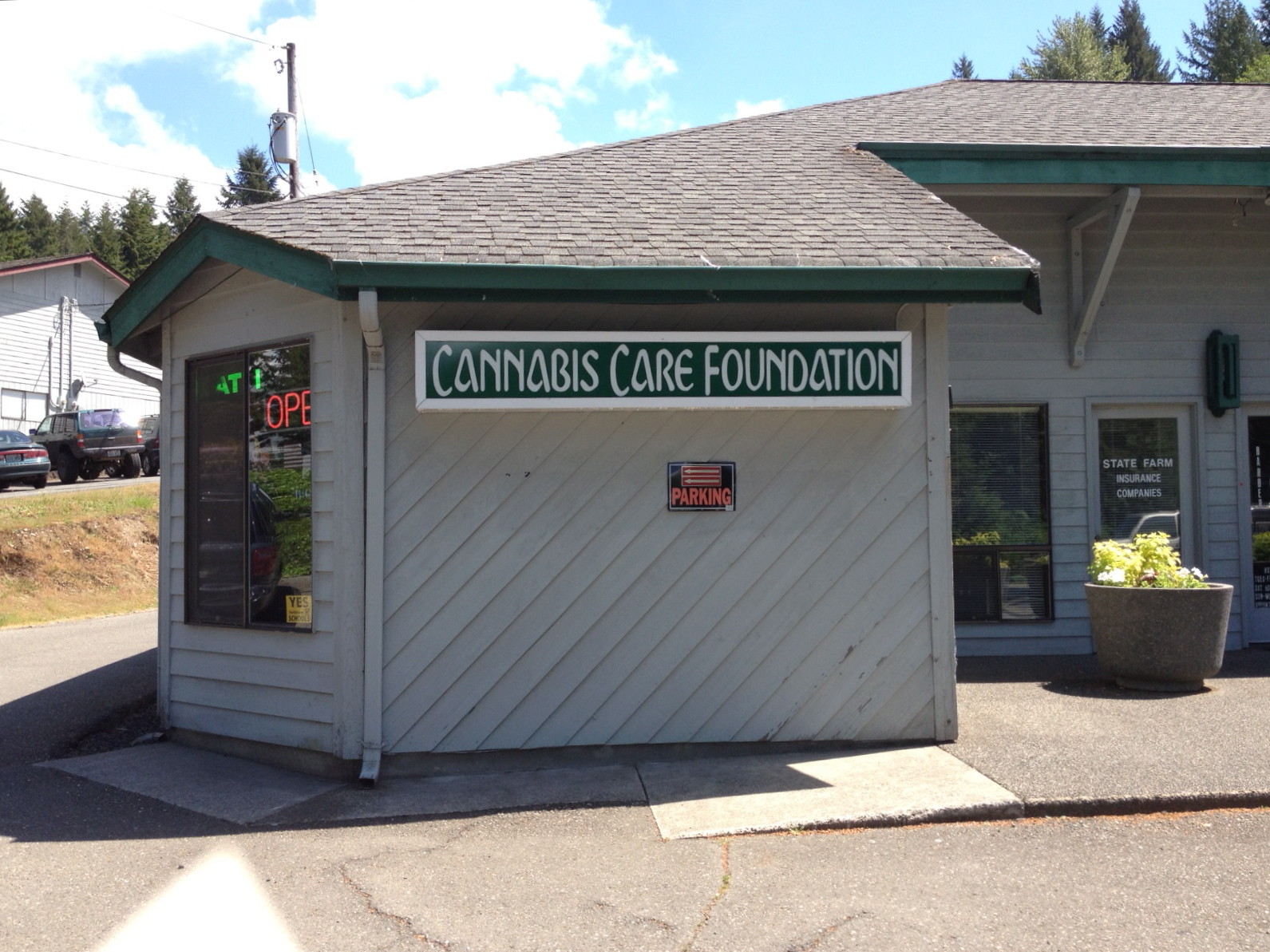 A medical marijuana dispensary outside of Seattle sells an array of cannabis products, generally grown by co-op members. (Lynne Peeples)

"I take it every day myself," said Dempsey, sporting a black hat with a green embroidered marijuana leaf and a plain white T-shirt over his tattooed arms. He works security and customer service at the non-profit store, which through a cooperative arrangement gets much of its cannabis crop from patients themselves.

But experts warn that unwelcome chemicals, including pesticides, may be tagging along with the THC and threatening the health of marijuana users.

"There are no application standards," he added. "Since we're not telling growers that they're allowed to use anything, they often use whatever they can get their hands on. And that's a lot of bad things."

Many of the chemicals applied to pot plants are intended only for lawns and other non-edibles. Medical cannabis samples collected in Los Angeles have been found to contain pesticide residues at levels 1600 times the legal digestible amount.

Because the product is generally inhaled rather than eaten, any toxins it carries have an even more direct route into the lungs and blood stream. Raber noted the situation is all the more concerning for patients smoking medical cannabis, whose health problems could make them more vulnerable to the risks pesticide exposure brings -- especially if they suffer from a liver disease.

Still illegal in the eyes of the federal government, marijuana use is condoned by a growing number of states. Eighteen states and the District of Columbia now allow the medical use of cannabis, and Colorado and Washington recently approved pot for recreational use. Many of the states where some form of marijuana use is legal, including Washington, have begun drafting regulations that would require independent labs to test products before they are sold.

While efforts to legalize both medical and recreational cannabis could lead to "a greater awareness of and demand for clean, pesticide-free marijuana," said Raber, the burgeoning market remains troublesome.

Raber published a study this month that attempted to answer some lingering questions about pot and pesticide exposure. He and his colleagues investigated pesticides they'd commonly detected on marijuana products in their lab -- bifenthrin, diazinon, and permethrin -- as well as a plant growth regulator called paclobutrazol. One concern was whether those pesticides could actually get into a user's body.

The short answer: yes. However, amounts varied depending on how the pot was smoked.

The researchers determined that as much as 60.3 percent to 69.5 percent of chemical residues would be inhaled with a hand-held glass pipe, but as little as 0.08 percent to 10.9 percent got through with a filtered water pipe.

"When you filter, you see a dramatic reduction in the amount of pesticides," said Raber.

Not all cannabis is the same, of course. Each strain comes with its own unique combination of chemical compounds, and scientists have yet to get a handle on how any of the chemicals applied to the plant might interact with those natural chemicals, especially when burned and inhaled together. Then there are all of the other forms in which cannabis is consumed -- from oils to teas to candies.

"This raises a lot of questions on how to set up better structures to provide clean, regulated supplies," Raber said.

Public health experts interviewed by The Huffington Post lamented the dearth of data on the subject. Some research has been done on pesticides and smoking tobacco, but since tobacco is not a food crop, the U.S. Environmental Protection Agency has not set tolerances on pesticide residue levels.

Tobacco is also generally smoked through filtered cigarettes, and for the most part not targeted for use by already unhealthy adults, as medical marijuana is.

"If the pesticide is inhaled, then this is quite worrisome," said Dr. Beate Ritz, an environmental health epidemiologist at the University of California, Los Angeles School of Pubic Health. "And these patients might be much more vulnerable."

"Pesticides affect the nervous systems of insects. Our nervous systems are similar to theirs," added Ritz, noting that for patients with terminal illnesses, the benefits of smoking marijuana might outweigh long-term risks of pesticide exposure, such as cancer and heart disease. But acute risks such as flu-like illnesses and respiratory problems, she said, would still be a serious concern.

Given all this, it seems reasonable to ask whether pesticides are even necessary to grow marijuana plants. The answer depends on whom you ask.

James Dill, a pest management specialist with the University of Maine's Cooperative Extension, explained that pests create difficulties in managing the crop. Too much moisture and growers face a fungus or mildew problem; too much dryness and spider mites can take over.

"All of the sudden you could be smoking a mold," said Dill. "That's not meant to be ingested."

It can be easy to see why growers motivated to fend off these foes, and by constraints on time and space to grow plants faster and taller, might resort to chemical help.

There are some alternatives.

"If they're smart, they use companion planting like garlic and onion chives to provide a natural barrier," said Dempsey, the Washington marijuana dispensary salesman.

Still, he admitted that his suppliers, many of whom are also his customers, are still just "learning how to grow."

The Cannabis Care Foundation doesn't have any special testing equipment, nor does it send marijuana out to a lab for analysis. But Dempsey suggested that he and his coworkers can "tell pesticides right away" by smell, taste, touch or by using a microscope. He added that they reject a good amount of cannabis due to mold, pests or pesticide contamination.

But Raber expressed doubt that such surface-level analysis would be sufficient.

"There is no way they could detect pesticide molecules inside of the plant that were put there through the roots," he said. "Nor could they smell the tens to hundreds of compounds you'd like to look for that could potentially be put on there by a cultivator."

Pesticides can be dangerous even at levels far lower than someone would be able to see with a microscope, he added. But he also emphasized that most dispensaries and cultivators want to provide a clean, safe product. In many cases, both seller and grower are unaware that a crop has become contaminated.

"Cannabis is well known to pull up a lot of crap out of the ground," he said.

Evan Mascagni stumbled across the issue of contaminated cannabis while filming his upcoming documentary, "Toxic Profits," which highlights the global sale of pesticides banned in the U.S. He noted concern among many in California that because marijuana remains illegal under federal law, the U.S. Department of Agriculture doesn't allow any organic certification for its products.

Some independent efforts such as Clean Green Certified have sprouted, but even crops from growers who think they are complying with organic standards sometimes test positive for pesticides.

"You can only imagine the pesticides that are being used on marijuana grown elsewhere by profit-driven farmers" who may not care about the health of consumers or the environment, Mascagni told HuffPost in an email.

Pot-smokers aren't the only ones at risk from the application of pesticides on marijuana crops. Also potentially in danger are the people spraying the chemicals -- especially if the practice takes place indoors -- and others that may eat, drink or breathe downwind.

Dempsey maintained that growers can produce cannabis without using pesticides.