Marijuana, already legal in two states and on the verge of legitimacy in others, may become a product that can easily be purchased via vending machine.

A Phoenix-based company behind the pot machines, Endexx Corp., envisions a transaction unfolding like this: A woman in Colorado, where recreational pot is legal, uses an app on her iPhone to purchase an ounce of weed, then goes to pick it up at her favorite retail outlet. There, she encounters the vending machine and uses its touch screen to complete her order, adding a book of rolling papers and a cigarette lighter.

“The way we see it, when you walk into a shop, you don’t need the expert or aficionado to help with selection,” Todd Davis, chief executive officer of Endexx, told The Huffington Post. “The people who are using this in the recreational space -- they know what they want, and they don’t want to hear the whole spiel every time.”

Davis's company recently bought two smaller firms that provide vending machines to medical marijuana outlets. One, Dispense Labs, produces a card-reading gadget used by the staff at pot clubs to dole out measured portions of cannabis, streamlining the buying process. (The machine is pictured below.) The other acquisition, CannCan, engineered a modified soda machine that dispenses plastic cans full of marijuana.

Davis said he hopes to turn those technologies into what, for the time being, still sounds like a hardcore stoner fantasy: a marijuana vending machine. 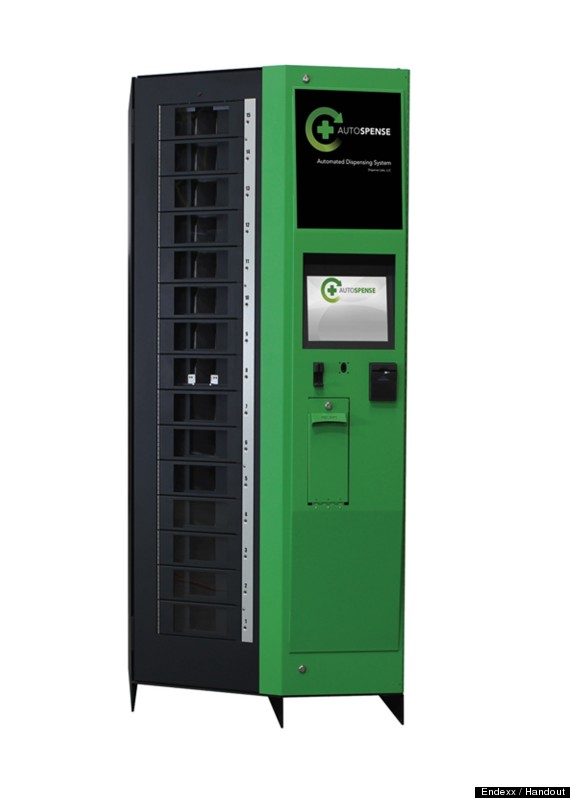 With retail sale of marijuana expected in Colorado by January 2014 –- and shortly thereafter in the state of Washington -- Davis said he believes automated self-service machines ubiquitous in other parts of retail will pop up in weed stores, too. He said he expects his company to be one of perhaps three major players manufacturing those vending machines.

“It’s like a gold rush,” Davis said. “Once significant investment capital comes to the market, who knows?”

Davis already confronts competition. California-based Medbox Inc. is currently the industry leader in the decidedly small niche of providing machine dispensing systems to medical marijuana dispensaries. For $50,000, a pot shop can buy two state-of-the-art automated dispensing machines from Medbox –- one for marijuana, one for cannabis edibles like cookies and brownies -– as well as a customized software system that keeps track of inventory, sales and patient information. The company had sales of $1.75 million last quarter. Its machines are pictured below. 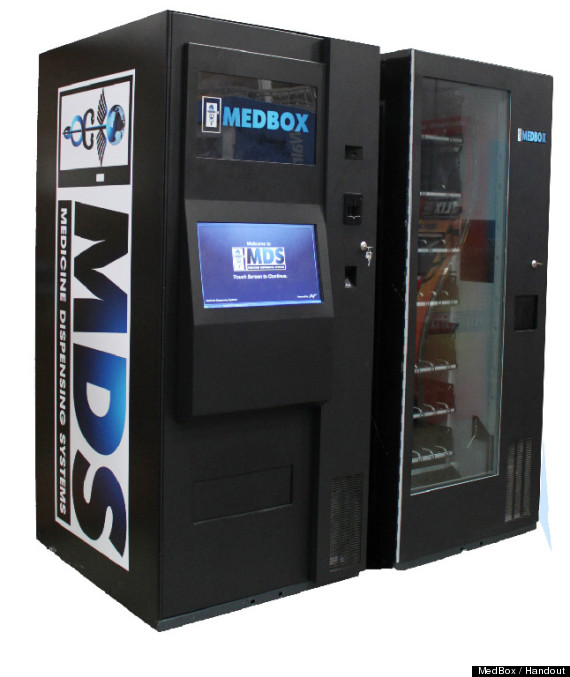 In the fledgling legitimate marijuana trade, Medbox’s CEO, Bruce Bedrick is sometimes referred to as “the Steve Jobs of medical marijuana dispensing,” a nod to his strategic acumen and supposedly flashy temper.

Bedrick, a licensed chiropractor, said he doubts Colorado or other states will immediately allow automated self-service vending in a way that customers will find attractive. Regulations in that state are still being finalized.

“I think that’s still a couple of years down the road,” he said

In the meantime, Bedrick said his company will focus on supplying vending machines for medical dispensaries, as well as adapting the technology for selling conventional medication in pharmacies.

“Some people want to see this free-flowing marijuana,” Bedrick said, “They want to go from federal and state ban to marijuana for everybody. We don’t believe that can happen. In order to gain respect and trust, it’s better to go through gradual, medical adoption.”

A third company, Tranzbyte Corp., announced in April that it planned to begin distributing a marijuana vending machine secured with radio-frequency identification tags to dispensaries. Tranzbyte did not respond to repeated requests for comment from The Huffington Post.

David Levine has been a vending machine industry consultant for close to a decade. Earlier this year, he sold his own company, CannCan, to Endexx. In recent years, he has visited medical marijuana trade shows to explore sales of his own vending machine -- basically a modified soda machine. He had figured it would take a long time for such equipment to find a market. But the moment is at hand, he said, as a former outlaw industry is flooded with sober-eyed professionals seeking to cash in.

“Back in 2009, you’d go to these conventions and you’d see people trying to unload 80 pounds of weed,” Levine said “Now, you’ll see people buttoned up and trying to figure out solutions for what’s a real industry.”