Sometimes someone comes along and captures the public's imagination. Some personalities have that special magic. Some movie moments are edged in your mind forever. You remember the scene even when you close your eyes.

So it is with the late blonde actress Marilyn Monroe, who is larger in her death than she was in life. I guess for some, she is the ultimate American woman. The sexpot. She was the sex kitten -- blonde, sexy, giddy, beautiful, with a soft sultry voice, and playful.

In reality her love life was a wreck.

She was married to the legendary baseball player Joe DiMaggio and the intellectual author/playwright Arthur Miller. And of course there are the rumored relationships with President John Kennedy and his brother, Robert, which might have stimulated her suicide at the age of 36.

Was the lady a tramp? 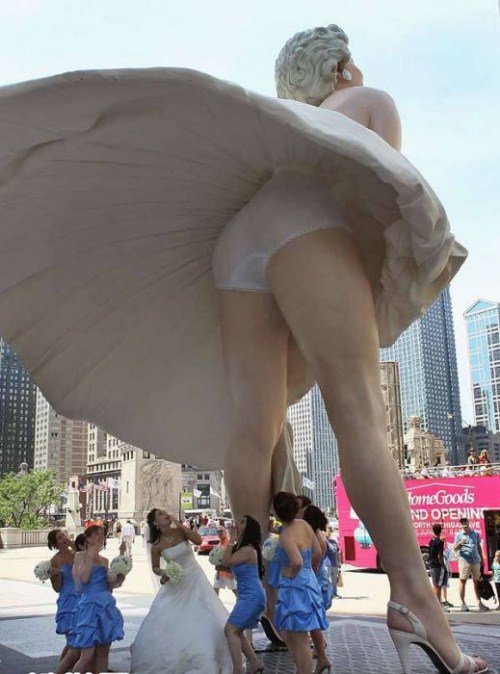 And now right here in Chicago, on our most famous street, we have erected a 26-foot tall statue of Marilyn Monroe with her dress blowing in the wind, an iconic scene from the movie, "The Seven Year Itch."

The sculpture stands in Pioneer Court right at the Michigan Avenue Bridge, near the point where John Point Baptiste DuSable, the Haitian, landed in Chicago.

The famous white dress worn in the movie was recently auctioned for $5.6 million. The auctioned dress cost more than the making of the movie. Can you imagine?

The statue, "Forever Marilyn," is by the artist Seward Johnson, famous for his reality sculptures in public places. In these thin economic times, I wonder how much the statue cost, even if it is solely supported by private funds.

It remains in place on Michigan Avenue until the spring of 2012. Marilyn would be appropriate in Los Angeles and on the strip in Las Vegas, but sorry, she doesn't fit in Chicago, the city of broad shoulders.

What does the sculpture of Marilyn say about us? What does it say about women? Is this our role model? Is this the female aspiration? What happened to taste and dignity ? What is the "Marilyn message"? Is the skirt blowing in the wind representative of Chicago the windy city?

Is the Marilyn sculpture sexist? We stand under it, taking photos of her legs. We stand under her, looking up at lacy panties. The kids ride the skateboard over the base of the sculpture. Four policemen are on guard. The three-story statue attracts much attention. Is it real? Is it hideous? Is it beautiful? The answer is in the eye of the beholder.

The message is strong and it suggests, in these cut-back times, when the feds wrestle with paying Social Security and soldiers' checks, that Marilyn should not be on display. Chicago just fired 1,000 teachers; 650 city workers just got pink slips; the fireworks were cancelled at Taste on Independence Day; and other cost savings measures have been put in place. And rightfully so. In that vein, Marilyn seems excessive.

Should she be there? Should we vote on public art? Should good taste, good sense, and good timing prevail? Did the political forces approve?

I could think of more appropriate people who might provide better representation on Michigan Avenue. Consider, Frank Sinatra, Irv Kupicient, Mayor Daley, Walter Payton, Michael Jordan, Muhammad Ali, Eleanor Roosevelt, Margaret Burroughs, Mike Royko, Colonel McCormick, Abraham Lincoln. There are a host of others who deserve the prominence, but I am not feeling Marilyn in Chicago on the Magnificent Mile.

Ladies, voice your opinion. The statue, like it or not, represents you. Should we protest in our panties, with flying skirts?

What do you think of Marilyn on Michigan Avenue?