Marilyn Monroe's influence on real estate goes beyond the grave -- or the crypt rather. The Brentwood house that she died in 50 years ago on August 5 became a hot property literally overnight.

On the day after she died, it is said her estate received a half-dozen offers to purchase the home. At the time of her death -- ruled an accidental drug overdose (one expert ruled out Monroe committing suicide) -- she had owned the 2,600-square-foot Spanish hacienda for about six months, having paid about $90,000. She carried a loan on it and punched the mortgage clock to the tune of $320 a month. Despite a somewhat unclear ownership paper trail, we know that the last time the house changed hands was in 2010, when the purchase price was in the vicinity of $3.5 million. (The photos below were taken at that time.)

The one-story white stucco house was built in 1929. When Marilyn Monroe bought it, it had three bedrooms and two baths plus a detached guest house. The legendary actress used one bedroom for herself, installed her housekeeper-companion Eunice Murray in a second bedroom and the third bedroom was used as a "telephone room," according to various reports. There was, and still is, a kidney-shaped swimming pool in the backyard that Monroe reportedly never used.

Reports say that Monroe threw herself into making her house a home. Shortly before her death, she traveled to Mexico to buy authentic furnishings and art work -- some of which were found still in their shipping boxes when they found her body. The last check she ever wrote was for a white chest of drawers.

She even had an herb garden planted on the gated property that sits at the end of a cul-de-sac. Much has been made of the fact that she installed a plaque on the house with the Latin phrase "Cursum Perficio" translating to "My Journey Ends Here."

To see pictures of Marilyn Monroe's last home, check out the gallery below. 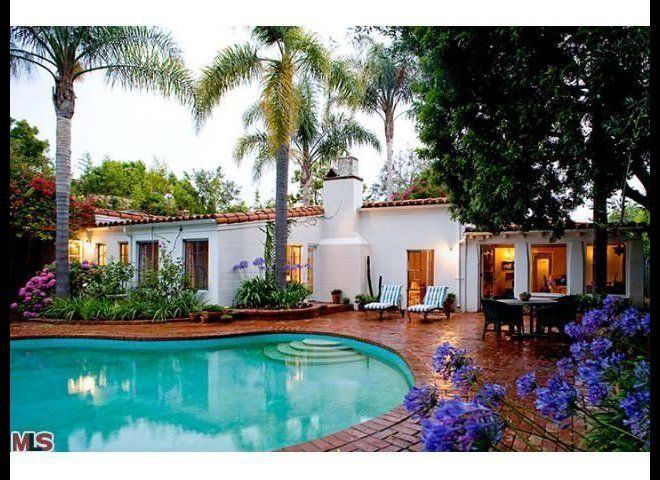