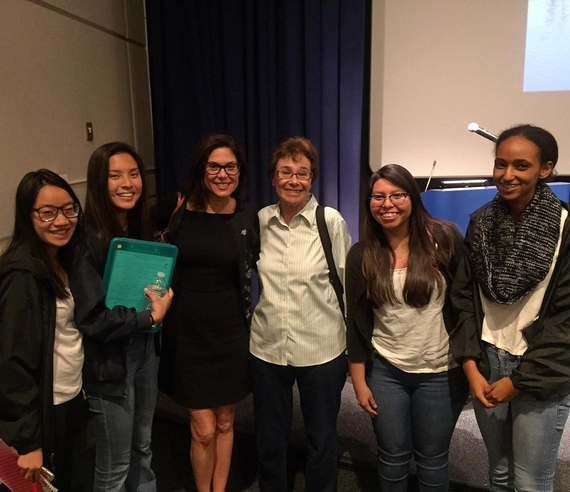 Judith S. Weis in white shirt, surrounded by fans, including this author, at Aquarium of the Pacific Lecture

What if you could get an overview of all the issues threatening our oceans, the trends for each issue, and what can be done to reduce these threats, all in one slim volume ((251 pages, with references)? Well that great gift to humanity has been accomplished thanks to author Judith S. Weis, Professor Emerita of Biological Sciences at Rutgers University and Oxford University Press. Marine Pollution: What Everyone Needs to Know, is a no-nonsense, comprehensive treatment of what humankind is doing to the 71% of the planet that is blue, how that impacts you, and what you can do about it.

I had the great pleasure of hearing Weis present this important material at The Aquarium of the Pacific in Long Beach, California, a showcase of the amazing creatures most directly impacted by marine pollution. Weis' presentation was part of the excellent lecture series curated by the Aquarium to highlight their exhibits and environmental outreach. Aquarium of the Pacific lectures are live-streamed and archived, so check out the series here.

In keeping with the simplicity of Weis' straightforward question and answer style in this book, which you should read in entirety, I have come up with 5 surprising facts that I, who consider myself fairly knowledgeable on ocean issues, learned from this book:

1. Lionfish, those impressive spikey fish that you probably first saw in aquariums and pet stores and are native to the Indo-Pacific, have become a wildly invasive species in the Atlantic along the South East Coast, South American Coast, Gulf of Mexico and Caribbean. What I learned from Weis is that these fish were first spotted out of their territory in the early 1990's off the coast of Florida where they may have been released from personal aquariums (they tend to eat up all the other fish, making them potential outcasts) or have been released in flooding of pet stores etc...during Hurricane Andrew. These fish have a potent venom that deters predators, but cut off the spikes, and they are a delicious meal for humans. (I sampled them in the Bahamas, and can testify that they are quite tasty.) Lionfish are especially dangerous to coral reefs because they eat up the algae eaters like parrot fish who keep the algae level in balance. "Off the coast of North Carolina they are eating so well that, like obese people, they are found to have globs of fatty tissue on their internal organs- not a normal condition for a fish."

2. "Fish on Prozac" is an area of emerging concern. Our neurochemical pharmaceuticals are released from our urine and pass through sewage treatment and into our aquatic environment where they alter the amount of the neurotransmitter serotonin in fish, just as these drugs are formulated to do in humans. While antidepressants work wonders for depressed humans, their impacts on fish are not so good. Beulig and Fowler found that "fish on Prozac" alter their swimming and feeding behaviors, making them easy prey. Weis also discusses the impacts of birth control hormones, antibiotics and personal care products such as sunblock, on aquatic life. Weis discusses new technologies that may be effective in removing these pharmaceuticals from wastewater at treatment plants.

3. Oil spills in open water have actually been decreasing over the past two decades, and tankers built in America now must have double hulls to protect from release if the outer hull is penetrated. A presidential panel set up after the Deepwater Horizon spill had many safety recommendations noted by Weis that our congress did not approve. Since there are plans to increase offshore drilling into deeper waters, future disaster are more likely.

4. One great way to reduce storm water runoff, a major source of ocean pollution, while providing wildlife habitat, insulation and cooler urban air temperatures in summer, is Green Roofs. Switzerland, particularly Basel, has the highest area of green roofing in the world thanks to legislation enacted in the 1990's. A great reason to visit Switzerland apart from Art Basel and the ski slopes!

5. "Dead Zones," where hypoxia (low oxygen) is so severe that nothing but bacteria can survive, have been identified in 150 areas around the world. America has one of the largest in The Gulf of Mexico thanks to the input of agricultural fertilizer-rich wastewater from the Mississippi that flows though our nation's agricultural heartland. Dead zones are also caused by nitrogen deposition from burning fossil fuels. In 2011, with flood conditions carrying large amounts of agricultural runoff, the Gulf Dead Zone was 6,770 square miles, the size of the state of New Jersey! (This is not a New Jersey Joke.)

Learn more surprising facts, possible large scale solutions, and what you can do as a citizen, by reading Marine Pollution, What Everyone Needs to Know. Remember, Knowledge is Power.