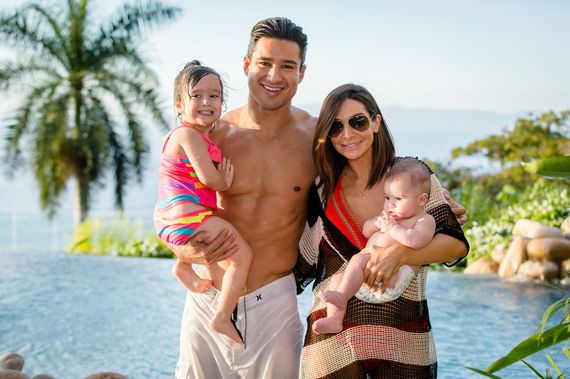 Mario Lopez's Mexican heritage in many ways defines him as a man, and even more particularly as a parent. "Family in the Mexican culture is so important -- the food, the get-togethers, the strictness, and... we spend quality time together," he says. In terms of his parenting style, Lopez isn't afraid to call on traditional or "old-fashioned" values.

TV viewers first became acquainted with Mario Lopez in a big way when he was a kid himself, playing A.C. Slater on Saved by the Bell in 1989. Now Lopez, just having turned 41, is all grown up.

Over the years, Lopez has acted on stage and screen and currently hosts the entertainment news show Extra. He is also a New York Times best-selling author who recently released his latest book, a candid memoir, Just Between Us.

In an equally candid Q&A, Lopez opened up about being a husband, a father of two -- Gia, 4, and Dominic, 1 -- as well as parenting issues including bullying, social media, religion, sexuality, and more.

Each child is unique and will develop in their own time. Pushing children too hard, too fast is not a good thing to do. It's best when children are polite and well-mannered and know the parents are boss. I think there are many things that are considered old-fashioned that still work best with raising kids.

How does the way you were parented affect your parenting?

My parents showed me love -- not just with words but with their actions. The most important thing you can do with a child to show love is to spend time with that child.

My childhood was great. I didn't grow up spoiled, that's for sure. I go into detail about how I grew up and what my neighborhood was like in my book. I will say this, no matter where you were raised, if you fall in with the wrong people, your life can be ruined forever. I lived in a tough town and I'm lucky I found a solid path with the help of my parents.

How has fatherhood changed you?

In so many ways. I have to think about four people now: my two children, my wife, and myself. Before it was just me and then me and Courtney. You drive slower, shop differently, listen more, and I found a deeper love I never even knew I had.

Given your sexual history as a teenager (Lopez lost his virginity at age 12), what lessons do you want to teach your children about sexuality as they get older?

Parents need to talk to their kids ASAP. America is weird that way; they'll show all sorts of violence on TV, but rarely do we ever hear about sex in a real way -- what's really happening out there. It's best to teach them sooner than later about everything. Not so they're afraid, but so that they are aware!

How will you advise your kids on dealing with bullies and mean girls?

When I was a kid there were bullies, obviously, but there wasn't the Internet to really tear a person down. I think I'm in a great place to help my kids deal with it: 1. Because I will teach my children to stand up for themselves, and 2. Because I'm on TV, I get hurtful comments from time to time and I've learned to brush it off. I will teach them how to ignore those people.

As your kids get older, how do you plan on advising them about using social media?

I will teach them that when they coined the phrase, 'less is more' they were talking about social media. Who knows what social media will be like when they're old enough to be allowed to use it. Courtney and I will make a choice then on how to direct them.

How do you maintain the connection and romance with your wife with a 1-year-old and a 4-year-old in the house?

Planning. Lots of planning. Romance is love, and true romantic moments happen when we least expect it. I make sure Courtney has help so she's not too tired and I make plans to put us in places that are just for us, meaning, I don't do corny romantic stuff, I just set up the environment for it to happen.

What values do you want to pass on to your kids?

They will be polite and have a great work ethic. I think there are lots of kids that feel entitled and my kids won't be like that.

Will Catholicism play a big role in raising your children?

Of course. I want my kids to have faith and believe in something that can give them peace of mind. When they get old enough they can make their own choices.

You're candid in your memoir. What did it feel like opening up in Just Between Us?

It was mind-blowing. If you sit down right now and start recanting all the stories in your life to a close friend, you will find yourself laughing, crying, ashamed, and sentimental. I went through so many emotions. You'll see when you read it. I'm different than what I think most people would expect.

I wish everyone would stop for a few moments and think about their own memoir; maybe they would laugh a bit more, love deeper, think before they act, and realize how quickly life passes. There is no time to hold grudges or fuss and fight about stupid things. Just keep moving on and let the bad stuff go already.