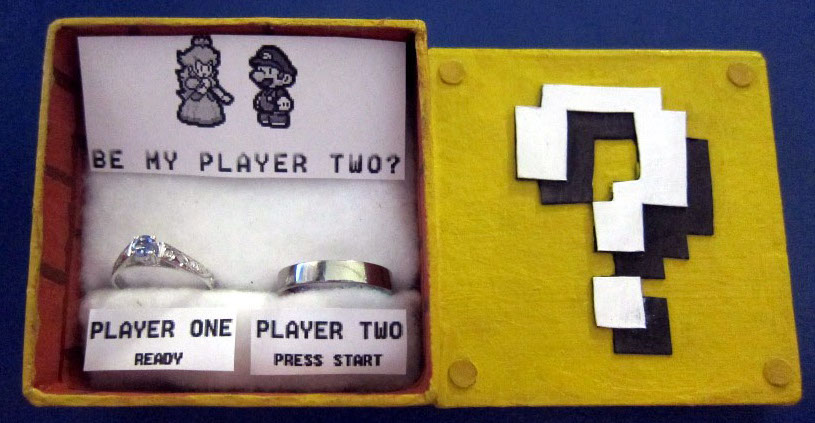 Dimmie Flay, 26, from Darwin, Australia, proposed to her boyfriend of six years, Matthew Danielewski, 28, with a Mario-themed box on July 22. HuffPost weddings found their unique proposal on Reddit, when a friend posted a picture of Flay's handmade ring box and rings. Below, she describes the proposal.

We had discussed around a year ago how we both felt about women proposing to their male partners, and he stated he thought it was fine and should be more socially acceptable. He filed the conversation away and forgot about it, but it was that conversation that made me decide to propose!

I knew that he would have no idea where to start with proposing, getting my ring size, or even picking a ring that he would think I liked, a dilemma I'm sure many men out there would know about! Once I knew he was fine with women proposing, I couldn't get the idea out of my head. The more I thought about it, the more keen I was on proposing to him myself. I never would have done it without knowing first what his feelings were on the subject, but I know he feels the "norm" of men proposing to women is outdated.

I had been intending to propose since September 2011. I purchased the rings in May 2012, and that was when I set the date for July 22, just a few days before his birthday.

I had been struggling for some time with how I was going to present the rings, and then one day I think I was browsing Pinterest when I saw a lamp shaped like the coin block from Mario. The Mario theme seemed so obvious that I didn't know why I hadn't considered it before.

The plan for the text inside the box came later, but I knew for sure I wanted to be Player One, "Ready," inviting him to "Press Start" on marriage. As children, we both had played the Mario games, and we both still love to play them as adults.

The proposal itself was very casual. I didn't want to give myself too much anxiety about the moment, so I made him breakfast in bed, and we sat in bed eating our breakfast together. After we had finished, I went and got the box -- his "birthday present" -- and presented it to him. It was accompanied with a very nervous, squeaky "Want to get married?" after he saw what was inside the box. It was instant relief when he said yes! He was relieved too, because now he doesn't have to plan a proposal!