“There are probably industries where gender is more of an issue,” Yahoo CEO Marissa Mayer said in a recent interview with Backchannel, publishing platform Medium’s tech industry site, “but our industry is not one where I think that’s relevant.”

Mayer, who's been hesitant in the past to declare herself a feminist, was speaking from a personal perspective. Some have claimed that Mayer's male colleagues are spared some of the criticisms leveled against her management style, simply because people are less comfortable with a woman exhibiting many of the traits it takes to run a major company. Her short discourse on gender in tech was an aim to dismiss those claims. “I never play the gender card,” she told Backchannel, “the moment you play into that, it’s an issue.”

Still, there are a variety of reasons why playing the so-called “gender card” may be hard to avoid.

Women entrepreneurs have to overcome a variety of -- often sexist -- hurdles to get funding for their companies:

Less than 3 percent of the companies that received venture capital funding between 2011 and 2013 had a women at the helm, according to a September study from Babson College. Women entrepreneurs seeking funds can be subject to business meetings that turn into date invitations and inappropriate questions about whether their businesses will survive if they change their relationship status or decide to have a kid. 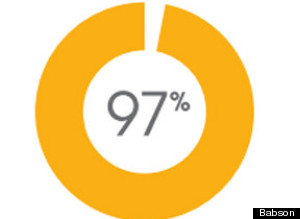 A graph from Babson illustrating how little funding female entrepreneurs get. More than 97 percent of businesses that are backed by venture capital are headed by men, according to the study.

Even when women entrepreneurs don’t face outright sexism, they often have to deal with subtle bias. Many venture capitalists rely on “pattern recognition,” a philosophy that hones in on patterns that have been successful at other companies, to choose who to fund. That means that people who don’t fit the young, 20-something, white-male-with-hoodie stereotype may be at a disadvantage.

In addition, women make up just 6 percent of partners at venture capital firms, according to Babson. That could put women founders at a disadvantage because people are more likely to see potential in those who are like themselves.

The reasons why women make up such a small share of VC partners are being litigated right now in a trial pitting VC giant Kleiner Perkins against one of its former employees, who is claiming she was subject to gender discrimination at the firm.

Women who want to enter the tech industry as employees can find themselves in the minority too:

Spurred by calls from diversity advocates, companies like Google, Apple and Facebook released data last year on the racial and gender makeup of their companies. The results were predictably dismal. The share of women at most of these tech giants hovers at around 30 percent. At Yahoo, the percentage of female employees is slightly higher at 37 percent, though just 23 percent of its senior leadership team is made up of women. 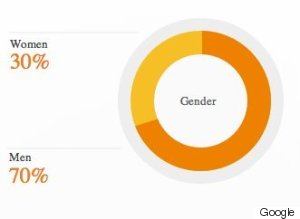 Many of these companies have acknowledged that the lack of ladies is a problem. At Google, HR specialists are using a trove of research to help employees acknowledge and rid themselves of unconscious bias. Intel recently set aside $300 million to boost the number of women, Hispanics, blacks and other minority groups in its ranks.

Still, even once women make it in the door, there aren’t very many incentives for them to stick around:

Forty-one percent of women at tech companies leave after 10 years, compared to just 17 percent of men, according to the Harvard Business Review. A 2008 study from HBR found that a hostile work environment was one of the main reasons these women left.

The Los Angeles Times recently highlighted some of these women, whose complaints included being passed up for projects and promotions or having their projects dismissed or taken away.

“They just kept asking me to prove myself over and over again,” said one 15-year veteran.

And the pay gap that grows with seniority doesn’t help:

Overall, the tech industry has a smaller pay gap than other sectors. And while the difference between men and women’s pay starts off small, it grows as workers rise in the ranks, according to a recent study from Glassdoor, a site where workers self-report their salaries.

Of course comments like those from Microsoft CEO Satya Nadella earlier this year don’t help the case for pay equity. Nadella said at an event last year that women should shy away from asking for raises and instead trust that they’ll get what they deserve. (He later walked back the comments.)

One of the results of all of this: In Silicon Valley, the hotbed of the tech industry, women with bachelor’s and graduate degrees earn 40 to 73 percent less than their male counterparts, according to the the Silicon Valley Index, an annual release of indicators about the Silicon Valley economy and community. 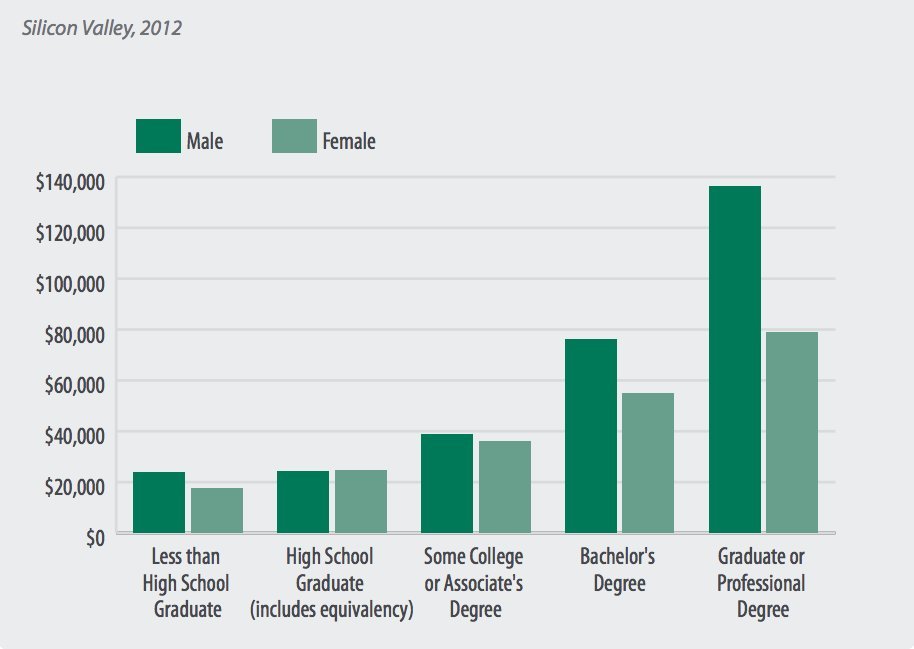