Marissa Sargeant admits her 14-year-old son did a bad thing when he allegedly shoplifted, but she doesn't think he deserved to be roughed up by cops during his arrest.

The arrest happened last Tuesday when the boy -- whose name has not been released -- allegedly shoplifted goods from a Walmart in Tullytown, Pa., with two adult relatives.

She doesn't deny the charges, but said the arresting officers beat the teen so bad, he has a broken nose and two swollen eyes.

“What he did was wrong. He was coerced by a 19-year-old. He does know better,” she said, according to the New York Daily News. “The picture speaks a thousand words.” 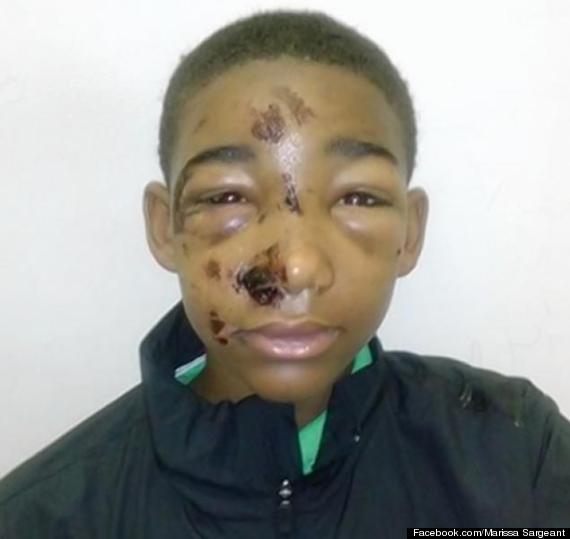 Bucks County District Attorney David Heckler said the officers yelled warnings at Sargeant's son before firing a Taser to subdue him. Police said the Taser struck the boy in the face and, since his hands were in cuffs, he fell face-first without being able to brace for the fall.

"There's no way, if he was running from behind, that he would get hit with a Taser in the front of his face," Sargeant told NBC Philadelphia.

She suspects the officers hit or kicked her son and then told him not to tell anyone before they took him to the hospital.

Heckler told Philly.com that his office may interview eyewitnesses and possibly review footage of the incident taken on a police dashboard camera before proceeding further.

Meanwhile, Sargeant is posting photos of her son's injuries on Facebook in order to force an investigation.

"I just want some justice. I even pray for the police officers because they need help," she told NBC Philadelphia.

“The police department is aware of the misinformation that has been circulating on social media regarding an arrest made by Tullytown officers," he told the Bucks County Courier Times.