Marjan Vayghan is a 26-year-old performance artist who's turned a harrowing detention by Iranian police into a cathartic work of experiential art. 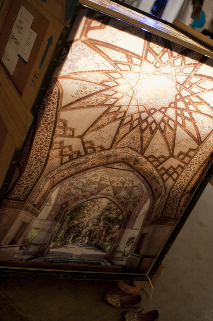 On August 5, 2009, during the Green Revolution, she was with a friend, driving toward a gallery in Tehran, when they pulled onto a street populated entirely by police on foot, in vans and in buses. She grabbed her camera and started to shoot.

"A man started yelling at us -- he was foaming at the mouth," she said. "The door opened and I got pulled out. And it just got worse after that."

She was arrested, blindfolded, hooded and interrogated into the early hours of August 6th. Then she was released.

On August 7, she attended the funeral of a childhood friend. The voids of open graves yawned across the cemetery as far as she could see.

An Iranian native raised in the states, she returned to Los Angeles. She carried with her a tote bag filled with dirt from the grave of Neda Agha-Soltan -- a young woman shot through the chest during election protests on June 20 -- and green revolutionary armbands found at the cemetery.

They would become her pigments, with which she'd work in a series of modular, mobile performance spaces.

Before that process could begin, though, she sat in her closet -- for two years.

The graduate of Otis College of Art and Design, with a master's degree from UCLA, eventually emerged to create four shipping crates with painted, interchangeable side panels of canvas, illuminated from within. Audio tracks stripped from actual video shot during the revolution provide a sound track of sirens and screams. One crate contains the dirt from Neda's grave and another, the green revolutionary armbands. They're all filled with stories collected while the artist was in Iran. 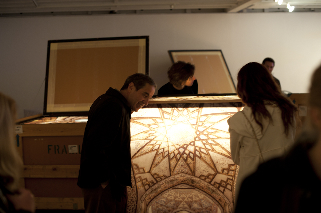 "You can participate and play with them any way you like," she said. "I like to sit inside one of the crates and invite people to come in. It's my way of kidnapping them. When they leave, they're happier, not traumatized. Every single person has left happier."

She only invites visitors in if they ask. And she'll give them her paintings and poems about the things they've discussed, but only upon request. 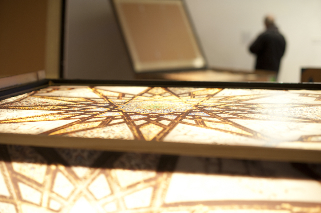 "Fear, violence and trauma operate on a circular pattern," she said. "It's a pattern that I have only been able to mediate through helping others in a creative, healing ritual."

Her work on each crate is a metaphor for how some governments betray their people. "When you open it up, the structure falls apart, because you can hear the people suffering," she said. "The government has gotten good at creating structures with mass genocide within them.

Her next project, she said, will be a giant lotus.

Affaire in the Gardens Art Show in Beverly Hills has organized a night of collaboration and conversation with Vayghan on Saturday, May 21st, at 8 PM.