The second in a series on e-lit, "born digital" literature.

The title of this post is adapted from Hollis Frampton's seminal essay ("Film in the House of the Word," 1981) on the role of text in cinema. Even though the book-to-film equation is familiar to everyone, and, these days, no novel is complete without a "trailer," in conventional fiction, the disciplines of literature and film are sharply demarcated. For writers of electronic literature, the relationship between text and image remains just as fluid as it was for their forebears, the experimental filmmakers.

In the extreme, filmmakers like Stan Brakhage utterly reject text, imagining a world before "in the beginning was the word," an ecstatic visual experience beyond language. Others, like Frampton, suggest that text is useful for exactly that purpose that famed Soviet director, Sergei Eisenstein decried it, for necessitating "fanciful montage structures, arousing (the) fearsome eventuality of meaningless and reactionary decadence." In other words, by reinserting text into film and manipulating the interplay of language, sound and image, the "natural" unity of images and language, familiar to audiences since the "talkie," can be undercut, and the mechanism of cinematic seduction and mesmerization revealed.

It is this subversive potential of text in film which Mark Amerika, one of the pioneers of electronic writing, utilizes in his work. In 2000, his Internet site GRAMMATRON, which combines grainy moving image with text, hypertext and ambient soundtrack, was included in the Whitney Biennial. 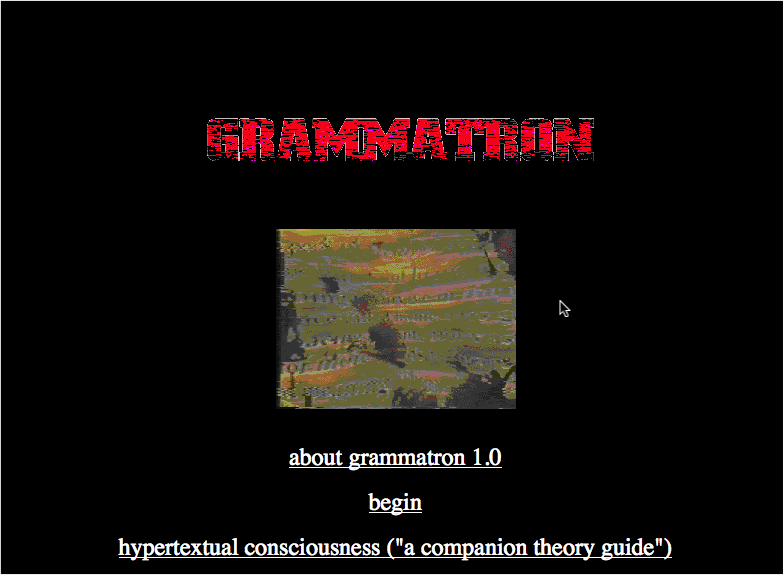 In his cell phone movie Immobilté, Amerika uses extensive subtitles to pay homage to the art-house films that inspired him and act to create a liminal space wherein the imaginative operations of the viewer's mind are revealed and encouraged. 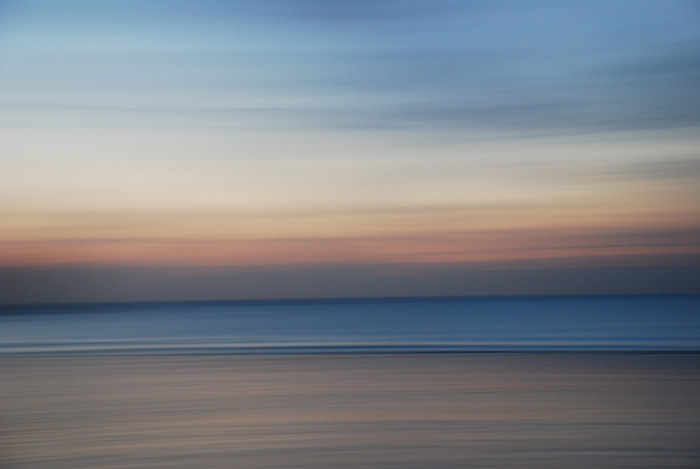 More recently, with "MOGA," the Museum for Glitch Aesthetics, he realizes these spaces through "glitches," imperfect transitions in the narrative fabric, which, because they destroy the illusion of an Edenic, a-historical film-reality, are necessarily characterized by an "aesthetic of failure," with all its anti-utopian and anti-commercial connotations. It is in these virtual spaces, created by the serendipitous interactions of networked participants, that humanity and art incubate.

I asked Mark about his transition from text to multimedia work.

IS: You started out writing text-based fiction (The Kafka Chronicles, Sexual Blood), how/why did you transition to other media?

MA: I have always loved experimental forms of writing. There is a rival tradition in literature that I embrace as my lineage. For me it starts with Sterne and Lautréamont, moves to Joyce and Beckett -- and then the nouveau roman, especially Alain Robbe-Grillet with whom I studied as an undergraduate at the University of Florida. But it goes deeper than that. As a young writer who studied and worked with postmodernist impresarios like Ron Sukenick, Robert Coover and Raymond Federman, I was encouraged to expand the concept of writing to include multimedia forms. In 1993, I had a major revelation that instead of writing my third novel, GRAMMATRON, about a future cyberspace where artists became networked avatars performing in a kind of social media network, I would actually port the entire narrative on to this very new thing -- the Internet.

IS: Do you think of your current work as a form of storytelling -- why or why not?

MA: Everything I do has a narrative and performative element to it. It's very natural for me to tell stories, and is really the way I frame my rhetorical style. Telling a story across various media platforms is really about revealing to the reader -- the one who interacts with my work -- an alternative way of seeing the world.

IS: Both you and David Clark (whose interview appears in the next post) work a lot with film. What is it about the medium that you like?

MA: I studied film at UCLA and eventually with Robbe-Grillet (Last Year at Marienbad) at the University of Florida. Watching foreign films as a teenager totally changed my life. Not only was I immersed in the unusual narrative rhythms of foreign filmmakers, but I also simultaneously had to read the subtitles throughout the film's duration. This means that many of the films that have had the most dramatic impact on my life are films that I have had to read. In my artwork, Immobilité, I refer to the narrative as "a feature-length foreign film." What I mean by that is that the story was developed as if it were a foreign film, but I shot the work entirely on a mobile phone and edited it all on my laptop in iMovie. My intention was to create an experience that intentionally remixes the kind of art-house, auteur-driven cinema that we associate with directors like Antonioni, Godard, and Bergman, and to maintain the subtitles as a crucial part of the reading experience. The difference is, that instead of translating dialogue from another language, the subtitles are actually the interior monologue of unreliable narrator and transform Immobilité into a kind of visual novel for museum and gallery culture.

MA: Ron Sukenick had a great line about the role theory plays in the life of the artist: "Theory for me is like the ink emitted by a squid when attacked." Even so, theory can be a measured investigation into the creative process itself, especially as the artist continually experiments with new forms or new genres or new technologies that they are literally inventing. It's hard for a writer like me, someone who engages with emerging technologies, to not think about what's happening to me and to storytelling, as I make the work. You could even say that I allow my evolving theories to even influence the development of the stories I tell. That definitely happened in Immobilité which led to the creation of my recent book, remixthebook. In remixthebook, I lay it all out for artists and writers looking for ways to imagine new media approaches to the creative act -- to writing and publishing in our digital culture.

IS: Obviously, the question of distribution comes up -- your work is primarily shown in museums and galleries -- but is also available on the web for free. What role does this kind of open dissemination play in your work?

MA: I have always been impressed with how easy it is to locate a distributed network audience for expanded forms of storytelling. In 1993, the same time I was starting to script and develop GRAMMATRON, I also launched Alt-X, a vast online publishing network where, as we branded it back then, "the digerati meet the literati." Of course, who knew how much and how fast things would change? It felt very avant-garde to take leave of the print publishing industry and create new forms of writing for the distributed net audience. Now, of course, it's the most practical way for artists and writers to rethink their practice in relation to future forms of writing, publishing and exhibition.

IS: A lot of the current work seems purposefully low tech using a cell phone for Immobilité, for instance -- I doubt this is purely a practical consideration and I suspect it has to do with the power of the "glitch." Could you comment on that.

MA: With remixthebook, I look at the artist and writer as a remixer, someone who is surrounded by all kinds of audio-visual and textual source material and who has to develop an intuitive performance style in the way they sample and selectively manipulate that source material for aesthetic effect. And, this process can be very glitchy. In fact, how we see and our expectations of what we see are now influenced by the way digital devices and screen interfaces present the data for us. As hard as it may be to believe, GRAMMATRON was actually considered way ahead of its time both in terms of its aesthetic and literary style as well as its technological advancement. At the time, pushing through large animated GIFs, a streaming audio soundtrack, pages that were meta-refreshing at a fast pace and the implementation of this new thing called "cookies" that could redirect the reader to pages they had no control over, were all used to create a cutting-edge technological effect. But now, only 15 years later, it looks like an intentional low-tech aesthetic full of video glitch meant to satirize the more advanced reading interfaces of today.

In my new art work, Museum of Glitch Aesthetics, I used both older mobile phone video footage I shot many years ago as well as HD footage recently shot on my iPhone. The video images captured on the older mobile phones is oftentimes naturally glitchy and creates this very low-tech effect that seems almost romantic to me. Online mapping programs like Google Street View are interesting to me too because the more you push their capabilities, the more glitchy they look and feel. This creates a new aesthetic that we are all getting used to, that we are training ourselves to appreciate the way we would any other image like a distorted painting or conceptually produced photographic print, and is something that I foreground in MOGA.