More students are coming forward to claim that they have been victimized by former teacher Mark Berndt after his arrest on Monday, reports the Los Angeles Times. Their willingness to come forward so quickly after the news broke casts an even darker shadow on the Los Angeles School District's decision to keep school parents out of the loop when Berndt was dismissed in January 2011.

In this video interview with ABC 7 Los Angeles on Thursday, a young girl spoke about how Berndt lured her and a few other students into his classroom, where he served them cookies with a white substance on it. While they were eating, Berndt snapped photos of the group. Investigators have since determined that the white substance was Berndt's semen.

Watch the video and read the whole story on ABC 7 Los Angeles:

Thirty-year-old paralegal Marlene Trujillo, a former student of Berndt's, told the Los Angeles Times that she once complained to a school counselor about his strange behavior. Trujillo, then in fourth grade, told the counselor that Berndt would often move his hands under his desk, and that she had once seen a jar of vaseline in his desk. According to Trujillo, the counselor said "it's not very good to make stories up," and the matter was dropped.

Los Angeles Superintendent John Deasy is now investigating Trujillo's claims as more school officials wonder how Berndt could have carried on undetected for all those years.

On Monday, Berndt was arrested on allegations that he bound and gagged students at Miramonte Elementary School, placed live cockroaches on their faces and fed them his own semen on spoons and in cookies.

His habit of photographing what the children described as a "game" is what aroused the suspicions of a photo technician at a Redondo Beach CVS, who turned the pictures over to Redondo Beach police in the fall of 2010. By December, the case was being investigated by the Los Angeles Sheriff's Department, and by January 2011, Mark Berndt was out of the classroom.

Deasy insists that he barred Berndt from the classroom as soon as he heard of the investigation against him. But for the parents at Miramonte Elementary school, it simply wasn't enough. While investigators, working together with school administrators, were able to identify more than 26 students in Berndt's bondage photos and alert their families, they weren't able to identify all of them, according to ABC News. That means about 10 other children have been without counseling and testing for sexually transmitted diseases for the past 13 months, or the time in between Berndt's dismissal and his arrest.

A forum between parents, school administrators and investigators erupted into anger when Deasy said that the district handled Berndt's case according to police procedure.

"That's cool and fine but the detectives' children don't go here," parent Cheremoya Dupree said to the Associated Press. "I want them to tell the truth ... because I don't think we got that."

UPDATE: Former teacher Mark Berndt was once investigated in 1994 for allegedly attempting to fondle a young girl near her genital area, reports the Los Angeles Times. A detective from the Los Angeles Sheriff's Department investigated the claim and presented it to the district attorney's office, but the case was rejected.

Nadine Martinez Rodriguez, a former student of Berndt's, spoke to CBS2 about how school officials didn't listen when she complained about him. Rodriguez remembers that he often kept his hands in his lap and and a jar of vaseline in his desk. "When I first saw the news about Mr. Berndt getting arrested, I thought 'Wow,' " she said to CBS2. "It just took 22 years for him to get caught." 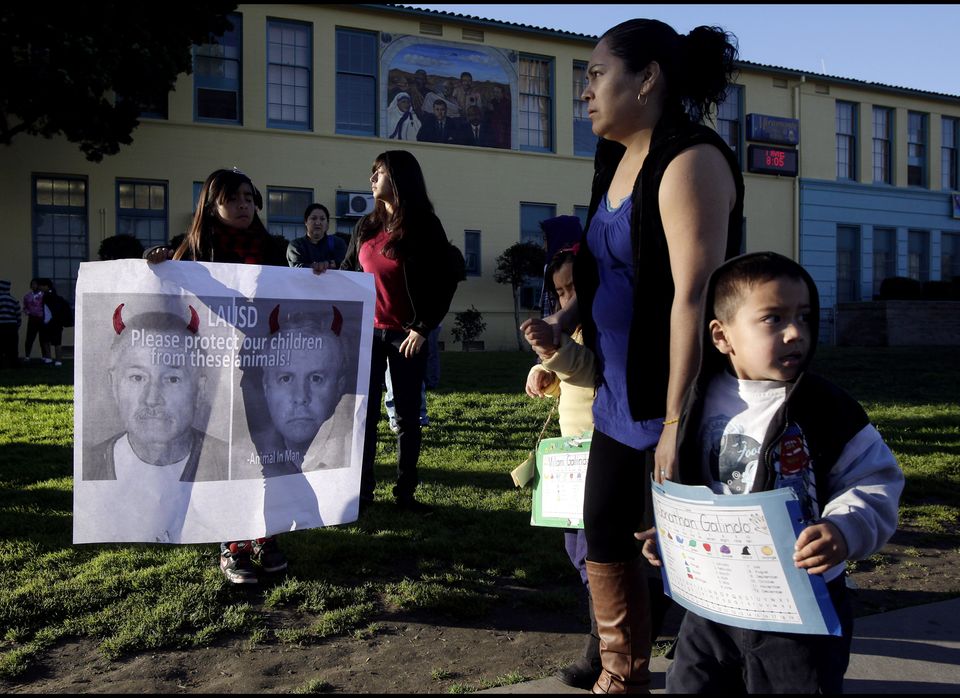