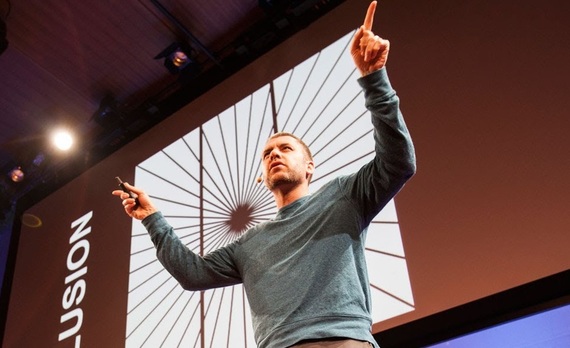 In the Vision Revolution, you focus on four "why" questions: Why do we see in color? Why do our eyes face forward? Why do we see illusions? Why does reading come so naturally to us? Can you briefly answer these questions?

Why do we see in color? - Our peculiar primate-variety color vision is not for finding fruit in the forest (as was thought for a hundred years), but turns out to be optimized for seeing oxygenation variations of blood under the skin. Not in order to see blood per se, but in order to thereby infer emotions, health and state.

Why do our eyes face forward? - We have huge binocular fields (or forward-facing eyes) not for seeing in 3D, but for seeing better in forests. My hypothesis was that, whatever an animal's habitat, it's eyes should be set (whether sideways-facing like a bunny or forward-facing like ours, or somewhere in between) so as to *see the most* in that habitat. When you work out the math of what that means, it makes lots of predictions about which animals in which habitats should have which kind of eyes. And the predictions hold up. Forward-facing eyes better allow larger animals in forests to "see through" leafy clutter, and see more of the forest.

Why do we see illusions? The usual hypothesis about why we see illusions is that it's a sort of mistake. But, instead, I figured it isn't a mistake, but something functional. Namely, it's a result of our slow brains. When light hits your eye, we don't create a perception out of that information that same instant. No, it takes some time, namely about a tenth of a second. And during that time the world changes! So, if your brain just generated a perception from the light on your eye, your perception would be of the way the world recently *was*. And, a tenth of a second is a long time, because even if you're only walking at one meter per second, that corresponds to ten centimeters. So, what the brain does is anticipate what the world *will* look like in a tenth of a second, and generate a perception of *that*. That, it turns out, explains why we see all those illusions. The illusions are actually suggestive of motion, and your brain fast-forwards to the next moment, generating a perception of that. See my TED talk on here. As for reading, see my response to an earlier question.

"The Vision Revolution" would have a big effect on our understanding of the human brain. What implications does it have?

No first. No, because my hypotheses there are *functional* hypotheses. They concern *why* the brain is doing what it's doing. What's it *for*? What in nature, and our habitat, and our behavior, would make us want to see *that* way, or have eyes shaped *that* way, etc.? How the brain actually goes about *implementing* it is a separate question.

Yes, because in order to understand *any* mechanism, you *need* to also have an idea about what function the mechanism is trying to solve, to compute.

You are the first to come up with a theory that humans can actually see into the future. Humans have the ability to visually see the future. How did you make a scientific case for your viewpoint?

The basic idea I mentioned earlier, but to provide *evidence* for it is another matter. One way is to carry out experiments showing people stimuli of certain kinds, where this "perceiving the present" - or "future seeing" - theory makes a prediction about what they should see, whereas no other theory would predict that. The other way is to make a grand prediction about the sorts of illusions we should find across the field of perception generally. I was able to make a huge sort of prediction - involving a 7 by 4 table of 28 separate predictions - and show that this huge prediction holds up. I want that 7 by 4 table on my gravestone, actually.

You have developed a wearable eyeglass device that effectively cures red-green color blindness. Your theory eventually led to the development of eyeglasses that enable wearers to perceive emotions and social cues more clearly -- and, as an unintended consequence, to solve the colorblindness problem. Please elaborate.

Recall I mentioned above that I have made the case in my research that our color vision evolved to detect oxygenation modulations in blood under the skin. Well, my 2ai Labs colleague Tim Barber and I wondered if we could build technology to further enhance this signal. That is, in light of knowing what our red-green vision is "trying" to see - oxygenation variations of blood under the skin - we could build technology purposely further enhancing that.

That led to our company, O2Amp, where we sell a variety of medical viewing technology, including the next-generation in protective medical eyewear that preserves one's normal view of a patient while simultaneously enhancing their detection of health states like veins, erythema, cyanosis, rashes, etc.

Our treatment for color-deficients wasn't unintended. We knew that by enhancing the very signal that red-green deficients are deficient at seeing, we're also aiding color-deficients. We just hadn't anticipated the *interest* level!

I would like to have your take on the futuristic proclamations of Ray Kurzweil at his Earthbase Singularity University. Kurzweil's most famous proclamation is that we are fast approaching the "singularity," the moment at which artificial intelligence surpasses human intelligence.

The trouble with that is that most folks don't realize how little we really understand about human intelligence. We have so SO little idea what *functions* our brains are computing. For example, no one knew that the neural hardware in our eyes was functional for oxygenation / emotion / health detection. Imagine the myriad of other functions our brains carry out, but that we don't know about. And I'm not even talking about the *mechanisms* for carrying out those functions. For AI, they don't much care about our brain's mechanisms, because perhaps the computer scientists would use their own mechanism. But the AI guys DO need to know what functions our brain is carrying out, and without that, they are just building some weird thing having little or nothing to do with intelligence as we know it.

How can our readers stay current on what you're doing now?

I used to write for magazines a *lot*, but have taken a hiatus until the next book comes out. Too much writing for magazines cuts into one's time / brain-space for larger ideas.

What does being an Iranian-American mean to you?

As an Iranian-American I have had the pleasure of having my foot in a second culture, and this is helpful intellectually to remind oneself that one's own culture -- although it feels like nothing / generic / vanilla because one has always done that -- really *is* a culture, and that other cultures are no more or less weird than my own.

In the case of Iranian culture, although totally foreign to most Americans (or, worse, totally driven by images of the 1979 revolution), it is actually very much like our own here in the States in many respects, where for each cultural "thing" here there's some analogous "thing" in Iranian culture. In fact, I have this imprecise feeling that once fully inculcated into Persian culture, it would feel not much different than U.S. culture. ...and more so than many other cultures.