As many of you know, Mark Halperin is this babbling idiot whom Time magazine hired to cobble together this insipid web product called "The Page," which is designed to scam people looking for trenchant, up-to-the-minute political news into giving Time many, many unnecessary ad impressions as you follow Halperin's teasing links to his content. That content tends to be a really dumb listicle, or a one sentence piece of pure and unadulterated banality, or, if you are really lucky, a paragraph or two of analysis that's either so conventional as to appear slam-dunk, or so witless that it's completely laughable and wrong.

There are never any consequences for this terrible content, because the end result is that Time gets to serve ads to sponsored links, like the one I'm reading now that says, "'DO NOT Bleach Teeth' 1 simple trick, discovered by a mom, dentists DON'T want you to know."

But the other feature of "The Page" are the exceedingly juvenile photo illustrations that Halperin provides for his stories. For example! Take Mary Landrieu! She's a moderate Democrat from Louisiana who was holding out on health care reform until she accepted a porky deal that would bring an additional $100 million of Medicaid subsidies to her state. There are lots of ways to serve up this news story! And there are lots of creative ways to put it together for web trawlers. How about, "Mary, Mary, quite contrary?" or, if you're old-school retro, "Mary, Mary, why you buggin'?" Or you could just decide that the best thing to do is be straight about it. Not Halperin, though! Here's the imaginative Photoshop that went along with his "story." 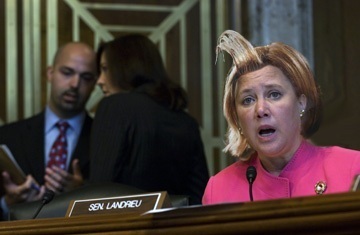 SERIOUSNESS! By the way, here's the "news" Halperin broke, which you could get to by following his links (NEVER FOLLOW HIS LINKS), in their entirety:

"Sen. Landrieu is still reviewing the bill and CBO score. There is no timeline on when she will make and announce her decision on the motion to proceed."

Oh! So, Mary Landrieu is reading the bill, and at some point in the future, she will finish reading the bill? TIME TO DEPICT HER WITH A GENEROUS DOLLOP OF SEMEN IN HER HAIR, THEN.

This image is now only available through the magic of Google cache, because it was taken down, apparently because SOMEONE at Time is operating above a third-grade level.

In any case, Mark Halperin is the worst and should be publicly scorned.