As the Clinton campaign struggles to pull out of a potentially terminal nosedive just four days before the decisive Ohio and Texas primaries, much of the blame for the former First Lady's difficulties is falling on the shoulders of her controversial chief strategist, Mark Penn.

* that he mistakenly assumed that Hillary Clinton would easily bulldoze the opposition,powered by money, endorsements and a legendary name.

* that his strategic strength resides in managing general election campaigns but he has an unreliable sense of the primary electorate.

* that Penn had an inadequate back-up plan for Obama's emergence as a challenger, allowing the Clinton campaign to founder in full public view -- trapped and exposed.

Penn will doubtless be the subject of endless debate, just as journalists and strategists interminably discuss the serial defeats of presidential candidates guided by former Democratic consultant Bob Shrum and the failure of Karl Rove to achieve his promised permanent pro-Republican realignment.

Strategic and tactical fault-finding, however, miss the key point. Clinton's Mark Penn problem does not lie in the strategist's advice and counsel -- it lies in Penn himself.

As the CEO of powerhouse PR giant Burson-Marsteller, Penn heads a bipartisan corporate conglomerate specializing in influence peddling, lobbying, phony front groups, and manufactured hype. Penn, the network of companies that he oversees, and the corporations to which he answers, represent precisely what voters have come to dislike most violently about Washington: the relentless cultivation and manipulation of political connections to generate wealth for a handful of operatives, all at taxpayer expense and in blatant defiance of the public will.

There is no one in politics today who has ascended the special interest ladder as steeply as Penn. He's no Jack Abramoff, but in the public mind Penn, and the corporate structure that supports him, are an integral part of the same lucrative and corrupt system that produced Abramoff.

The problem Penn poses for the Clinton campaign is reflected in the numerous stories in the media about Penn's conflicts as CEO of Burson-Marsteller Worldwide, on the one hand, and as chief strategist for Hillary Clinton, on the other.

To cite one example, just when Clinton was faulting Obama for his ties to Exelon Corporation, it was disclosed that Exelon had paid Burson-Marsteller over $230,000 in contracting fees.

Similarly, after Blackwater USA security guards killed 8 Iraqi civilians, the company turned to BKSH, a subsidiary of Penn's Burson-Marsteller, for strategic advice on how to minimize the negative impact of dealing with Congressional inquires.

Such conflicts only touch the surface. For the media, Burson-Marsteller and its affiliated companies could easily become a full-time beat pumping out a cascade of additional stories:

* The creation of such seemingly innocuous organizations as the National Smokers Alliance, European Women for HPV Testing, and the Coalition for Clean and Renewable Energy - organizations which are in fact the creation of corporations seeking to win lucrative support for contentious fights over smoking in public places, the promotion of highly-remunerative testing for a sexually transmitted human papilloma virus, and the expansion of nuclear power facilities.

* Penn's work for BOTOX, as described on his firm's website, sharply contradict Clinton's feminist commitments and ironically clash with her particularly strong support among older women:

"Burson-Marsteller worked to redefine the BOTOX image to speak to its benefits, drive a relationship with potential end users, minimize safety concerns and reflect its flexibility. Among the critical issues that needed to be addressed were consumers' perceptions regarding the side effects and toxicity of BOTOX Cosmetic....A multimedia initiative targeted key print, broadcast and online media outlets in top U.S. markets, and physician "key opinion leaders" conveyed scientific messages that provided objective, independent thought. The campaign resulted in more than 743 million positive media impressions for the BOTOX brand. Among prescription products, these results are second only to the benchmark launch of Viagra. In the first nine months of 2002, sales increased $90.3 million over the same period in the previous year. Media highlights include coverage in The Wall Street Journal, The New York Times, USA Today, Newsweek (cover story), Time, Associated Press, Reuters, Dow Jones, Bloomberg and UPI. The BOTOX brand was also featured in stories on "Good Morning America," "Today Show," "CBS Early Show," ABC, CBS, FOX CNBC, CNN, CNNfn, Fox News Channel and MSNBC.

From the point of view of any news organization, Mark Penn, who has evolved from a relatively obscure Bill Clinton pollster into the helmsman of the Hillary Clinton campaign, is a walking, talking target -- an over-the-top example of the seductions of Washington, a lethal combination of political opportunism and corporate profiteering.

At this late stage of the campaign, it should come as little surprise that his top position in Hillary Clinton's enterprise would be used to question her campaign's judgment. A succinct portrait of Penn's liabilities was published as early as a year ago by the Washington Post in this relationship map: 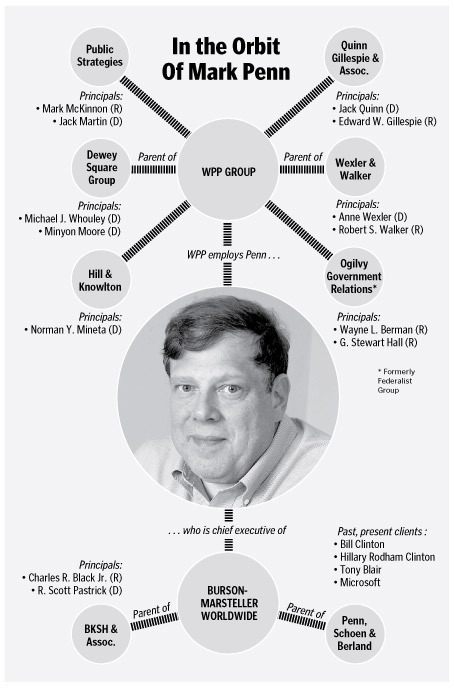