As you most likely have heard, South Carolina Governor Mark Sanford has reappeared after being "missing" for several days. And his return did not disappoint.

Not only did Sanford admit that he was secretly in Argentina, and that he has been cheating on his wife with a woman from Argentina, he did it in song!

I wonder if Sanford will sing another song about using taxpayer money to fly to see his mistress? Especially after trying to refuse federal funds to help the unemployed?

Perhaps a toe-tapper about when he demanded Bill Clinton's resignation for his affair?

Also, a good deal of commentators, including Chris Matthews and Rush Limbaugh, have been commending Sanford for not forcing his wife to stand next to him at the press conference. Are we sure he didn't ask? She did kick him out two weeks ago. Isn't it just as likely that he asked and she said no? And if she did, good for her.

Rush, clearly heartbroken, also said Sanford could've been the GOP's JFK. If you say so, Rush.

One things for sure, Mark Sanford's song and dance routine is just getting started. 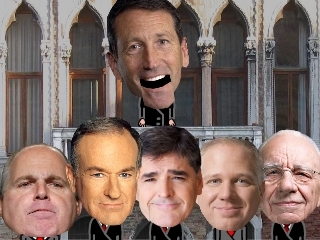