Mark Twain gave us some great books like The Adventures of Tom Sawyer (and some forgettable ones like The American Claimant). He'll always be taught as an American classic, and he'll always be popular during Banned Books Week as well, thanks to Huckleberry Finn, which was controversial even in his lifetime.

But he lives on in ways he couldn't have imagined.

Currently, he haunts the Internet. He's constantly being quoted as saying encouraging, inspiring remarks your mother or your best friend might say to you when you're feeling miserable, or things you'd want on a thought-for-the-day calendar. He's not the snarky, mordant, sometimes-folksy wit of his books, certainly not the man who offered to buy Windsor Castle from the King of England.

The latest inspirational quote attributed to Twain I've seen on Twitter is this gem:

The two most important days in your life are the day you are born and the day you find out why.

The line doesn't pass the smell test: It's just too damned heartwarming to be Twain's. I've spent years reading Gilded Age authors like Twain, William Dean Howells, Henry James, and Edith Wharton. I've even written two Gilded Age novels myself based on immersion in the period: Rosedale in Love and The Vampyre of Gotham. The quote sounds too contemporary.

And in fact, it doesn't appear anywhere before the 1990s, according to a writer who did some research and found Twitter and book references where other people said those words--or variations of them. 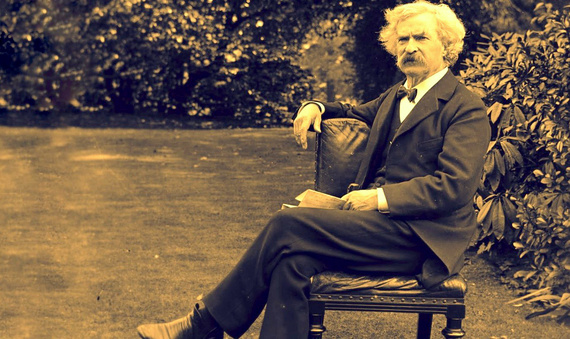 Twain was of course long dead by then, but he's become the go-to guy for every quote you want to make sound authoritative. He has a virtual statue on the Internet: The Most Quoted Dead White Male American Author.

So before he leaves office, President Obama should posthumously award him the Presidential Medal of Freedom for helping so many people believe that he wrote inspirational life quotes you'd find in framed needlepoints at a garage sale. Now, that's Americana.

Of course, it's always possible that somebody has access to a secret stash of uplifting sayings of Twain's that they've been doling out over the years, waiting to release a book about The Real Mark Twain. If you're out there, please tweet something to prove it. Well, maybe not.....

Lev Raphael is the author of Rosedale in Love: A Gilded Age Romance, and 24 other books in many genres.