Just before Sandy landed in New York, two painters, Sangram Majumdar and Karla Wozniak, organized a weekend group show, "Mark, Wipe, Scrape, Shape," at Majumdar's studio, temporarily dubbed Spaceshifter. And, based on what I saw, just in case you weren't sure, I'm here to tell you that painting is alive and well!

The 11 painters, Michael Berryhill, Gideon Bok, Matt Bollinger, Katherine Bradford, Tom Burckhardt, Jackie Gendel, Amy Mahnick, Majumdar, Kyle Staver, Didier William and Wozniak, work in a variety of idioms; perceptual, abstract, poetical, narrative and conceptual. A great deal of time traveling is going on as each painter mines various art historical strains in unexpected and fresh ways. While these paintings could only have been made in our time, the beauty of the present moment is that artists need not be driven by the machine of novelty to be deemed worthy. The dominant tone of these artists' orientation is that of idiosyncratic visionaries, rolling up their sleeves and forging a personal understanding of what painting can do. What is demonstrated here is that the newness is in what each artist brings to the table as each their own brilliant self; original rather than ideological or radical. 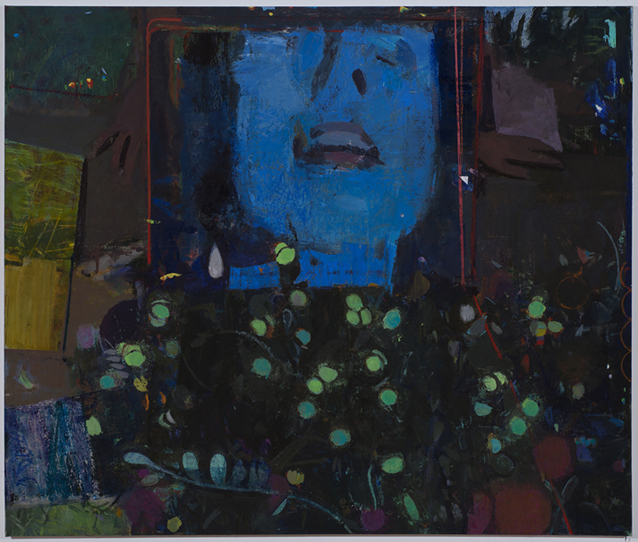 Majumdar's painting "In Dreams" is shaped with a clarity of forms offset by a highly ambiguous space. The impact is of a nether world reminiscent of dreams I've had in which I can't find my way back from whence I came. A woman's visage, glowing blue as if lit up on a computer screen, dominates the upper portion of the canvas, contained within a redlined square and hovering over a kind of ornamental fruit tree with luminescent limes floating in the darkness. Two hands, recalling those of the barmaid from Manet's "Bar at the Folies-Bergère," emerge inexplicably from behind the red lines. Beyond the imagistic adventure there is immense visual pleasure to be had in the anything that works attitude of Sangram's methodology; stenciling, scraping, glazing, shirtsleeves rolled up painting. 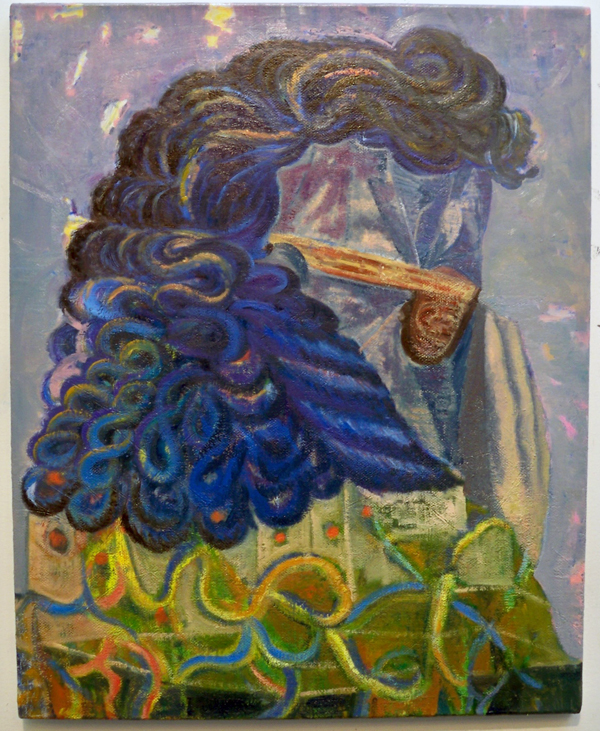 Michael Berryhill's "Blind Faith Forever" is like a mash-up of DeChirico weirdness, Bonnard color, William Blake vision and Archimboldo Mannerism. Part of Berryhill's talent is his complex riffing and shifting within a contained form while never going off the rails. The ostensible subject of this painting, a profile head, could also be perceived as a rock outcropping or an indeterminate still life. I'm reminded of a line from a Borges story, "The Circular Ruins," in which an ancient sculpture is described as being either of a tiger or a horse. Berryhill's handling of the figure's noodly blue-violet hair simultaneously suggests yarn, a bird's wing and a wildly braided military epaulette. 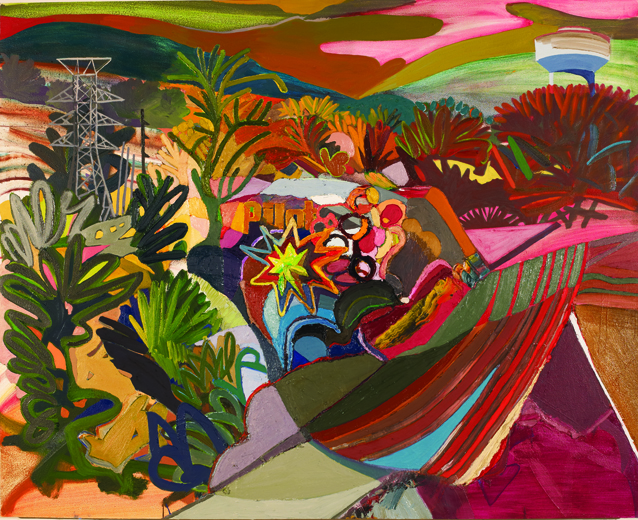 Karla Wozniak presents a somewhat conventionally composed landscape, back-, middle-, foreground; but the illusion is exploded from within by alternately thin and then very thickly sculpted improvisatory striations of paint. Discordant and un-naturalistic color is set against grays and earth tones, further undermining spatial order. The unhinged goings-on are punctuated by interspersed visual anchors: a high power line tower, a Pilot gas station sign and an incongruous green star-burst in the painting's center. Is it the mundane elements invading a hallucinatory world or vice versa? Either way, the impact is simultaneously fluid and awkward and provides a thrilling ride. 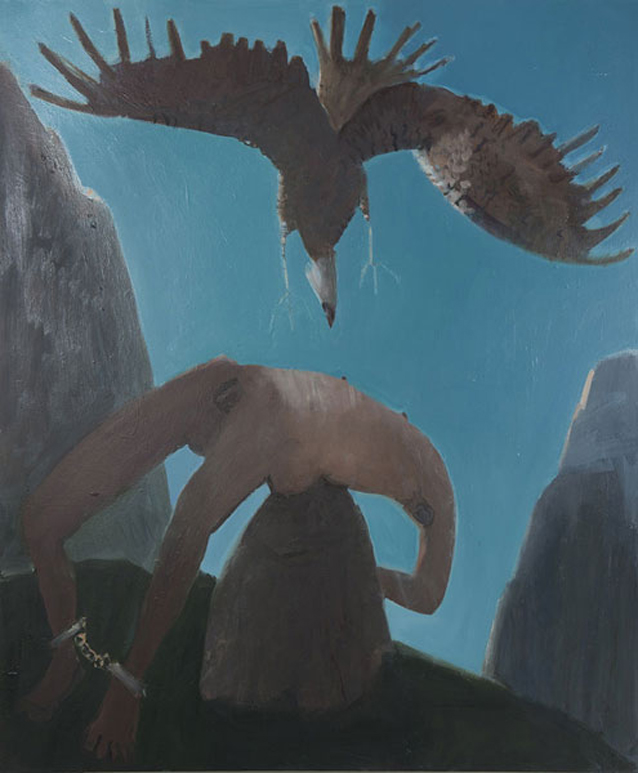 From across the room I was riveted by Kyle Staver's "Prometheus." The piece recalls the painter Paul Georges in its broad handling and the way Staver breathes life into both anathema mythological subjects and courageously takes on the Western figurative tradition with humor and panache. Painted in large sweeping brushstrokes, an enormous eagle dominates the top of the canvas, swooping down on the exposed torso of Prometheus, bent back almost yogically across a conical rock, diminutive genitals vulnerably exposed; the smooth arc of the figure's frontal body against the sheet of flat Cerulean blue sky only broken by the two silhouette dots of his nipples. It's quite a feat to elicit both pathos and a smile with the image of someone about to have their liver ripped out. Staver's ambition echoes that of Prometheus' stealing fire from the Gods.

The problem with most of the work in this show is not a problem with the work at all, but rather with how we value and dialog about art today. The tendency among these artists is that they resist easy encapsulation. In an art world that is very often oriented towards easy talking points, ideological agendas, corporate branding and one-liners it can be all too easy to pass on slower, complex, ambiguous work that raises more questions than it answers. My criticism is that these artists are not more widely recognized. While some are represented, others are not; yet. The only high-profile critic consistently writing about these artists and ones like them is John Yau. (See his recent review on Hyperallergic of the current show at Steven Harvey Fine Art Projects). That said, the recognition that painters such as Nicole Eisenman, Dana Shutz and Judith Linhares have gotten recently gives me hope the art world may be ready to engage with what I regard as a new wave of lively and exciting painters.