A mysterious profile has appeared on Google's new social network, and it may belong to none other than Facebook founder and CEO Mark Zuckerberg.

Zuckerberg's profile photo (if this is indeed him) is a grainy, somber-faced closeup. He looks none too pleased about this new service, which many are calling Facebook’s most serious rival thus far.

So far, over 14,000 people have added this "Mark Zuckerberg" profile to their Google+ Circles, a feature that lets you separate your contacts into groups.

The supposed Zuckerberg profile has only 38 people in its circles. One of these friends bears the name "Dustin Moskovitz." Could this be the same Moskovitz who attended Harvard with Zuckerberg and helped found Facebook?

As with the Moskovitz page, Zuckerberg's "About" page is practically empty. His location is listed as Palo Alto, CA, and his introduction reads, "I make things."

PCMag reports that other, less genuine-looking Zuckerberg profiles may also be found on Google+. Until Google+ comes up with a Twitter-like method of verifying accounts, there's no real way to tell which are legitimate, if any.

Take a look at what appears to be Mark Zuckerberg's Google+ profile. Do you think it's real? Weigh in via our Quick Poll (below).
LOOK: 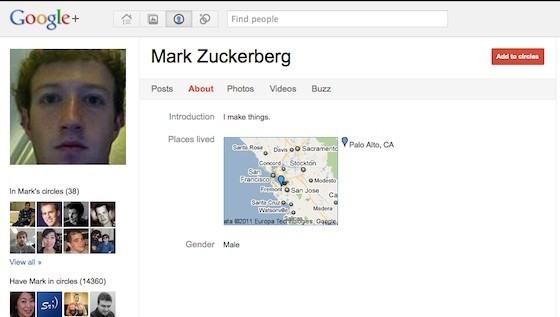