A recently created profile on the popular image-sharing social network has popped up recently, sporting Mark Zuckerberg's picture, a link to his Facebook page, and little else.

So far "Mark" has pinned 3 items, liked one pin, and followed 125 people. Whether this is the real Mark Zuckerberg or not doesn't seem to matter to the more than 3,600 followers of the page.

This isn't the first time we've been a little skeptical of Zuckerberg's social media habits. In July of last year, it looked like he had joined Google+, but at the time the profile wasn't verified. Though with Google+ being Facebook's biggest competitor, it didn't seem to be too far of a stretch that Zuckerberg would join Google's network. (Keep your friends close and your enemies closer, right?) Turns out, the profile really did belong to the Facebook co-founder. Google+ recently rolled out verification tags for popular accounts, and Zuckerberg's profile has been tagged as authentic.

Unfortunately, there's no way to tell whether or not Zuckerberg really has joined the millions upon millions of other people currently using Pinterest. And Facebook won't address whether its founder has created a Pinterest page, according to Business Insider.

If only Pinterest could confirm his identity. But even that might be a lost cause -- Zuckerberg's supposed Twitter account isn't verified and there's no way to tell if his Facebook page is real either, since the new verification feature Facebook rolled out on February 15 doesn't come with a badge. Perhaps the world may never know.

Do you think Mark Zuckerberg has really joined Pinterest? Check out his supposed profile (below), and let us know what you think! 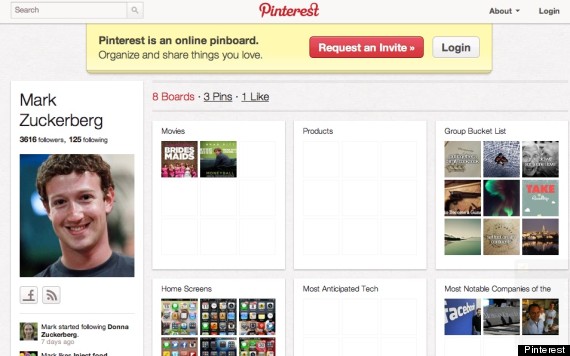