On Wednesday, popular websites like Wikipedia, Reddit, Google and Twitpic joined the ranks of an online protest over Congress' anti-piracy bills, the Stop Online Piracy Act (SOPA) and the PROTECT IP Act (PIPA). For much of the day, these sites blacked out part of all of their content and posted notices urging visitors to stand against the bills, which would allow the U.S. government to shut down websites believed to be enabling or facilitating copyright infringement. According to opponents of SOPA and PIPA, the bills could hinder free speech on the web.

Social media giants Facebook and Twitter remained on the sidelines of the protest, though many had called for the sites to participate in a planned blackout. Instead, users took it upon themselves to "censor" content on their individual profiles. Elsewhere on the web, Reddit took down all of its pages and Wikipedia overlaid its articles with a notice asking users to "Imagine a World Without Free Knowledge."

Despite the social network's hands-off approach to the day of protests, company CEO Mark Zuckerberg on Wednesday reiterated his company's approval of the anti-SOPA movement. In a message posted on his Facebook wall, the CEO wrote the following:

The internet is the most powerful tool we have for creating a more open and connected world. We can't let poorly thought out laws get in the way of the internet's development. Facebook opposes SOPA and PIPA, and we will continue to oppose any laws that will hurt the internet.

The world today needs political leaders who are pro-internet. We have been working with many of these folks for months on better alternatives to these current proposals. I encourage you to learn more about these issues and tell your congressmen that you want them to be pro-internet.

Zuckerberg also took the protest day as an opportunity to tweet for the first time in nearly three years. Check out his tweet, below.

Twitter CEO Dick Costolo recently explained why the microblogging site would not actively protest on January 18. According to Reuters, Costolo tweeted, "Closing a global business in reaction to single-issue national politics is foolish."

In November, Facebook, along with Twitter, Google, Yahoo!. eBay, Zynga and Huffington Post parent company AOL took out a full-page ad in The New York Times to state their opposition to SOPA and PIPA. The letter reads in part, "Unfortunately, the bills as drafted would expose law-abiding U.S. Internet and technology companies to new uncertain liabilities, private rights of action, and technology mandates that would require monitoring of web sites."

Read on for everything you need to know about SOPA and PIPA. Then, check out a slideshow of 11 huge sites that participated in the protests on January 18, and view our guide of how you can access Wikipedia during the blackout, as well as our roundup of 6 ways you can get involved in the SOPA/PIPA protests.

Check the sldieshow (below) to sample some of the blacked-out sites, as they appeared to visitors during the January 18 protests. 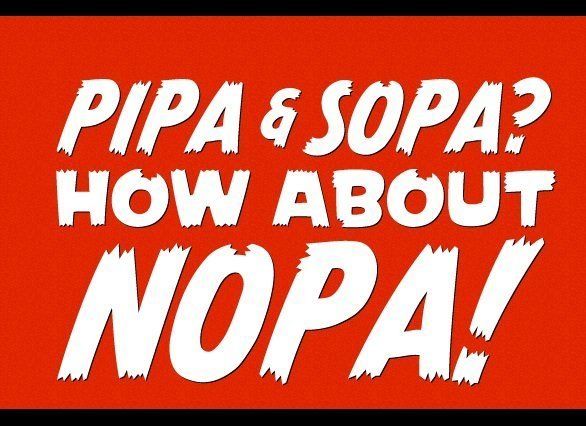