In a Letter to the Editor of the

These benchmarks show how flawed and disconnected this economic theory is from reality.

-- There are 46 million uninsured and at least another 25 million under-insured (generally defined as spending over 10 percent of their annual income).

-- Even among the more than 150 million Americans with employer-sponsored health insurance, a 2007 report by Families USA found that:

a. among the 50 million non-elderly Americans who spend more than 10 percent of their pretax income on health care, four of five are insured.

b. of the 13.5 million in families spending more than 25 percent of their pretax income on health care, more than three of five are insured.

-- A majority of uninsured and underinsured go without necessary health care because of costs.

-- The costs of cancer care are going through the roof at rates much higher than for general medical care; a 2007 study by the Kaiser Family Foundation and the Harvard School of Public Health found that nearly one-half of cancer patients without consistent health insurance coverage use up all or most of their savings, leaving them short for basic necessities.

A 2008 study by the Centers on Budget and Policy Priorities found that 2.4 million elderly Americans have been driven into poverty by medical bills, despite having Medicare coverage; seniors now spend 22 percent of their annual incomes on health care (compared to 15 percent when Medicare was enacted in 1965).

Medical bills account for about one-half of the 2 million bankruptcies each year; of those bankrupted, 3 of 4 were employed and insured when they fell ill.

-- Household debt today is at the highest level since 1933.

-- A 2008 analysis by Deloitte's health research center has found that medical care now accounts for 16.6 percent of the average American household's income, more than housing (14.4 percent) and food (13.1 percent).

-- Consumer confidence has fallen to a 28 year low.

-- A recent Rockefeller Foundation/Time survey found that 85 percent of Americans feel that the country is headed in the wrong direction, with a majority saying that "the American dream is no longer attainable"; 80 percent believe that whatever social contract we have had has deteriorated, and that a new one is needed.
-- The accompanying graphic shows in brutal detail that the robber baron era preceding the Great Depression has reappeared with an even wider gap in 2006 between incomes of the top 0.01 percent and the bottom 90 percent of U. S. families. 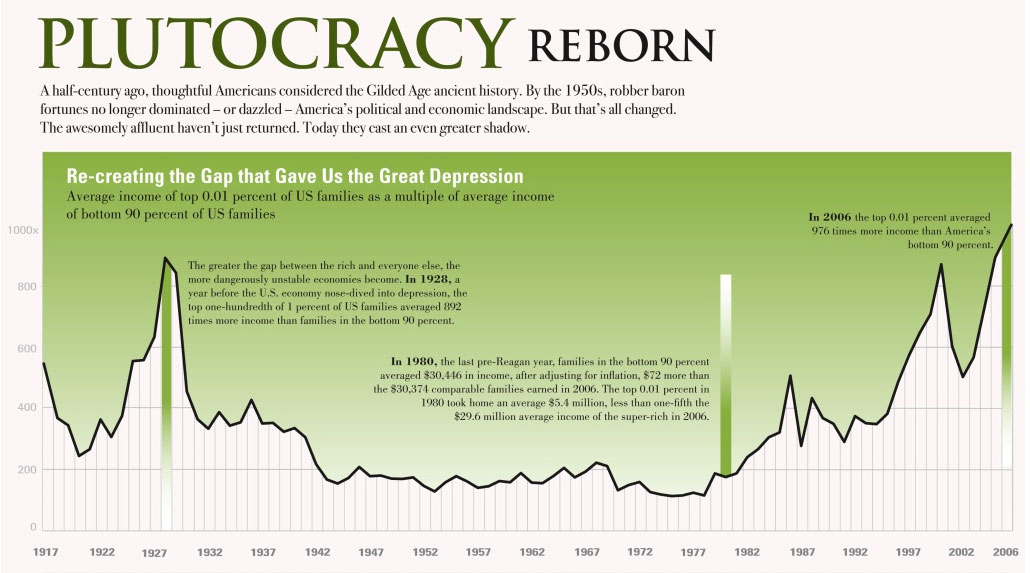 These points make clear how untrue and preposterous the trickle-down theory of economics really is. It is a cruel hoax. We are in the second Gilded Age, and conservative market policies fail the public interest. A recent article in The Nation by John Cavanagh and Chuck Collins of the Washington-based Institute for Policy Studies, describes our current predicament in these terms:

"Our top-heavy era has evolved from a heavily bankrolled effort by conservatives and corporations to instill blind faith in the market as the magic elixir that can solve any problem. This three-decade war against common sense has preached that tax cuts for the rich help the poor, that labor unions keep workers from prospering, that regulations protecting
consumers attack freedom. Duly inspired, our elected officials have rewritten the rules that run our economy - on taxes and trade, on wage policies and public spending - to benefit wealthy asset owners and global corporations. To reverse this reckless course, we need to change our nation's dominant political narrative and restore faith in the critical role that government must play to protect the common good."

In future posts we will address some directions for health care reform which will bring necessary care within reach of all Americans based on medical need, not a disappearing ability to pay in our runaway market-based non-system.

Adapted from: Do Not Resuscitate: Why the Health Insurance Industry is Dying, and How We Must Replace It, 2008 by John Geyman. With permission of the publisher, Common Courage Press.