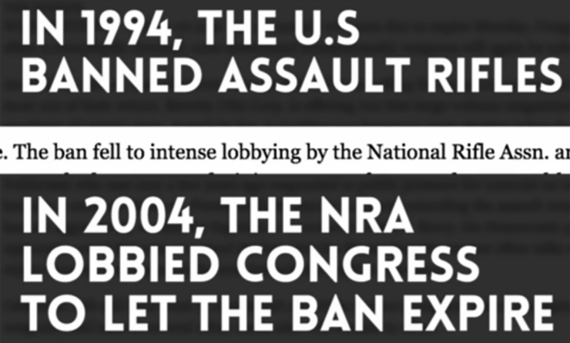 After the slaughter of 20 children and six adults in Newtown Connecticut, some expected the National Rifle Association to relent, just a little, to offer some kind of rationale compromise that might help in some small way to keep guns out of the hands of dangerous people. At the very least, we thought they would stay quiet.

Not a chance. He waited about a week but then gun-salesman in chief Wayne LaPierre came out swinging, calling on his followers to do what George W. Bush asked of the American people after 9-11. He told them to go shopping. He did it bluntly -- calling for the arming of teachers in our elementary schools and in a slightly more veiled way -- warning of the government's imminent plan to seize all your guns.

It was marketing genius, NRA style: Use a tragedy to sell more guns for the profiteers who really run the NRA -- the gun companies. As we show in Making a Killing: Guns, Greed, and the NRA, those gun sales are the reason the NRA exists at all. And it works, perfectly.

Sales of assault style weapons like Adam Lanza used to gun down small children spiked in the weeks after the tragedy. What's more, politicians look at those numbers and believe -- against all logic and reality -- that the gun buyers represent a majority of the electorate who will rise up against them should they take any rational steps to prevent gun violence.

We haven't heard from LaPierre yet, but it is just a matter of time. What he comes out with -- arming bouncers at night clubs, handing out pistols once inside like free drink coupons, is anyone's guess. Probably, he will talk about terrorism, stoke some fears and pretend this hate-filled maniac was acting as part of a grand conspiracy that we can defend against if only each and every one of us had a weapon of war at our disposal.

Most likely, the sale of AR-15s will spike again as the already-armed enhance their arsenals to protect themselves against anyone who looks different than them, or worships in a different way. They'll have no problem getting these guns despite the fact that there is no reason whatsoever that they should be legally on the market. Or, as Dave Hoover, a police officer whose nephew was killed in the Aurora theater shooting puts it: "You don't go hunting with an AR-15 unless you are hunting humans."

We have seen it all before and we could see it again and again and again, unless we do something. Let's start by calling for a full-on permanent ban on weapons like the AR-15, guns that were designed to do exactly what they did, in Orlando, in Aurora, in Newtown, in San Bernadino, in Umpqua, in...