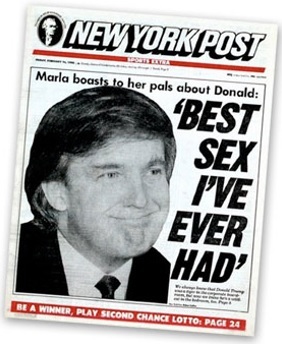 This headline splashed across the front pages of New York tabloids like a bomb shell.

New York reporters knew then that the Donald was the real thing. "The Donald" story, already fodder for the dailies, had legs and would continue on for years and years.

And so it has.

Marla Maples, Trump's second wife, said, "I had Mister Charm all over me, and it was very hard to say no. When that man wants something, he'll stop at nothing to get it. And I also believed in the good of him."

Today during an appearance on The View, Maples said that she "loved him for his hands," and that he "doesn't want to provoke violence. He wants to create more peace."

I first met the Donald nearly 30 years ago at his office in Trump Tower.

Everything was the best: the best view (he pointed out the window toward 5th Ave and Central Park), the best marble on the floor (he even traveled to Italy to choose it!), the best boat (he vacationed on a 282-foot yacht, the Trump Princess), the best plane, and the most magnificent dresses on the most beautiful wife.

The self marketing master had twenty magazine covers plastered all over his wall. Each cover featured the face of Donald in front of some project or another.

He was braggadocious, boastful; his preening ostentation seemed to know no bounds. He seemed to believe everything he said, and he desperately wanted everyone else believe to it too.

I was flabbergasted. I had never met anyone like him.

I didn't believe a word he was saying.

I was so skeptical. But his charm and apparent sincerity and grandiosity were infectious. I soon came to admire the way he spoke. He was so innocent, so boyish. He didn't seem to understand the ways of the truly rich and powerful, the art of understatement.

His models of boats and planes and buildings were scattered around his office like a small boy's toys. It smacked of a certain lack of self-esteem.

He reminded me of the scene in The Great Gatsby, when Robert Redford, in the movie, is frantically dragging down dozens of shirts to impress his true love Daisy:

F. Scott Fitzgerald wrote, "He took out a pile of shirts and began throwing them, one by one, before us, shirts of sheer linen and thick silk and fine flannel, which lost their folds as they fell and covered the table in many-colored disarray."

Trump's flaunting material goods is reminiscent of the excesses described by Thorsten Veblen during the Gilded Age -- 1880 to 1900 -- when titans showed off their social status with flamboyant displays of conspicuous consumption: grandiose mansions, private railroad cars and the like.

Donald is a new money icon of quintessential Americanism of which there are many examples -- the richest, smartest and luckiest guy around -- the Music Man, writ large, carnival barker of the American culture, a caricature.

Donald is a believer in the big-lie theory. If you say something again and again, the voters will believe you. Republicans have practiced such voodoo economics for years, according to Paul Krugman.

This is how Trump does his deals. His genius is in figuring out what people really want. The fantasies and the baubles that voters really want are: "Make America Great Again," keep us safe and out of wars, take us back to a time that made sense. The strong man will do it.

It would be sheer folly to expect unwavering consistency, or even complete honesty from politicians during an election, much less during a nominating process.

Democracy is the art and science of running the circus from the monkey cage, as H.L. Mencken once said. Trump is making politics fun again. He's an entertainer.

Americans have become cynical about politics and politicians. They expect candidates to pander to the polls -- to become liars, unprincipled political opportunists. Americans know they need a president with a different skill set: someone who is strong enough to change the course of time. Someone who is not too fastidious to do what it takes to win and accomplish this.

But think of the madness of what the other Republicans have gotten us into: the invasion of Iraq, Afghanistan, Libya, resulting in the deaths of more than a million people, the creation of more than 3 million desperate refugees, inciting the hatred of nearly the whole Muslim world.

Trump, who is fundamentally a nativist, opposed the Iraq War and called it folly. He seems to be committed to less aggressive, more isolationist policies. I don't believe he will get us into new wars. All the other Republicans supported the Iraq War and aggressive imperialism. They have brought us the worst foreign policy disasters in our history. And that's saying something.

Maybe I am being too kind and have been suckered. At least Trump will stop this foreign policy madness.

I believe that Trump will support a national health care policy and not leave people dying in the streets. He will keep Social Security as it is. All the other Republican want to destroy Obamacare, gut Social Security, and they don't really care what comes later.

Trump has been a messenger to the Republican Party. He has correctly identified the problems. Money in politics is evil and pernicious. He knows firsthand. America has been too imperialistic. He doesn't say these words of course, but this is what he means. And he acknowledges that we need a form of universal health care.

His solutions are ridiculous and often ugly and outrageous, but they're designed to grab media attention.

In his book, The Art of the Deal, Trump wrote, "If you are a little different, or a little outrageous, or if you do things that are bold or controversial, the press is going to write about you."

The first rule in politics is: if you don't succeed in the short run, there will be no long run.

I cannot see myself ever voting for Donald Trump.

But when it comes to the Republicans, I agree with Paul Krugman of The New York Times, who wrote:

"Yes, he's a con man, but they all are. So why is this con job different from any other?"

"The answer... is that the establishment's problem with Mr. Trump is not the con he brings; it's the cons he disrupts."

Cruz and Rubio, and, yes, even Kasich are Tea Party neocons who are likely to get us into new wars, kill women's right to choose, and remove healthcare protections for tens of millions. Krugman says it's voodoo economics and neocon fantasies all the way down.

But in the end, the reason I hope Trump wins the Republican nomination is that it will be good for the Democrats. Even the clever Trump will not be able to convince half the voters that he is qualified to be president according to most polls in Real Clear Politics.