AT&T technician David Baxter was out on a call in a remote part of Southern California last year when he found a severely malnourished dog bound up with twine.

"It was very sad to see a dog in that kind of condition," Baxter says.

The pup was frightened and shaking, and the twine was cutting into her body. Baxter knew he had to help, but the dog was too scared to let him close. So he poured some water into a bucket to lure her.

"She came to that. She let me pet her. Calmed down a bit," he says.

After cutting the twine off the dog's hind legs and neck, Baxter fed her his lunch.

"Ham and turkey sandwich on wheat bread." he says. "Then I called animal control."

An officer came to collect the skin-and-bones pup and promised Baxter that she'd be cared for. 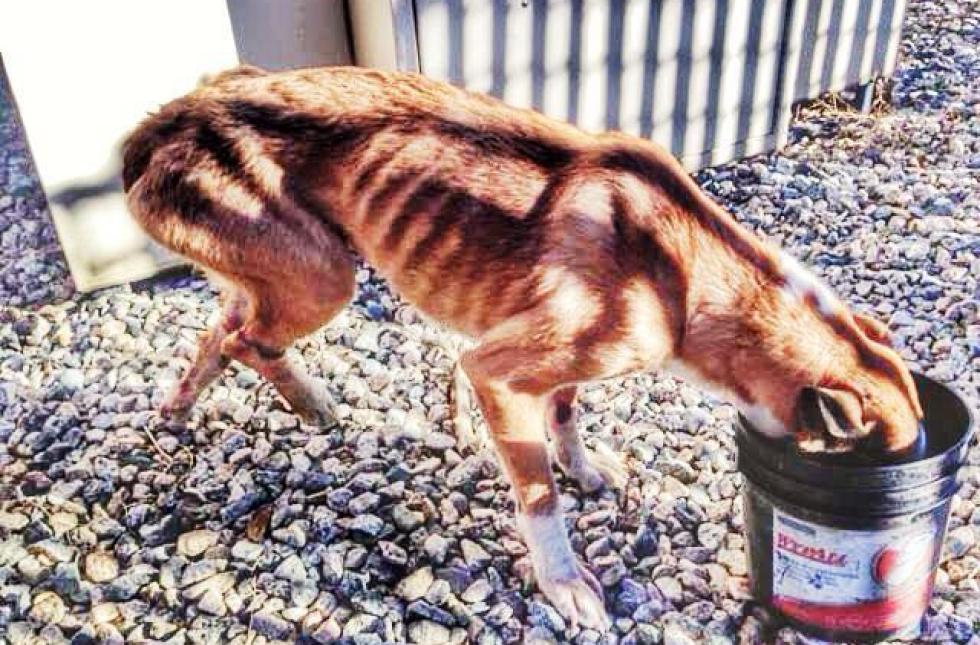 Dora, at the time of her rescue. Photo credit: David Baxter

It wasn't long before Zach Skow, founder of the rescue group Marley's Mutts, came into the picture.

"I first learned of Dora when an [animal control officer] sent me pics of her," says Skow. "She had just responded to the scene and immediately reached out, knowing this was a special case which we'd be able to help. Before she had reached the vet hospital, we were there."

Marley's Mutts was founded about half a decade ago, in part to help Skow overcome his own problems brought on by years of drug and alcohol use. The group specializes in abandoned and abused dogs, as well as dogs slated for euthanasia at the local shelter. (One of Marley's Mutts' mascots is a mastiff who nearly starved to death while in a shelter, because no one there noticed that his tongue had been cut out.)

"Our motto is 'all creeds, all breeds,' because mutts and throwaway dogs are what helped this throwaway human," Skow says, referring to himself.

The dog Baxter found was in alarming condition, but Skow wasn't shocked.

"She was not an unusual rescue for us. We are accustomed to all manners of horrific rescue scenarios involving baffling abuse," he says.

After being treated by the vet, the doggie -- now called Dora -- wasn't emotionally well enough to go into foster care, so she lived with Zach, his dad and their pets. She settled in, learning to trust her new humans and fellow canines. 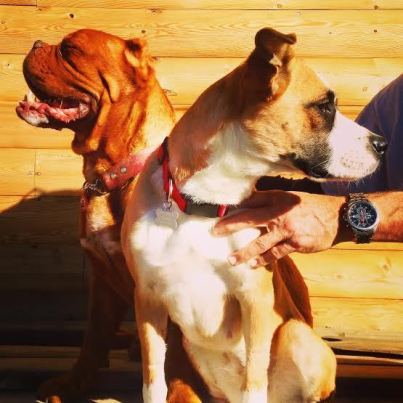 In December, Dora even got to see her original savior again. Coincidentally, Baxter was called to fix Skow's landline.

"She looked great," Baxter says. "It was really good to see her. To know she's going to be OK."

Here's a video of their unexpected reunion

Not long after that, AT&T's internal newsletter included an item on Dora's rescue. Kevin P. Smith, a senior technology project manager in the Bay area, read it and became furious over the dog's story.

"Then, once my rage subsided, I investigated the story through Marley's Mutts, and dropped an application for the adoption of Dora late that very Friday afternoon," he says.

Within an hour, he and Skow were talking. And early Saturday morning, he and his wife, Karen, and their rescue Dante were on the road to collect their new dog. 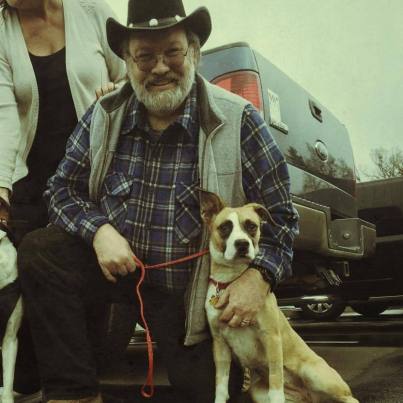 She's been a wonderful addition.

"Dora is an angel of a dog! So loving and gentle," says Smith, adding that Dante is getting over a teeny, tiny case of initial jealousy.

"Dante has been learning, and Dora and him are behaving now like they have been best buddies forever," he says. "If I could ask a personal favor of all dog lovers: please consider a donation to Marley's Mutts or to their local pounds. It takes a lot of money to properly save/rescue dogs and care for their needs."

Skow has a request, too -- but it has nothing to do with money.

"People should learn from Dora the qualities which are truly inherent in her, down to her bones: forgiveness, acceptance, perseverance, no complaints, love and resiliency," he says. "She loves life and the people in it unconditionally, and so should we all."

Find out more about Marley's Mutts on the group's Facebook page -- where you can see photos of adoptable dogs, as well as regular updates about Dora.