With Versace resort wear, David Beckham's undies and now Marni, H&M is on a roll in 2012.

H&M's collaboration with Italian womenswear label Marni was announced last November but is fast approaching. The colorful goods, which will surely reflect Marni designer Consuelo Castiglioni's penchant for graphic prints and jewel tones, are set to hit stores on March 8.

But Fashionista spied what is likely the first campaign image on The Fashion Spot, showing a brooding, darkly lit scene with a model lounging in a shiny print blouse -- only 69.65 euros.

While not much else is visible in the way of clothes, the colors are rich and the contrast of prints (the ad shows geometric patterns against paisley against leopard print) gets us excited for the actual goods.

We're guessing the line will be chic, fashion-forward, understated and somewhat dark, just like the upcoming commercial's director, Sofia Coppola. Coppola is helming the video portion of the Marni for H&M campaign, as indicated in the bottom left corner of the new ad.

Take a look at the first leaked pic. Are you psyched for H&M's latest designer outing? 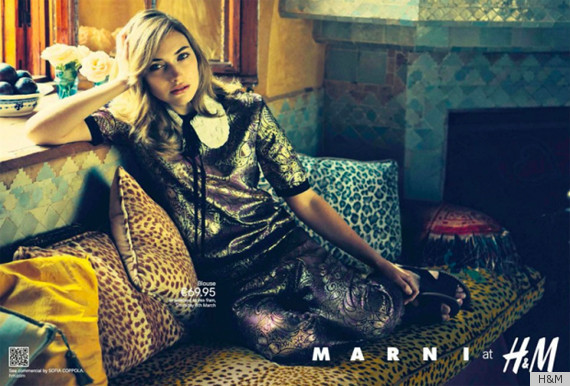