For the past decade, the U.S. government has been spending hundreds of millions of dollars to promote healthy marriages -- but new research indicates that this spending may have been a waste.

From 2001 to 2010, the U.S. government spent roughly $600 million on the Healthy Marriage Initiative (HMI), which focused on the formation and maintenance of healthy marriages through education, counseling and advertisements. The thinking behind the program was that the economy and the country would benefit from more successful marriages and lower divorce rates.

But a new study from the National Center for Family and Marriage Research at Bowling Green State University concluded that spending on HMI had little to no effect on marriage and divorce rates (see chart below). In fact, even when spending reached its highest point ($142 million in 2009), marriage rates continued to decline and divorce rates remained relatively stable. 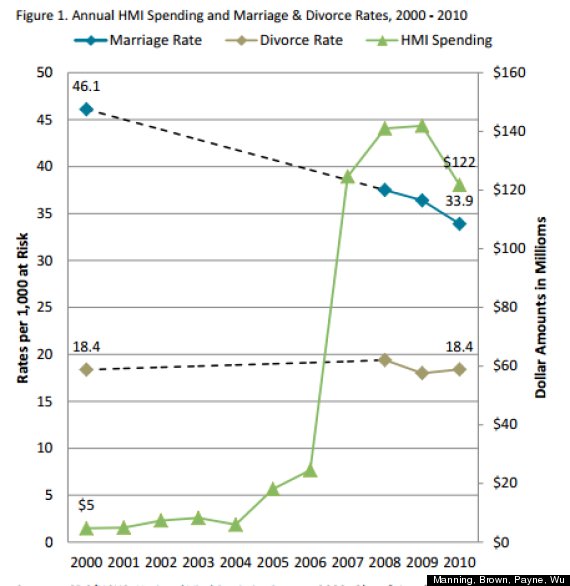 According to the report, the five states that spent the least amount of HMI money per person all saw their marriage rates decline, but four of the five states that spent the most money also saw their marriages rates decline. In other words, the money spent promoting marriage in those states had little effect on improving the marriage rate.

The researchers also noted that while the divorce rate dropped in some states and rose in others, the top and bottom spenders had similar divorce trends, meaning the program was not necessarily a driving factor in preventing divorce.

The only place that benefited from HMI spending was Washington D.C., which spent the most money per person and saw a 35 percent increase in their marriage rate.

"That does call into question: What are the measurable benefits?" asked lead author of the study Susan L. Brown in the Los Angeles Times.

Indeed, in the last few months, several reports have stated that promoting marriage as a means to boost the economy is a fruitless endeavor.

While it was long believed that marriage could pull people out of poverty and increase spending (evidenced partly by the fact that married Americans spend more than their single counterparts), new research indicates that's simply not the case.

Recent studies have found that as the economy is recovering, the divorce rate is actually increasing. And other research has indicated that impoverished single mothers would have been better off staying single than tying the knot.

What do you think: is this program worth keeping around? Comment below.

Divorce Findings From The Last 5 Years
More:
MoneyPoliticsdivorcedivorce ratesEconomy
Newsletter Sign Up
An essential daily guide to achieving the good life
Subscribe to our lifestyle email.
Successfully Subscribed!
Realness delivered to your inbox