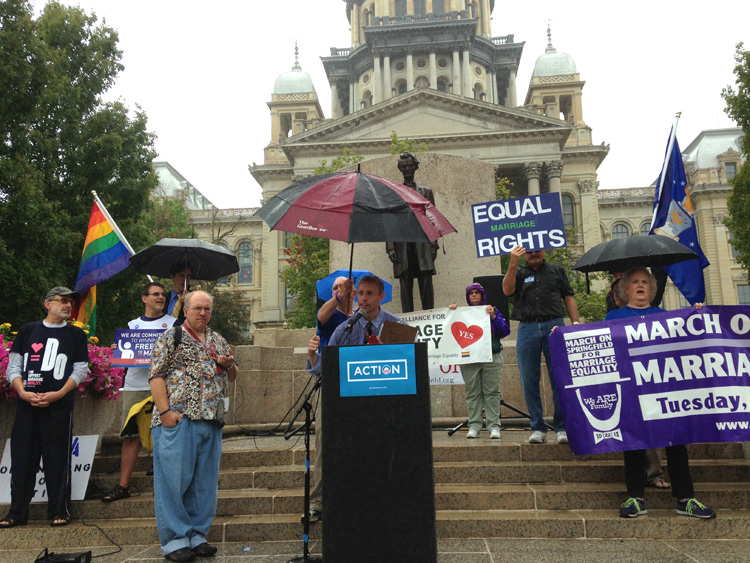 Scott Cross of the Organizing for Action-Springfield chapter at a Sept. 20 marriage equality rally in Springfield. Photo by Tracy Baim/Windy City Times


There is a lot of buzz about the timing of the push for a vote on the Religious Freedom and Marriage Fairness Act, otherwise known as the marriage equality bill in Illinois.

The question is, who controls the strategy? Is there any way to know for sure what the "community" wants? No, not really. Getting consensus in our community is worse than herding feral cats. But based on the push for a vote in May, and the increasing pressure for a vote from leaders and activists all summer -- and now into the fall veto session of the state legislature -- there appears to be a critical mass of Illinois citizens who want a vote sooner, not later.

Some people say don't push the vote until we know for sure it will pass. On an emotional social justice issue, sometimes people will not commit until they are forced to choose which side of history they want to be on. So until the vote, we may not know who is for us, against us, or who will simply never commit either way.

That's why this issue is so complicated. You can't know the true vote until the vote is called. Thus, our elected officials can't make any promises on the bill passing later. They can claim that they have the votes in January -- even though they do not know where they truly stand this fall. A vote in the hand is worth far more than what any two politicians can promise us in the bush.

Yes, a January vote could mean faster implementation of state marriage rights for same-sex couples (unless they had enough votes this fall to move up the start date ). But what happens if they keep the delay going, until everyone is "safe" from a political challenge? With the Illinois primary season so many months ahead of the general election, that means representatives are basically always running for re-election. The "safety" zone is small -- and there are very few examples of successful challenges to elected officials who back LGBT and marriage equality. Actually, it's the other way around -- legislators have lost because of their anti-LGBT votes.

It also means the community will continue to spend money and time on an issue that should have been resolved earlier this year. We have a lot of issues that need attention, and marriage really should be settled by now. Illinois became a majority Democratic state in part because of the party's claims to be pro-LGBT; well, the Democrats are losing major credibility on a variety of fronts, including on this issue.

While there is a slight chance that passage in January could be guaranteed, there are far more upsides to voting on marriage equality this fall. Here are a few reasons why we should vote, and why we are operating from a position of strength in doing so:

If ever there was a time to press hardest for a vote, it is now. We have all the power, we have the momentum, and we have fallbacks to get people covered while we wait for Illinois legislators to catch up to history.

I also propose a strategy if the vote does not happen this fall:

A lot of people have called me naive ( and worse ) when it comes to pushing for a vote in May -- and now. But I am not alone in wanting to know where people stand. They do not need more time to decide if they have the courage. You either have it or you don't. If your career is more important than your integrity, or than doing what is right, then maybe you are in the wrong profession. In the 1980s Chicago City Council, the community pressed multiple times for a vote on the gay-rights law, and each time more politicians joined the side of justice. But we had to start with a vote to know where to press for change.

I leave our politicians with these quotes on courage: "Inaction breeds doubt and fear. Action breeds confidence and courage. If you want to conquer fear, do not sit home and think about it. Go out and get busy," Dale Carnegie.

"I learned that courage was not the absence of fear, but the triumph over it. The brave man is not he who does not feel afraid, but he who conquers that fear," Nelson Mandela

Let me be clear: There is a lot more to lose here if they delay a vote than if they lose a vote. There is far more courage in fighting for what is right and losing than staying on the sidelines. If we lose, we will fight another day ( and encourage people to get married in other states in the meantime ). And if a similar bill returns next spring, and passes after a lot more work, it would start the same time as if it were to have passed this fall with a simple majority. But we do not want that.

What do we want? A vote. When do we want it? This fall.

Tracy Baim is founder and co-chair of the March on Springfield for Marriage Equality, and Publisher of Windy City Times.
http://www.windycitymediagroup.com/