It's been a weird couple of days.

My 17 year old self would be so happy right now. After crying in a counselling office when Bush was re-elected and all of my Southern Californian classmates rejoiced, I would have lauded this day. Though Bush's continual threat to create a constitutional amendment defining marriage between a man and a woman was little but political pandering, to me the threat of being taken from my mother's partner was real.

The lack of healthcare options was real. The double federal tax because they both had to file as single despite being recognised as "domestic partners" in California was real. Still I celebrated by wearing a hand written t-shirt to school when they drove 8 hours during the short period marriage was legal in San Francisco and married in front of the court house.

I'm sure my mother still has the check refunding her $30 for her state annulled marriage framed. 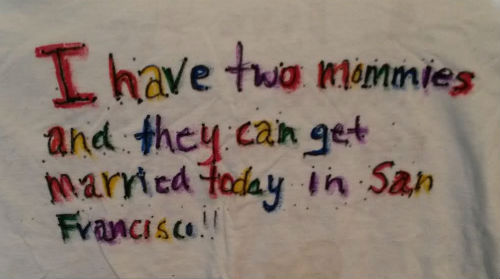 I didn't grow up with an anthem telling me that I, or my mother, were born this way. I didn't see lesbian or gay people on television, let alone bisexual people or transgender people. I lived with bullying about my gender presentation so thick it felt suffocating. I was called a "lesbian" and not anything worse because "lesbian" was the worst already. My first Pride was a small nearly secret meeting in a park in Virginia where no one raised their voices.

By 14, I was active in the Marriage Equality movement in California. I gave a talk in my history classes about the importance of the 2,500 plus federal rights that legal marriage would give same sex couples. I stood in the faces of people screaming "Get your hands off marriage!" and sang that what the world needed now was love. Sweet love.

As I look back on my teenage self, and the struggle that my mother and her partner went through, I realise that if this day had happened ten years ago, yes I would have been happy. But the immediate threats we faced would have stayed put. There was no recourse for poor queers when my mom would go to a job, have a great first day, be spotted getting into a car with a rainbow sticker and be mysteriously asked not to return.

There was no real recourse for my mother when she was targeted by homophobic bosses, no specialist car insurance for bricks that busted her window, and no help when I nearly faced homelessness instead of university. My mum would have been married and jobless, then married and homeless. But hey, some freedom is better than none, right?

It's been a weird few days for me because I never thought I'd see myself here. As an agender person, as a bisexual/queer person, I slowly came to realise how limiting the frame of "equal marriage" always was. I guess I should have realised it when my mother's partner transitioned and they were essentially booted from the marriage equality movement. But for a long time, marriage was such a symbol for me. It was something simple. Legalising marriage for all had a lot less political strings attached than labour rights.

I never thought I would see the day the SCOTUS in the US legalise same sex marriage pass me by without much personal fanfare. And as happy I am about what this symbolically means, I can't help thinking how this wouldn't have helped CeCe McDonald in prison. How this doesn't help the trans women trying to stay alive day in and day out. I can't help seeing myself as an agender person in the UK, rejected and dismissed by Gender Identity Clinics and struggling to raise funds for my surgery - but I can get married.

Recently, when I demanded more than marriage, when I said that it was hard to happy about this, I was told by a queer person half my age that I needed to learn "queer history". Little did that person know, I've been part of this history. Both in the US and now in the UK. I've seen marriage be legal in the UK but the LGBT youth groups I volunteer for run out of funding. I've seen organisations like Stonewall Housing and Gendered Intelligence struggle to provide for the UK's LGBT youth while banks and corporations marched ahead of us in London Pride. I've been fine to be out as bisexual or queer at work, but hesitated to bring up being agender because of how little people understand.

If this piece seems a bit confusing because my feelings are confusing. I've established what part I've played in fighting for equal marriage and how things have changed so much since I was in the first grade, adamantly assuring my classmates I didn't "judge girls that way". Maybe I'm just another greedy bisexual or maybe I'm just older and wiser now - but Marriage is not enough.

So do celebrate now. I know what a big symbol this is for so many people. And when you're done, please turn that Pride float around and come back for trans people, specifically the trans women of colour dying every year - and stop the death. Actualise the vision that Marsha P. Johnson and Sylvia Rivera had when Marsha threw the shot glass the started the Stonewall riot - and stop LGBTQ youth homelessness.

There is still so much more to do. This isn't over.

Agender writer based in London, working in marketing, LGBTQ activist for 12 years.