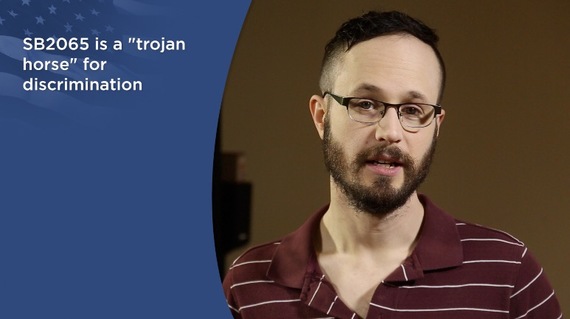 Texas is setting itself up for a showdown with the Supreme Court. A bill to defy the court's rulings died in the House last week, but anti-gay politicians could find a sneaky way to revive it. Meanwhile, the Attorney General of Texas refuses to say if he'll obey the Supreme Court's ruling in June.

Legislators in Texas nearly passed a bill that would have forced the state to defy the Supreme Court last week. But the deadline passed before they could hold a vote, which means the bill's off the table, for now. If it had passed, it would have withheld funding from government offices that obeyed a pro-equality ruling from the Supreme Court.

That could never have withstood a lawsuit. States simply don't get to decide which Supreme Court rulings they want to follow. What's scary is that it an obviously unconstitutional bill even made it this far -- and may still come back. Bill sponsor Cecil Bell says that he might find a way to attach it to some other bill that's still alive. So we're not out of the woods yet.

And there's another dangerous bill that DID pass, but it's getting less attention. That's SB2065, which contains a hidden trojan horse for discrimination. Supporters claim that the bill lets members of the clergy refuse to conduct marriages that violate their conscience. But if that were true, there would be no need for the bill. Religious officials already have the freedom to refuse certain marriages. What the bill actually does is extend that exemption to public officials who have religious affiliations.

So for example, if a city was the hire a minister as justice of the peace, even though he's serving in a government role, he'd be allowed to let his religious rules override the rules of his job. Couples could be turned away from government offices with no recourse. The bill passed the Senate last week, and missed its chance for a vote in the House, but like the other bill could always come back as an amendment.

There are nearly two dozen anti-gay bills working their way through the Texas legislature right now. Many, like Cecil Bell's attempt to defy the Supreme Court, are clearly illegal. But Texas Attorney General Ken Paxton says he'll defend them anyway. What's more, Paxton refused to say whether he would obey Supreme Court orders to allow marriage equality in the state. That could be setting up a showdown between the Supreme Court's orders and the State of Texas's refusal, and it's hard to say who would win. Just kidding, the Supreme Court would win. Eventually. But the last time there was a showdown like this, it took some unpleasant work to sort it out.