I was up in the air when the decision came down.

As soon as my plane landed, my seatmate pulled out her phone (I couldn't bear to look) and her screen lit up with the news: The Supreme Court of the United States had ruled in favor of marriage equality. Love had conquered all!

I grinned. I wept. I pulled out my phone and texted my beloved. "Will you marry me (again)?"

As I scurried through the airport to catch my next flight, I couldn't stop crying. Twenty-six years ago, when my beloved and I married each other for the first time, we never dreamed this day would come. It was September 10, 1989. Two lesbians in love couldn't legally marry anywhere. But that didn't stop us from vowing to have and to hold 'till death do us part. Dressed in our finest, we stood under the chuppah, exchanged gold wedding bands, said "I do," and kissed the brides. 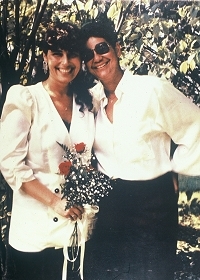 But despite having to check "single" on our tax returns and lie when one of us was in the hospital ("she's my sister"), we knew who we were: a married couple deserving legal rights.

Then came May 17, 2004, the day Massachusetts recognized our right to marry. My beloved and I stood outside Northampton's City Hall and watched hundreds of couples enter and emerge proudly waving their marriage licenses. Bakers handed out slices of wedding cake. Supporters waved signs that read, "Equally ever after." Newscasters wiped tears from their eyes. My beloved, a diehard romantic, convinced me to wait until September 10 -- our 16th anniversary, to re-tie the knot. Wearing the same outfits, we stood in our backyard, recited our vows, re-exchanged our rings and wept as our officiate said the words we never thought we'd hear: "By the power vested in me by the state of Massachusetts, I now pronounce you legally married."

Once more we were married... and we weren't. We were legally married at home in Massachusetts, but not when we visited my parents in New York. Or vacationed in Maine. I was, in effect, my beloved's "unlawfully wedded wife."

The problem was, I was heading for the west coast and my beloved was keeping the home fires burning. Ah, well. If I couldn't be home with her, San Francisco was the next best place to be.

And talk about perfect timing: It was Pride weekend and I was in town to promote the new twenty-fifth anniversary edition of Heather Has Two Mommies at the American Library Association Convention.

After signing countless copies of my book, I headed over to Market Street to watch the Pride Parade. And as I stood there, my eyes misted over as I thought about all the ways the world has changed.

In 1983, I attended my first Gay Pride March, which is what we called it back then. We strode up Northampton's Main Street singing, "Hey, hey! Ho, ho! Homophobia's got to go!" We yelled, "What do we want? Gay rights! When do we want them? NOW!" We chanted, "Two, four, six, eight. How do you know your wife is straight?"

I remember marching beside a teacher who wore a paper bag over her head for fear of losing her job. We passed a minister standing next to a wooden coffin he had dragged onto the sidewalk, yelling that we were all going to hell. We turned in unison, pointed our fingers, and shouted, "Shame! Shame! Shame!" The minister was not deterred. He shouted louder. And no one came to our defense. No businesses, schools or religious groups marched with us. We were out there by ourselves. Volunteer peacekeepers warned us not to walk home alone.

What a difference three decades make! As I watched the San Francisco Pride Parade stream up Market Street and cheered for the Gay Straight Alliances, the Apple employees, the poodles in purple tutus, the PFLAG contingent, the churches, synagogues and politicians, I broke down completely. Even though I couldn't imagine the outcome of Obergefell v. Hodges turning out any differently, I hadn't realized that for weeks, I'd been holding my breath. And I couldn't predict how exhilarating it would feel to no longer be seen as a second class citizen. To see thousands of people taking to the streets with joy. To know that today's LGBT youth live in a new world. To have fought so hard. To have won. 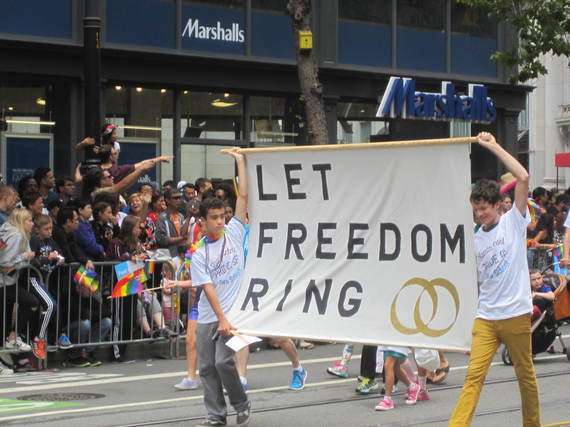 I used up many boxes of tissues during my week's stay in San Francisco. I cried every time a librarian thanked me for writing Heather Has Two Mommies and every time an LGBT children's book author acknowledged me for paving the way. I cried when I visited the James C. Hormel Gay and Lesbian Center at the San Francisco Public Library and gazed at the photo display of LGBT teens all dressed up for their high school proms. I cried when I visited the Human Rights Campaign Activity Center, which occupies the same storefront on Castro Street that had once housed Harvey Milk's camera shop. I cried as I followed the Rainbow Honor Walk through the Castro, especially when I came upon the sidewalk square honoring Allen Ginsberg, my dearly departed mentor, who would have been so delighted to see this day. 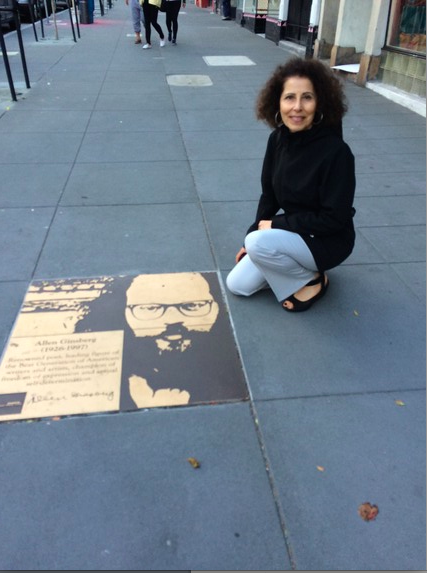 And of course I wept tears of joy when I spotted my beloved at the airport striding towards me with open arms to welcome me home.

PHOTO GALLERY
Gay Pride Around The World
Download
Calling all HuffPost superfans!
Sign up for membership to become a founding member and help shape HuffPost's next chapter
Join HuffPost