The atmosphere of Mars may not have escaped into space billions of years ago, scientists say. Instead, the bulk of Mars' carbon dioxide gas could be locked inside Martian rocks.

Most of Mars' carbon dioxide vanished about 4 billion years ago, leaving a cold planet covered in a thin veneer of gas. But a new analysis of a Martian meteorite claims that some of the carbon dioxide disappeared into Mars itself, and not out into space as previous studies have suggested.

"This is the first direct evidence of how carbon dioxide is removed, trapped and stored on Mars," said Tim Tomkinson, lead study author and a geochemist at the University of Glasgow in the United Kingdom. "We can find out amazing things about Mars from the very small amount of sample that we have." [7 Biggest Mysteries of Mars]

Tomkinson and his colleagues probed the history of the Mars atmosphere by analyzing minerals in a tiny slice of the Lafayette meteorite, a Mars rock blasted toward Earth 11 million years ago. The Lafayette is one of several Martian meteorites called the Nakhlites, thought to have been ejected out of a vast volcanic plateau by a comet impact. 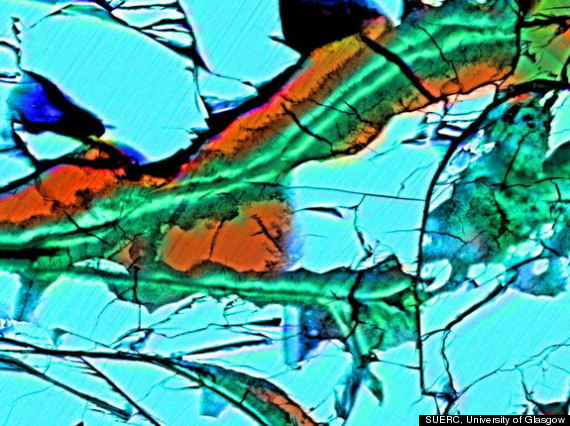 The meteorites are 1.3-billion-year-old basalt, a volcanic rock rich in the mineral olivine. Long before their space journey, water altered the rock, leaving behind microscopic fractures filled with clays and carbonates. Radiometric dating indicates these minerals formed some 625 million years ago. The research is detailed in the Oct. 22 edition of the journal Nature Communications.

Tomkinson's team discovered that Lafayette's siderite, an iron-rich carbonate mineral, formed through carbonation. (This is the same process proposed for carbon sequestration on Earth.) When water and carbon dioxide gas combine with olivine minerals in the basalt, the ensuing chemical reaction creates carbonate and silicate minerals, trapping the gas.

The results mean liquid water flowed on Mars within the last 700 million years, either from geothermal or hydrothermal heating, Tomkinson said. "This process could have been an even bigger player when Mars was thought to be a warmer and wetter planet," he added. "This process was still occurring when conditions were unfavorable for carbonation. It could potentially have been a much bigger mechanism when Mars had a thicker atmosphere 4 billion years ago," Tomkinson told SPACE.com.

The space agency's MAVEN mission, short for Mars Atmosphere and Volatile EvolutioN, will test whether the volatile gases were ripped away into space or trapped on the surface in ice and rocks. One popular model suggests the atmosphere was lost to space when Mars lost its magnetic field. MAVEN's launch window opens Nov. 18.