If a picture is worth 1,000 words, how much are two pictures worth, especially if they show an odd-looking, allegedly descending light heading to the surface of Mars?

These are real pictures, taken by the Curiosity rover -- some reports say it took place on June 23, but according to information on the raw Jet Propulsion Laboratory images, it was June 20.

In the first JPL full resolution image, a bright light appears above some mountains (taken by the rover's Navcam Right camera). Thirty-one seconds later, the rover's Navcam Left camera snapped an image of the light seemingly closer to the Martian surface.

Are we looking at pictures of a UFO headed for a landing near the Curiosity rover? Probably not, says Justin Maki, leader of the team that built and operates Curiosity's navigation camera.

"This is a hot pixel that has been around since we started using the Right Navcam," Maki told The Huffington Post in an email.

Watch this short video showing both images taken above Mars.

Hot pixels, as described by PhotographyLife.com, occur when a camera's sensor becomes hot during long exposures.

This isn't the first time that Curiosity's camera caught something very bright in the distance at the Red Planet.

On April 3, the rover photographed an unusual-looking light shining brightly on the surface of Mars. 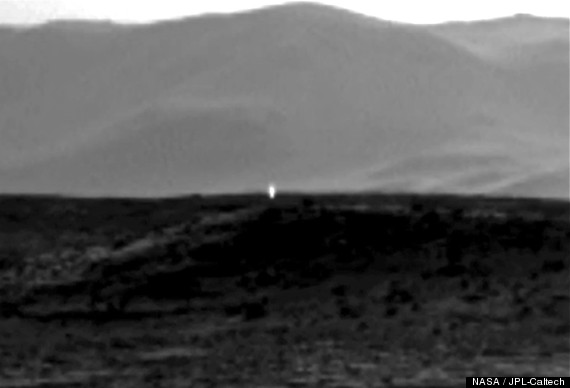 "In the thousands of images we've received from Curiosity, we see ones with bright spots nearly every week," Maki said in a NASA statement. "These can be caused by cosmic-ray hits or sunlight glinting from rock surfaces, as the most likely explanations."