The countdown to the arrival of NASA's Mars rover Curiosity on the Red Planet in early August has begun in dramatic fashion as the mission's engineers prepare for what they call "seven minutes of terror."

"We've got literally seven minutes to get from the top of the atmosphere to the surface of Mars, going from 13,000 miles an hour to zero in perfect sequence, perfect choreography, perfect timing," engineer Tim Rivellini says in a recent NASA video about the mission. "If any one thing doesn't work just right, it's game over."

If all goes as planned, the rover will land softly on the planet with the help of a parachute designed for deployment at supersonic speeds and a rocket-powered sky crane (see image below).

A computer on the sky crane will sense touchdown, disconnect from the rover, and crash land elsewhere. 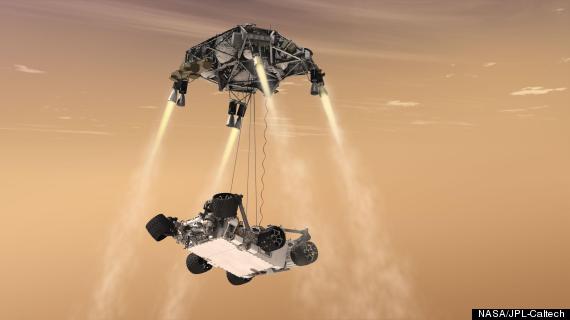 This artist's concept shows the sky crane maneuver during the descent of NASA's Curiosity rover to the Martian surface.

"Twenty meters above the surface, we have to lower the rover below us on a tether that's 21 feet long, and then gently deposit it on its wheels on the surface," engineer Adam Steltzner says in the video.

"It is the result of reasoned engineering thought, but it still looks crazy," he says.

Curiosity is designed to measure how well Mars could sustain life and whether the planet ever had an environment able to support small life forms, according to NASA.

"We have been preparing for years for a successful landing by Curiosity, and all signs are good," Dave Lavery, Mars Science Laboratory program executive at NASA, said in a written statement. "However, landing on Mars always carries risks, so success is not guaranteed. Once on the ground we'll proceed carefully. We have plenty of time since Curiosity is not as life-limited as the approximate 90-day missions like NASA's Mars Exploration Rovers and the Phoenix lander."