A NASA spacecraft has spotted a big gully on Mars, a feature that appears to have formed only within the last three years.

The powerful HiRISE camera on NASA's Mars Reconnaissance Orbiter (MRO) imaged the channel, which is found on the slope of a crater wall in the Red Planet's mid-southern latitudes, on May 25, 2013. The feature was not present in HiRISE photos of the area taken on Nov. 5, 2010. NASA unveiled the image on Wednesday (March 19). 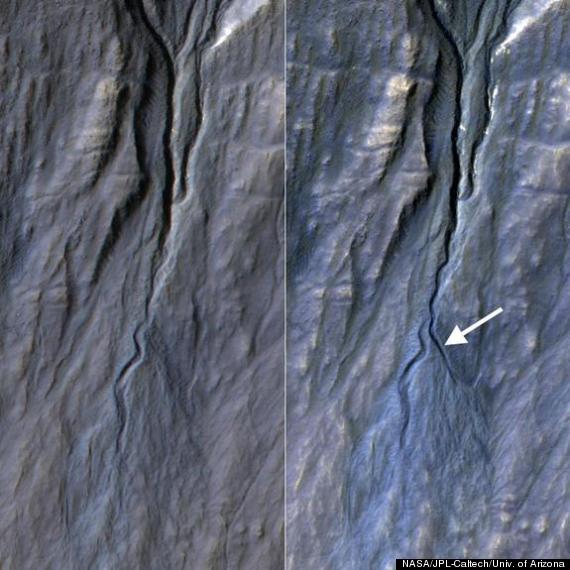 This pair of before (left) and after (right) images from the High Resolution Imaging Science Experiment (HiRISE) camera on NASA's Mars Reconnaissance Orbiter documents the formation of a substantial new channel on a Martian slope between Nov. 5, 2010, and May 25, 2013. The location is on the inner wall of a crater at 37.45 degrees south latitude, 222.95 degrees east longitude, in the Terra Sirenum region. Image released March 19, 2014.

While the Mars gully looks a lot like river channels here on Earth, it likely was not carved out by flowing water, NASA officials said.

"The dates of the images are more than a full Martian year apart, so the observations did not pin down the Martian season of the activity at this site," officials wrote in a description of the gully image on Wednesday.

But, they added, "before-and-after HiRISE pairs of similar activity at other sites demonstrate that this type of activity generally occurs in winter, at temperatures so cold that carbon dioxide, rather than water, is likely to play the key role."

However, MRO has observed other Martian features that do seem associated with liquid water — dark streaks known as recurring slope lineae.

RSL lines snake down crater walls and other slopes during warm weather on the Red Planet, and some researchers think they're caused by briny water that contains an iron-based antifreeze. Direct evidence of flowing water at RSL sites, however, remains elusive.

If water does flow across the surface of present-day Mars from time to time, the planet would be a likelier bet to host life as we know it. Here on Earth, life teems pretty much anywhere liquid water exists.

Ancient Mars was much more hospitable to life. For example, NASA's Curiosity rover discovered an ancient lake-and-stream system near its Red Planet landing site that could have supported microbial life billions of years ago.