Scientists have found a strange structure resembling a microbial cell inside a Martian meteorite, but they're not claiming that it's evidence of Red Planet life.

The researchers discovered the microscopic oval object within the Nakhla Mars meteorite, which fell to Earth in Egypt in 1911. While the structure's appearance is intriguing, it most likely formed as a result of geological rather than biological processes, team members said. 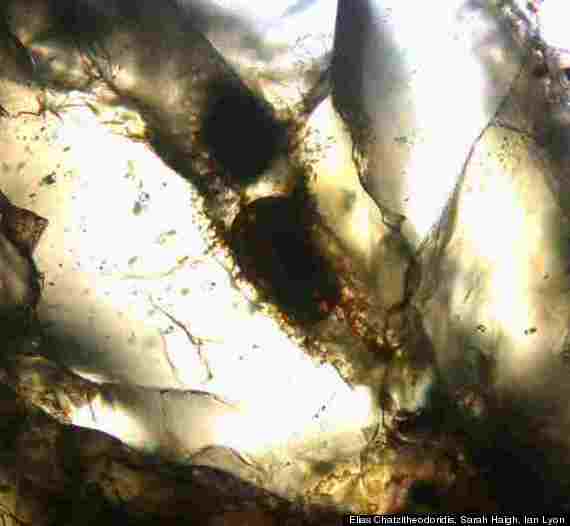 Transmitted light photomicrograph of an oval structure (center) in the Mars meteorite known as Nakhla. There is no evidence that the ovoid is a sign of Martian life, researchers say.

"The consideration of possible biotic scenarios for the origin of the ovoid structure in Nakhla currently lacks any sort of compelling evidence," the scientists write in a new study published this month in the journal Astrobiology. "Therefore, based on the available data that we have obtained on the nature of this conspicuous ovoid structure in Nakhla, we conclude that the most reasonable explanation for its origin is that it formed through abiotic processes." [The Search for Life on Mars (A Photo Timeline)]

The hollow ovoid is about 80 microns long by 60 microns wide, researchers said — far larger than most terrestrial bacteria but in the normal size range for eukaryotic Earth microbes (single-celled organisms that possess nuclei and other membrane-bound interior "organelles"). The study team is confident that the object is native to the sample and not the result of terrestrial contamination.

The scientists studied the structure using a number of different techniques, including electron microscopy, X-ray analysis and mass spectrometry. This work revealed that the ovoid is composed of iron-rich clay and contains a number of other minerals.

The researchers run through a number of possible formation scenarios in the new study, eventually concluding that the ovoid most likely formed when materials partially filled in a pre-existing vesicle — a vapor bubble, for example — in the rock.

But this supposition doesn't rule out the possibility that Martian lifeforms had something to do with the structure, team members said.

"Despite the extremely biomorphic overall shape of the ovoid, it is highly unlikely that it itself was an organism," said lead author Elias Chatzitheodoridis, of the National Technical University of Athens in Greece.

"However, it could have been formed directly by micro-organisms, or it could trap organic material that came from elsewhere," Chatzitheodoridis told Space.com via email. "That the ovoid is hollow means that there is enough space to accommodate colonies of microorganisms."

Making a firm link to Mars life would require further study and further discoveries, he added.

"We would be happy if we could have found more than one ovoid, with exactly the same texture both in the micro and the nanoscale," Chatzitheodoridis said. "However, we require to open up enough sample in a very careful way. Compelling evidence, though, would be if we could really find many of the same, clearly in a form of a colony, together with chemical and mineralogical biosignatures that are common for terrestrial microbes."

Nakhla is a well-studied meteorite — scientists have spotted possible signs of Mars life within it before —and previous research has mapped out its history in some detail. Nakhla's parent rock apparently crystallized about 1.3 billion years ago, Chatzitheodoridis and his colleagues write in the new study, then experienced two shock events that heated it up considerably.

The first of these shocks likely occurred around 910 million years ago and the second 620 million years ago. This latter event, which was triggered by a nearby meteorite strike on Mars, apparently included the flow of hot water through Nakhla's parent outcrop, the authors write. Finally, about 10 million years ago, another impact blasted Nakhla free of Mars, sending it on a looping trip through space that ended with its arrival at Earth in 1911.

Whether or not the Nakhla ovoid has some connection to Martian life, study of the meteorite can help researchers better understand the Red Planet's past (and, perhaps, present) potential to support life, Chatzitheodoridis said.

Martian meteorites contain "important information, and latest work has shown that now one has to look more carefully at them and in finer detail," he told Space.com.

"In our case, it is such work that allowed us to see from a small volume of sample a big story, i.e., that hydrothermal waters have actually acted also in the latest periods of Martian history, even if they were caused by a bolide impact, and that they were capable of initiating a number of complicated processes that resulted in the formation of niche environments which can sustain life, if life [ever] emerged on the planet," Chatzitheodoridis added.