Amateur stargazers have discovered an intriguing object jutting out from the surface of Mars. The seemingly perfectly rectangular, upright structure, found in NASA images of the Red Planet, bears a striking resemblance to the monoliths planted on Earth and the moon by aliens in the classic sci-fi film "2001: A Space Odyssey."

The object in question was first spotted several years ago after being photographed by the HiRISE camera onboard the Mars Reconnaissance Orbiter, a NASA space probe; every so often, it garners renewed interest on the Internet. But is it unnatural — a beacon erected by aliens for mysterious reasons, and even more mysteriously paralleled in the imaginations of Stanley Kubrick and Arthur C. Clarke, creators of "2001"? Or is this rock the work of nature? [Photo ]

According to Jonathon Hill, a research technician and mission planner at the Mars Space Flight Facility at Arizona State University, who processes many of the images taken during NASA's Mars missions, the object in question is no more than a roughly rectangular boulder.

The HiRISE camera that photographed it has a resolution of approximately 1 foot (30 centimeters) per pixel — impressive considering the 180-mile (300-kilometer) altitude from which it photographs the Martian surface, but not quite sharp enough to capture the cragginess of a mid-size boulder. "When your resolution is too low to fully resolve an object, it tends to look rectangular because the pixels in the image are squares. Any curve will look like a series of straight lines if you reduce your resolution enough," Hill told Life's Little Mysteries.

The location of the boulder at the bottom of a cliff near many other boulders suggests it broke off the cliff and tumbled to its current spot sometime in the distant past, Hill said. Such a perilous location is itself an argument against deliberate placement by aliens: "If I was going to build a monolith somewhere, that's the last place I would put it!" he said. "The debris falling from the cliff would cover it up pretty quickly, on geologic timescales." [Vote: Do You Believe in Life on Mars?]

Hill added that the height of the boulder is being exaggerated in the photo by a low sun angle. Photographed when the sun was near the horizon, the boulder casts an especially long shadow.

The ufologists aren't necessarily wrong in calling it a monolith — the word simply translates from Latin as "one stone." But this monolith isn't the masonry of Martians. 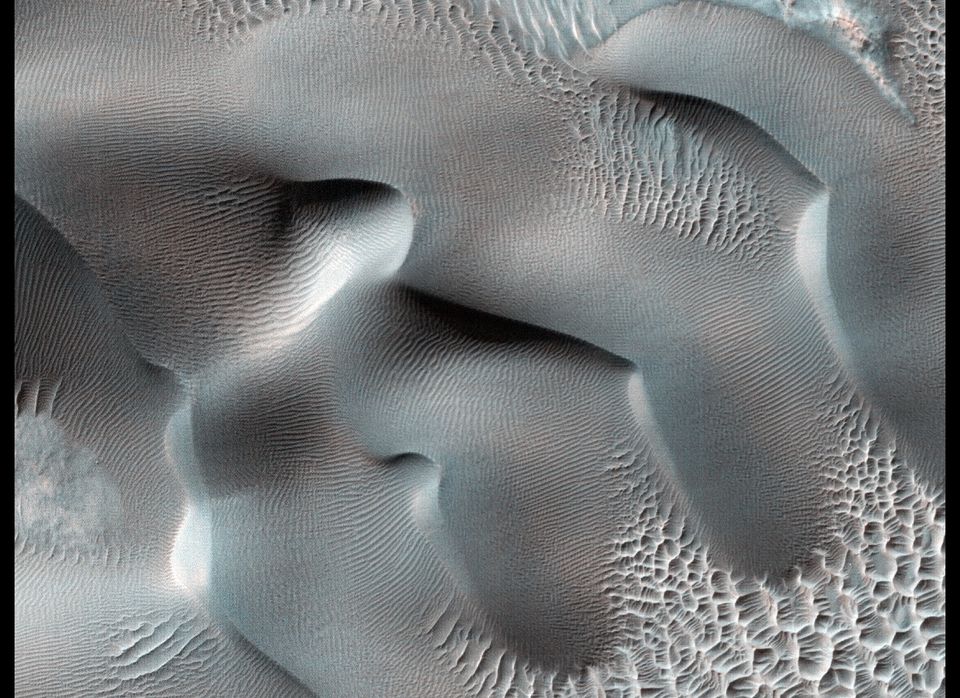 1 / 6
Dune Composition
This image shows sand dunes in a crater on Noachis Terra. <a href="http://www.uahirise.org/ESP_025042_1375" target="_hplink">From NASA</a>: "Sand dunes are among the most widespread aeolian (wind-formed) features present on Mars. Their spatial distribution and morphology are affected by changes in wind direction and wind strength."
NASA/JPL/University of Arizona