A weird circular landform recently spotted on the surface of Mars might look like a deformed waffle--or maybe the surface of a human brain. But as to what the strange feature really is--and how it got there--scientists at this point have only opinions. 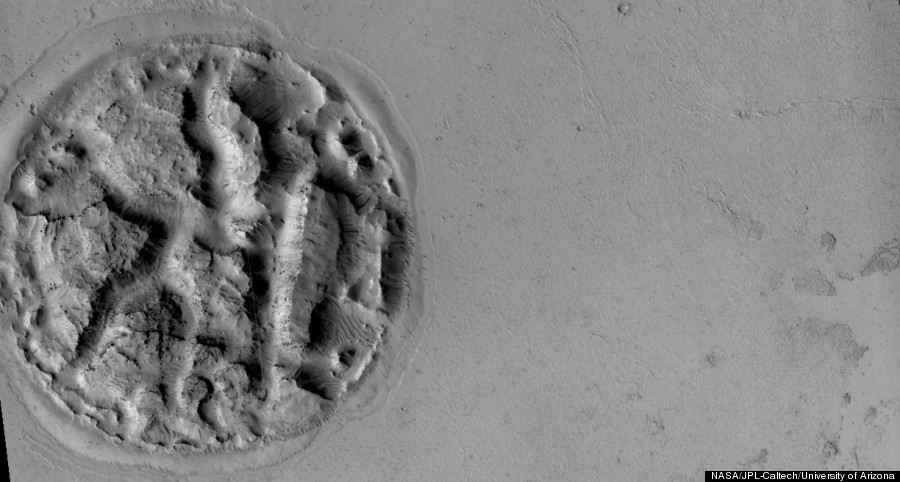 An image of the enigmatic landform on Mars taken by HiRISE, one of six instruments on NASA's Mars Reconnaissance Orbiter. The image was released by NASA on Wednesday, Dec. 3.

The 1.2-mile-wide mound, which was observed by NASA's Mars Reconnaissance Orbiter Spacecraft, is located in the planet's Athabasca region--an area known for lava flows.

So scientists at NASA's Jet Propulsion Laboratory in Pasadena, Calif., offered this hypothesis in a written statement on Wednesday:

"It is highly possible that volcanism played a role in creating this feature. Perhaps lava has intruded underneath this mound and pushed it up from beneath. It looks as if material is missing from the mound, so it is also possible that there was a significant amount of ice in the mound that was driven out by the heat of the lava. There are an array of features like this in the region that continue to puzzle scientists."

The scientists hope that further observations and analysis of the image will yield a better explanation of the mound and its formation.

The Mars Reconnaissance was launched in August 12, 2005 on an ongoing mission to study the red planet.