It's a question that has sparked much controversy among scientists and astronomy buffs: Was there once an ocean on Mars?

And now it seems we may now be one step closer to an answer.

Researchers from the California Institute of Technology believe they have uncovered strong evidence of a Martian ocean -- an ancient body of water that may have covered as much as one-third of the planet billions of years ago.

"One of the more provocative ideas concerning the history of water on mars is there was once an ocean covering the northern area of the planet," study co-author Roman DiBiase, a postdoctoral geology scholar at Caltech, told The Huffington Post. DiBiase added that the team's findings -- published in the Journal of Geophysical Research -- are consistent with this longstanding hypothesis of an ocean on Mars.

Using high-resolution images from the Mars Reconnaissance Orbiter, the researchers examined a 38-square-mile area in the Aeolis Dorsa region that may contain a former coastline. The range is characterized by hilly ridges called inverted channels, which scientists believe show traces of an ancient water system. 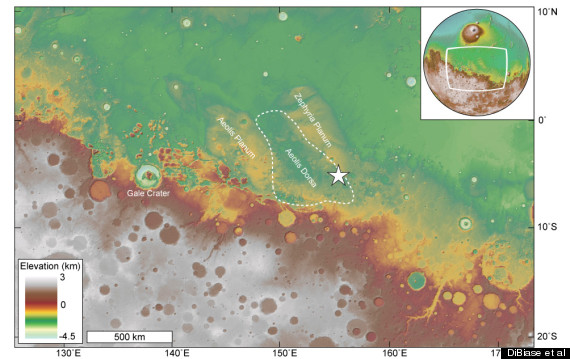 The team focused on the area's topography and sedimentary rock layers in order to determine the slope of these ancient channels, which would indicate the direction of water flow. DiBiase said that interpreting the direction of flow is key.

Rather than converging, as previously believed, the water lines appear to spread out, suggesting that the channels were part of a delta that deposited water into a larger body of water, such as an ocean or regional sea, DiBiase said.

Though this is not the first time scientists have uncovered evidence of an ancient delta on Mars, previous findings were geographically confined. In 2010 the European Space Agency's Mars Express spotted in the southern hemisphere a delta constrained within a 40-mile-wide crater, meaning the largest body of water that the channel could have filtered into would have been a lake.

However, as the Caltech team notes in its recent study, this is not the case with their finding.

"The location of our delta and other similar features within Aeolis Dorsa implies a large standing body of water spanning at least [100,000 square kilometers] and potentially far larger based on a complete lack of conﬁning topography," the researchers write.

The ESA's Mars Express spacecraft detected sedimentary evidence last February that a large ocean once existed on Mars in the northern plains, where the Caltech study's region is located.

"Scientists have long hypothesized that the northern lowlands of Mars are a dried-up ocean bottom, but no one yet has found the smoking gun," study co-author Mike Lamb, assistant professor of geology at Caltech, said in a statement released by the university.

The Caltech team plans to analyze further sedimentary data to bolster their finding. But at this point, they estimate the ancient Mars ocean spanned the entirely of the Aeolis Dorsa region's 100,000 square kilometers (nearly 39,000 square miles). 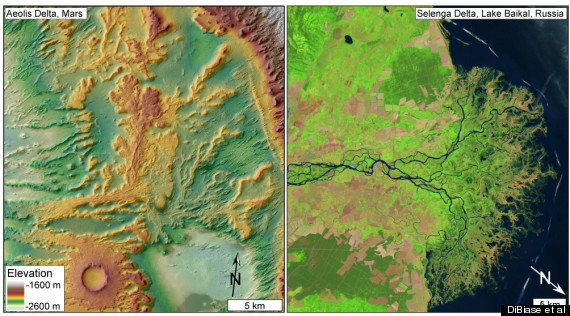 Comparison of exhumed delta in sedimentary rocks on Mars (left) with a modern delta on Earth (right). On the left, a shaded relief map shows elevated, branching, lobate features in Aeolis Dorsa, Mars, interpreted as resistant channel deposits that make up an ancient delta. These layered, cross-cutting features are typical of channelized sedimentary deposits on Earth and here are indicative of a coastal delta environment. (Credit: DiBiase et al./Journal of Geophysical Research/2013 and USGS/NASA Landsat)