WASHINGTON — A group of volunteers hoping to become the first human Martians congregated in one spot for the first time Saturday (Aug. 3) to discuss their hopes to join the Mars One mission, a project to send colonists on a one-way trip to the Red Planet.

Mars One CEO and co-founder Bas Lansdorp addressed a crowd of about 50 Mars One applicants, almost all male, in an auditorium here at George Washington University. The mood at the event, which was webcast live, was something akin to a gamer's LAN party — excited discussions blended with nerdy banter. But the purpose was serious. 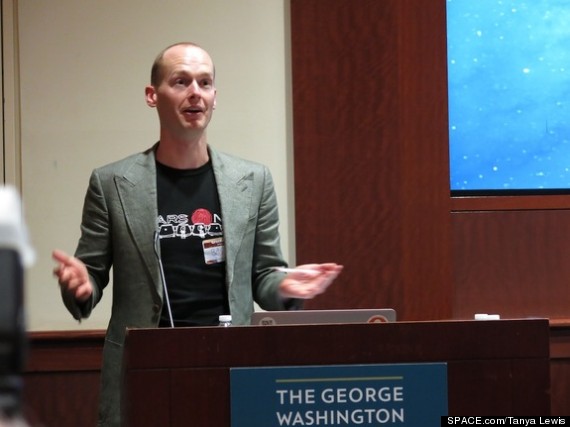 Mars One co-founder Bas Lansdorp addresses the Million Martian Meeting in Washington, D.C. on Aug. 3, 2013 to discuss plans for a Mars colony mission in 2023.

"How many of you want to go on a one-way trip to Mars?" Lansdorp asked. Nearly everyone raised their hands. [Mars One’s Red Planet Colony Project (Gallery)]

The Mars One colony mission, announced in May 2012, aims to send humans to Mars in 2023. Yet unlike other proposed manned Mars missions, they won't be coming back.

The colonists will be sent in groups of four, and the first group will have two men and two women, hailing from four different continents. The company is accepting applications from anyone over the age of 18, through August 31. The response has been overwhelming — as of May, some 78,000 Mars colonist applications had been received. 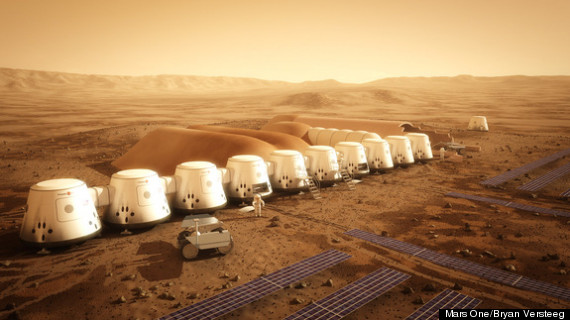 In June 2025, the second crew of Mars One pioneers is slated to land on Mars in this artist's illustration. The Mars One project aims to send volunteer astronauts to the Red Planet beginning in 2023 to colonize Mars.

A colony on Mars

Robert Zubrin, president and founder of the Mars Society and an advocate for manned exploration of the red planet, kicked off the meeting. Somewhat fittingly, he joined the meeting remotely via video chat.

"I think this is the most important thing going on in the world today," Zubrin said. He likened the colonization of Mars to humanity's expansion from a few tribes in a Kenyan rift valley to a global species. "Right now we have the prospect of taking this to the next step, of breaking out of planet Earth and going from a global species to a multi-planet, space-based species," he said.

Zubrin went on to explain why Mars was more suitable for a colony than the moon, and elaborated on the heavy lifter technology needed to supply such a mission, which he thinks is technically feasible. He also lamented NASA's "avoidance" of pursuing a manned Mars mission.

Afterwards, there was a screening of the film "One Way Astronaut," a documentary about some of the Mars One applicants. A YouTube trailer is available online, and the full movie is available via pay-per-view via: http://www.onewayastronaut.com/ 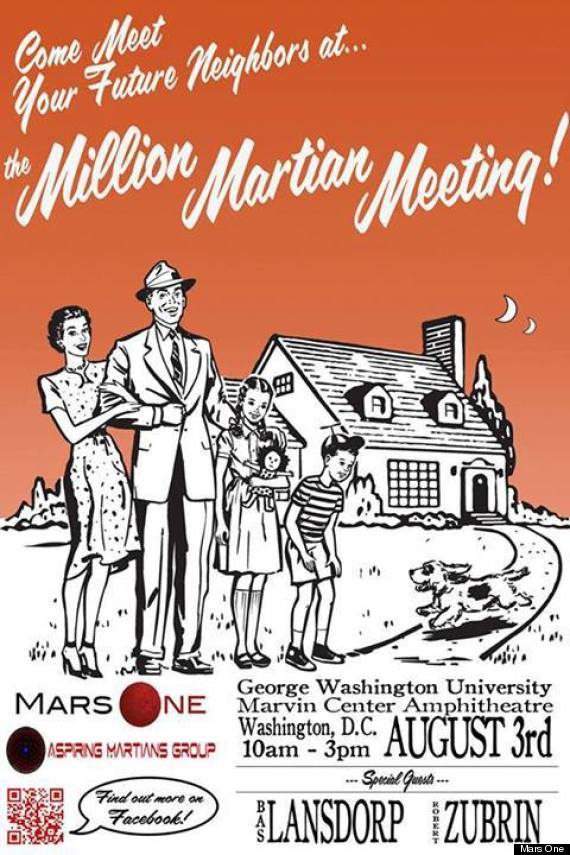 A poster for the Mars One project's Million Martian Meeting to discuss plans for a Mars colony mission in 2023. The meeting was held in Washington, D.C. on Aug. 3.

Four Mars One applicants (three men and a woman) were on-hand to answer questions about their decision to apply: a married doctor, a married physics student, a hotel manager, and a graduate student in applied intelligence.

So why leave everything behind to go to Mars? "It's literally something that I've wanted forever," said Aaron Hamm, the hotel manager.

"You're kind of born knowing that you want to travel," added Joseph Sweeney, the graduate student who founded the Aspiring Martian Group on Facebook. Even if the risk of failing were 99 percent, Sweeney said he would go.

"I have wanted to go to space for as long as I can remember," Sara Director, one of the few female applicants, told SPACE.com.

Only 20 percent of the applicants have been female, Lansdorp said.

The meeting concluded with a talk by Lansdorp himself about the history of Mars One and his hopes for the mission. The technology exists to send people on a one-way trip to Mars, so the biggest challenge will be funding, Lansdorp told SPACE.com.

The company estimates that getting the first crew to Mars will cost about $6 billion, to be be funded primarily through a reality-TV program about the red planet's first colonists.

Skeptics of the mission abound, but they weren't present today. Technical and financial hurdles aside, many people balk at the idea of a one-way trip.