Who would you want to go to Mars with?

"You're gonna need at least two Scottys and two Spocks," Mars One finalist Cody Don Reeder says, without hesitation. A mechanic and bee-keeper, Reeder hopes to claim one of the "Scotty" slots for the upcoming mission.

Finalizing crew roles for the Mars One mission is a long ways down the road (interviews for the 705 candidate finalists have yet to be scheduled), but you can be assured that everyone involved is already thinking about crew make-up, not only how they'll mesh on the cramped seven-month journey, but how they'll live as a tiny colony once they arrive: four people putting down roots on Mars means your crewmates become your Mars homies, like forever.

Mars One CEO Bas Lansdorp is committed to selecting and sending two women and two men from three or four continents on the initial mission to Mars. He points to scientific research that proves varying genders, ages and cultural backgrounds among team members result in a more successful team.

"The more diverse your team is," he says, "the better it performs."

So who should those people be? When I recently asked several Mars One finalists to describe their ideal crewmates, traditional crew roles were rarely mentioned, but everyone had something to say about the personalities of those they'd most appreciate by their sides if chosen for this momentous space adventure.

"Somebody who's willing to be everybody's wingman," Kay Radzik Warren describes her ideal crewmate. "I think we're just gonna be a whole crew full of wingmen," she says.

Sonia Van Meter agrees. "A crew who can take things in stride, that don't get frustrated easily, that are problem solvers... and are likable individuals."

"I want to go to Mars with people who actually want to be there for selfless reasons," Kenya Armbrister says.

I'm not sure even Mother Teresa or Gandhi could crack the top-tier of this list. I'm thinking Mars One is looking for far more than qualified and intrepid space explorers; they're looking for super heroes -- or at least the super heroic.

Every Mars One finalist has to believe in and expect the best from his/her crewmates. If you aren't willing to sacrifice your own well-being for the good of your crewmates and the success of the mission, well, then, why the hell would anybody want you as a crewmate?

Every time I hear other Mars One candidates talk about the mission, and in particular their expectations for fellow crew members, my own feelings of inadequacy run rampant. What does it say about me that my ideal crew mate would not be a resourceful engineer or a smarty-pants science officer, not even an ultra-cool communications officer or a swashbuckling captain. I'm going to need a McCoy.

At my age (I'll be 75 when the first Mars One ship touches down), I have to wonder whether I'll have the physical strength, the agility, and the endurance to do what's expected of me. My body may fail along the way or soon after arrival. Physical decline does not inspire confidence. Will my health become an issue nobody wants to deal with, least of all, me?

There's no training that will enable us to survive on Mars -- because ultimately, we won't. Each of us goes there with a built-in expiration date. If we accept the reality of a one-way mission to Mars, then each of us will have to face the prospects of arthritis on Mars, dementia on Mars, the need for long-term nursing care on Mars. It's just more likely that the older crew members will encounter these declining health issues sooner. 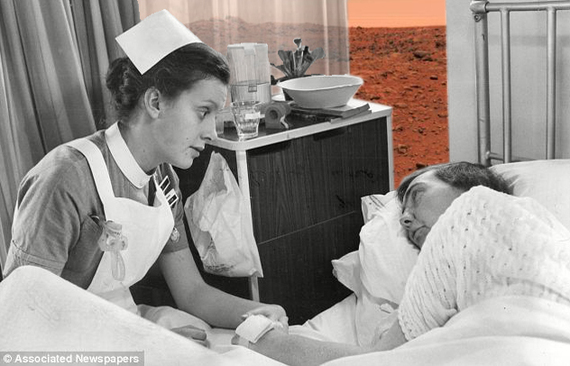 Can I endure my senior years without the health care I'm accustomed to here on Earth? What will the end of my life be like on a planet I've only recently adopted as my home? Will I suffer? Will there be enough morphine? Am I being too much of a worry wart?

Perhaps that noble wingman or wingwoman who'll someday sit by my side and hold my hand until I pass -- even if there's a raging sandstorm outside and all life-support systems are under siege -- will represent a time when space heroics move beyond the best Hollywood scripting, when survival is no longer the goal, when we will encounter the unknown in those meta-human moments that transcend both life and death.

Living -- and dying -- on Mars will ultimately bring out the super-sci-fi-hero in all of us.